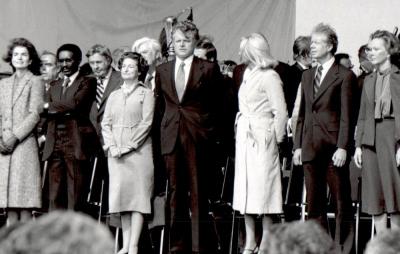 For all who knew President Kennedy, this moment is a culmination, a happy rendezvous with history that makes his memory come alive.

In dedicating this library we honor Jack. And in honoring Jack, we honor the best in our country and ourselves.

He loved this city with a patriot's love. He loved the sea with a sailor's love. And so he would have loved this site and the library his family and friends and country have built to celebrate his life.

I can see him now, standing by the shore, feeling the salt breeze, drinking in the beauty of this harbor, recalling its rich history and the great events that took place here when America was born.

He would look out across the ocean to the horizon and beyond. In his mind's eye, he would see his immigrant heritage, the green and rocky shores of the land of his ancestors, the Ireland whence he came.

In dedicating this library, we also honor those who helped to make this dream come true. The magnificent buildings and landscape, the films and exhibits you will see inside --these and other works reflect years of devotion to the creation of this library that can never be repaid.

On behalf of our family that loved him so deeply, I express the gratitude we feel to those who made Jack's journey with us. We welcome the wide circle of friends from home and overseas gathered here, who found so much inspiration in his life, so much warmth in his friendship, so much pain in his loss.

We thank President and Mrs. Carter for being with us today, and for the support and assistance of the Administration over the past three years in helping to complete the library and make it part of the fine system of Presidential libraries the nation has today.

Others, too, deserve our gratitude:

--I.M. Pei, at the pinnacle of his powers, for creating as Jack's library this great architectural masterpiece of our time.

--Ivan Chermayeff and Charles Guggenheim, for the imagination and skill they used in the exhibits and films, capturing the essence of Jack's life from the detailed records and actions of his Presidency.

--Dave Powers, Dan Fenn, Angelique Lee, Don Dowd and the other men and women of GSA and the library staff and corporation who brought this day about.

--The millions, young and old, from America and around the world, who believed in Jack and whose gifts, large and small, helped to make this library possible.

--The University of Massachusetts and the communities of Dorchester and Columbia Point, who have welcomed us as friends and neighbors, and who have made us happy in this home.

--And, finally, we thank those within our family, especially Jacqueline and Ethel and Steve and Pat, whose labors of love over months and years steered us through the storms of the past and brought our ship safely to this port.

Dorchester itself has a special affection for us, as the place where it all began, as the childhood home that Rose Elizabeth Fitzgerald left when she married Joseph Patrick Kennedy sixty-five years ago this month. Our parents were proud of their family, proud of their nine children. I know the pride my mother feels today. And I know the pride my father would have felt, could he have been here with Rose to witness this honor for their son.

To those who come here, this library will also tell the story of another son, Robert Kennedy, who was at Jack's right hand in all those years of preparation, who shared the time of triumph, who picked up the fallen standard and held it high again.

This library will be more than just a collection of photographs and objects under glass. It will be a living memorial at many levels.

Here in Boston, it will take up the causes of the community, helping to revitalize this section of our city.

Across the country, it will reach out to visitors and scholars, summoning young men and women to careers in public life.

For the great and humble in other lands, it will be a beacon signaling the message of this nation, a lighthouse bearing witness to Jack's truth that America at its best can truly light the world.

He and I had a special bond, despite the 14 years between us. When I was born, he asked to be my godfather. He was the best man at my wedding. He taught me to ride a bicycle, to throw a forward pass, to sail against the wind.

As President, Jack was a glory on the mountaintop. The New Frontier of which he dreamed touched deep and responsive chords in the American character. He could make lightning strike on the things he cared about. He was an irresistible force that made immovable objects move.

He taught us to redeem the promise of health care for America's senior generation, to whom the nation owes so much of its present greatness.

He taught us to control the atom, to end the threat of nuclear annihilation, so that we could leave our children a safer world.

He taught us to make freedom ring in America --freedom for black and brown as well as white; freedom to live and work and vote; freedom to sit at a public lunch counter, to learn in a public classroom, to play football on a public field.

He added a new dimension in foreign policy by tapping the idealism of our youth. He led us beyond our planet and launched us toward the moon. And in our own hemisphere, he summoned us to a new alliance of effort for the benefit of those less fortunate than ourselves.

That is the way it was with Jack. There was a sense of progress and adventure, a rejection of complacency and conformity. There was a common mission, a shared ideal, and above all the joy of high purpose and great achievement.

Jack believed that Americais promises, that challenges are opportunities in disguise, that our spirit can soar again.

With his gift of history, he understood that America is at its best when the nation is on the move, when ideas are on the march.

With his gift of politics, he became a resourceful architect of unity amid the rich and sometimes brawling diversity of this land.

With his gift of statesmanship, he made America the apostle of peace and strength in a troubled and divided world.

With his gift of compassion, he touched the hearts of peoples everywhere who
believed in this nation's destiny of freedom and opportunity and sought it for themselves.

With his gift of humor and vitality, he brought an atmosphere of wit and vigor to everything he did.

And with his gift of words, he found a lever that could move the world.

His passion for the sea would have made him a great explorer. He might have sailed with Magellan, navigating beyond the charts to the new and better world he sought.

His life was a voyage of discovery, a quest for excellence that inspired universal trust and faith. In that brief unfinished journey, he made us believe once more in the great historic purpose of this land. He filled America with pride and made the nation young again.

It was all so brief. The thousand days are like an evening gone. But they are not forgotten. Those whose lives he touched will never be the same. They responded to his call, devoting their own lives to their country, bringing out the best in others as he brought out the best in them.

Early in January 1961, preparing to come to Washington for Inauguration Day, Jack went before the Massachusetts legislature to bid farewell:

"Today," he said, "the eyes of all people are truly upon us, and our governments, in every branch, at every level, must be as a city upon a hill."

These buildings that bear his name will be his city upon his hill.

And now, in dedicating this library to Jack, we recall those years of grace, that time of hope. The spark still glows. The journey never ends. The dream shall never die.