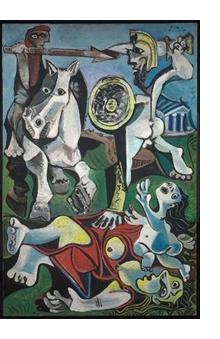 BOSTON, MA (October 4, 2012) – The Museum of Fine Arts, Boston (MFA), and the John F. Kennedy Presidential Library and Museum, two of Boston’s preeminent cultural institutions, have partnered to mark the 50th Anniversary of the Cuban Missile Crisis, the 13 days in October 1962 that brought the United States and the Soviet Union to the brink of nuclear war.

In a ceremony celebrating the first-ever loan from the Museum of Fine Arts to the JFK Library, Caroline Kennedy, President of the John F. Kennedy Library Foundation, and Malcolm Rogers, Ann and Graham Gund Director of the MFA, unveiled Pablo Picasso’s larger-than-life masterpiece, Rape of the Sabine Women (1963), inspired by the Cuban Missile Crisis. Rape of the Sabine Women will go on display next to the Cuban Missile Crisis film and exhibit at the JFK Library on October 5, 2012, and it will be on view through January 6, 2013.

“We are thrilled to partner with the Museum of Fine Arts as we commemorate one of the most historic moments of my father’s presidency,” said Caroline Kennedy, President of the John F. Kennedy Library Foundation. “President Kennedy asked us to never forget that art is not a form of propaganda; it is a form of truth. How very honored we are to be able to present this masterpiece by Picasso about the horrors of war.”

Painted when he was 82, Rape of the Sabine Women is Picasso's last major history painting, a denunciation of the atrocities of war. Picasso transforms a familiar subject from art of the past: the story of early Romans who, suffering a shortage of marriageable women, invited the neighboring Sabine tribe to Rome and proceeded to carry off all of their young women. Against a sunny background of blue sky and green fields, the overlapping forms of grotesquely distorted figures are compressed into the foreground space, with horses and soldiers trampling a woman and her child.

“The commemoration of the 50th anniversary of the Cuban Missile Crisis presented a unique opportunity for the MFA to lend a work from its collection to the John F. Kennedy Library and Museum,” said MFA Director Malcolm Rogers. “President and Mrs. Kennedy were champions of the arts, and we are honored to lend Picasso’s powerful masterpiece inspired by the Cuban Missile Crisis—one of the great treasures of our collection—in remembrance of this pivotal moment in our nation’s history.”

October 16, 2012, marks the 50th anniversary of the Cuban Missile Crisis, one of the most perilous moments in American history, and certainly the greatest test of John F. Kennedy’s presidency. For 13 days in October 1962, a confrontation between the United States and the Soviet Union brought the world to the brink of nuclear destruction and threatened to end mankind. As the world waited and hoped for a peaceful resolution to the Cuban Missile Crisis, President Kennedy and his advisors swiftly negotiated with Soviet Premier Nikita Khrushchev to craft a diplomatic resolution for the removal of Soviet intercontinental missiles from Cuba.

The loan of Pablo Picasso’s tour de force also underscores the legacy created by President Kennedy and Jacqueline Kennedy of preserving and embracing the arts in the White House. In one of his most memorable addresses on October 26, 1963, President Kennedy stressed the importance of the artist in American society in front of students at Amherst College, stating:

“If sometimes our great artists have been the most critical of our society, it is because their sensitivity and their concern for justice, which must motivate any true artist, makes him aware that our nation falls short of its highest potential. I see little of more importance to the future of our country and our civilization than full recognition of the place of the artist.”

President Kennedy felt it essential for the president to demonstrate a regard for and recognition of cultural and intellectual excellence, and he and Mrs. Kennedy hosted a number of the nation’s leading artists, writers and musicians during their White House years. In doing so, they hoped to focus national attention on the role of the arts in America and encourage the development of Washington, D.C. as a cultural center.

The John F. Kennedy Presidential Library and Museum is administered by the National Archives and Records Administration and supported, in part, by the John F. Kennedy Library Foundation, a non-profit organization. The John F. Kennedy Presidential Library and Museum and the Kennedy Library Foundation seek to promote, through scholarship, educational and community programs; a greater appreciation and understanding of American politics, history, and culture; the process of governing and the importance of public service. The Kennedy Presidential Library and Museum is open daily from 9:00 a.m. to 5:00 p.m., with the exceptions of Thanksgiving Day, Christmas Day, and New Year’s Day. The Library is located in the Dorchester section of Boston, off Morrissey Boulevard, next to the campus of the University of Massachusetts/Boston.

General admission to the Museum at the John F. Kennedy Presidential Library is $12.00. Admission for seniors over the age of 62 and college students with appropriate identification is $10.00, and for children ages 13-17, $9.00. Children ages 12 and under are admitted for free. For more information, call (866) JFK-1960 or visit www.jfklibrary.org.

The Museum of Fine Arts, Boston (MFA), is recognized for the quality and scope of its encyclopedic collection, which includes an estimated 450,000 objects. The Museum’s collection is made up of: Art of the Americas; Art of Europe; Contemporary Art; Art of Asia, Oceania, and Africa; Art of the Ancient World; Prints, Drawings, and Photographs; Textile and Fashion Arts; and Musical Instruments. Open seven days a week, the MFA’s hours are Saturday through Tuesday, 10 a.m. – 4:45 p.m.; and Wednesday through Friday, 10 a.m. – 9:45 p.m. Admission (which includes one repeat visit within 10 days) is $25 for adults and $23 for seniors and students age 18 and older, and includes entry to all galleries and special exhibitions. The Museum is closed on New Year’s Day, Patriots’ Day, Independence Day, Thanksgiving, and Christmas. For more information, visit www.mfa.org or call 617.267.9300. The MFA is located on the Avenue of the Arts at 465 Huntington Avenue, Boston, MA 02115.