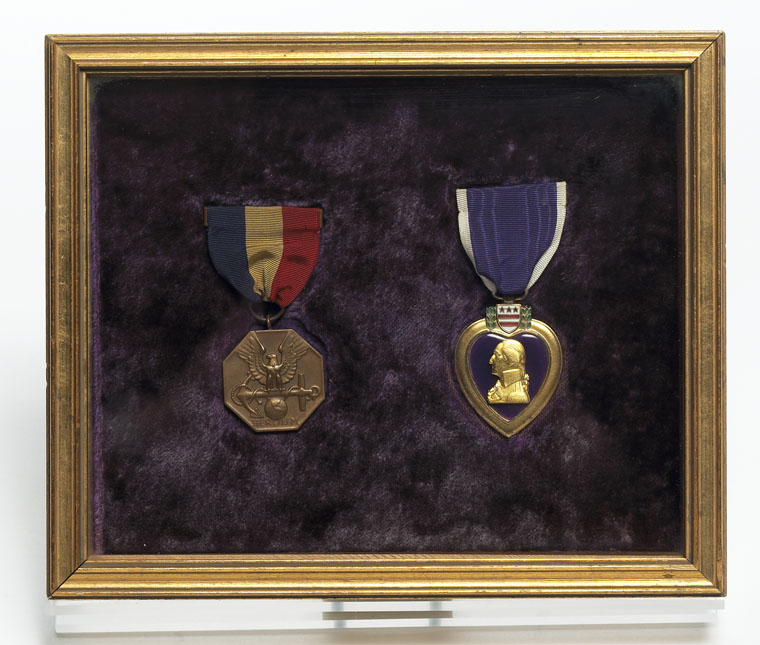 Description: Framed together are the Navy Marine Corps Medal and the Purple Heart

The Navy Marine Corps Medal (on left) is an octagonal shaped medal depicting an eagle perched on a fouled anchor, beneath which is a globe and raised inscription "HEROISM", suspended from a blue, gold and scarlet ribbon.

The Purple Heart (on right) is a heart shaped decoration depicting the profile of George Washington set in purple enamel surrounded by a gold border, suspended from a purple silk ribbon with white borders.  At the top of the heart is the Washington Coat of Arms consisting of a white shield with two horizontal red bars below three red stars, set between sprays of green leaves.  The reverse shows a raised bronze heart and "FOR MILITARY MERIT".

The medals were presented to Lt. Kennedy in June 1944 for his heroics and injuries sustained in the rescue of the crew of PT 109 during WWII on August 2, 1943 when the motor torpedo boat was struck by a Japanese destroyer.