Scale Model of the Gemini Spacecraft 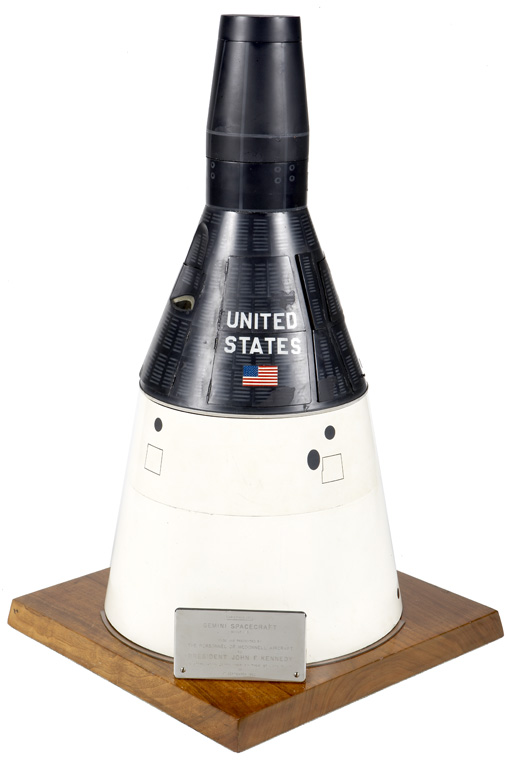 Model of the Gemini Spacecraft which includes three major modules.  The lowest part of the model capsule is divided into two sections and houses retrograde rockets, thrusters, propellant tanks, drinking water, electrical power system and instrumentation equipment.  The middle section of the spacecraft, or landing module, contains the cabin which holds two seated astronaut dolls in ejection seats facing the control panel. The exterior of the model has several access and equipment doors and two observation windows.  The top section, or nose, of the model holds the parachute landing system and radar.  There is a metal plaque on the base inscribed: "Christmas 1962/ Gemini Spacecraft (Scale 1/8)/ Made and Presented by/ The Personnel of McDonnell Aircraft/ To President John F. Kennedy/ In Appreciation of His Visit to the St. Louis Plant/ On 12 September 1962". The Gemini was the first American manned spacecraft to include an onboard computer, the Gemini Guidance Computer, to facilitate management and control of mission maneuvers. It was also unlike other NASA craft in that it used ejection seats, in-flight radar and an artificial horizon - devices borrowed from the aviation industry.

The Gemini program (1962-66) expanded the manned space flight program with the development of a two-man spacecraft, precision maneuvering in orbit, and missions that subjected astronauts to longer duration flights.