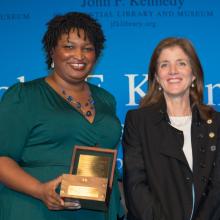 Stacey Abrams is the first woman to lead either party in the Georgia General Assembly, and the first African-American to lead in the Georgia House of Representatives. First elected in 2006, Abrams has made a mark as a thoughtful, open-minded legislator and a master of detail in the formulation of public policy. In 2010, Georgia House Democrats elected Abrams to lead their caucus. Abrams quickly earned a reputation - and respect - on both sides of the aisle for working across party lines on important legislation. She faced some resistance among Democratic caucus members for her policy of engagement with the Republican majority. However, her approach allowed her to "put her stamp on proposals that could easily have become law without any input from the minority party," as longtime Atlanta Journal-Constitution political columnist Jim Galloway wrote. In one instance, amid debate over funding reductions for a landmark statewide scholarship program, Abrams negotiated the restoration of a full-day pre-kindergarten program that had been a target for cuts.

In January 2012, Governing magazine named Abrams one of twelve state legislators to watch. Prior to her election to the Georgia House, Abrams was Deputy City Attorney for the city of Atlanta. Before that, she was a tax attorney at an Atlanta law firm, where she focused on tax-exempt organizations, health care and public finance.