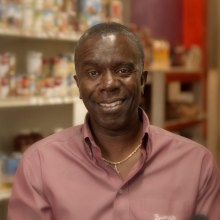 In 2014, Burnell Cotlon spent his life savings to open the only fresh grocery store in the Lower Ninth Ward of New Orleans. When the pandemic put many in his community out of work, Cotlon began allowing customers to take groceries on credit. Within a month, he’d opened tabs for more than 60 customers who could no longer afford to buy food. Cotlon, an Army veteran who lived in a FEMA trailer for three years after Hurricane Katrina, missed mortgage payments on his own house as his store quickly lost revenue, but he continued to offer lines of credit and even gave away food to customers.

"Burnell is a true friend and neighbor, and a boon to his community. His store acts as a common space, a touchstone for the Lower Ninth Ward, and a beacon to all who hope to create and sustain successful small businesses - both here and across the country. His is a true success story, and it is an honor to know him." - Laura Paul, Director of lowernine.org