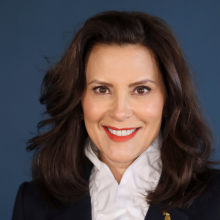 When Michigan's first cases of COVID-19 were identified in early March 2020, Governor Gretchen Whitmer invoked emergency powers in a bid to contain the spread of the virus and save lives, issuing early, controversial orders to close schools and businesses, mandate mask wearing, and ban large gatherings, among other measures.

While her leadership earned praise from many, she also faced sustained, vocal backlash over stay-at-home rules that remained in place as COVID-19 cases in Michigan continued to rise during the spring. Protests over Whitmer's pandemic response became increasingly threatening, with armed demonstrators surrounding and at one point storming the state capitol to demand an end to stay-at-home orders. In October, thirteen men were charged with a June 2020 plot to kidnap Whitmer. The men were said to be motivated at least in part by anger and resentment over pandemic restrictions. Despite violent threats against her life, Whitmer did not back down. She stayed focused on following the science and listening to public health experts to get the pandemic under control and start rebuilding Michigan's economy.

"John Dingell served with three generations of Kennedys in Congress, and he shared their admiration of public servants with political courage and moral conviction. In his decades in elected office, John always put the people he served first, and that’s exactly what Governor Whitmer has done at the helm of our state. She's led Michigan with guts, grace, and compassion, and we're lucky she’s fighting for us." - Debbie Dingell (D-MI 12th District)

"Governor Whitmer has been a steadfast partner in fighting this pandemic, and has put the health and safety of the people of Michigan first. She acted quickly, fighting from the outset for resources and testing for her state when they were scarce, and has stood strong in the face of enormous challenges to help save thousands of lives. She's been smart, she's been tough as nails, and she's done an incredible job steering her state through a turbulent time." - President Joseph R. Biden