Lieutenant John F. Kennedy's encounter with a Japanese destroyer on the night of August 1, 1943, may be the most famous small-craft engagement in naval history, and it was an unmitigated disaster.

At a later date, when asked to explain how he had come to be a hero, Kennedy replied laconically, "It was involuntary. They sank my boat."

In Blackett Strait, south of Kolombangara in the Solomon Islands, the starless, moonless night of August 1, 1943, was profoundly dark. Inky blackness like this could have a disorienting effect, even on experienced sailors.

PT-109 stood at her station, one of fifteen PT boats ("Patrol Torpedo" boats) that had set out to engage, damage, and maybe even turn back the well-known "Tokyo Express." US forces gave that name to the Japanese navy's more or less regular supply convoy to soldiers fighting the advance of US forces in the islands farther south.

When the patrol actually did come in contact with the Tokyo Express—three Japanese destroyers acting as transports with a fourth serving as escort—the encounter did not go well. Thirty torpedoes were fired without damaging the Japanese ships. No US vessels suffered hits or casualties. Boats that had used up their complement of torpedoes were ordered home. The few that still had torpedoes remained in the strait for another try. 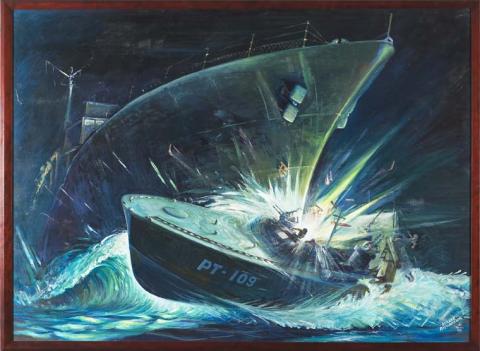 PT 109 was one of the boats left behind. Lieutenant Kennedy rendezvoused his boat with two others, PT 162 and PT 169. The three boats spread out to make a picket line across the strait. At about 2:30 in the morning, a shape loomed out of the darkness three hundred yards off PT 109's starboard bow. The young lieutenant and his crew first believed it to be another PT boat. When it became apparent that it was one of the Japanese destroyers, Kennedy attempted to turn to starboard to bring his torpedoes to bear. But there was not enough time.

The destroyer, later identified as the Amagiri, struck PT 109 just forward of the forward starboard torpedo tube, ripping away the starboard aft side of the boat. The impact tossed Kennedy around the cockpit. Most of the crew were knocked into the water. The one man below decks, engineer Patrick McMahon, miraculously escaped, although he was badly burned by exploding fuel.

Fear that PT 109 would go up in flames drove Kennedy to order the men who still remained on the wreck to abandon ship. But the destroyer's wake dispersed the burning fuel, and when the fire began to subside, Kennedy sent his men back to what was left of the boat. From the wreckage, Kennedy ordered the men with him, Edgar Mauer and John E. Maguire, to identify the locations of their crew mates still in the water. Leonard Thom, Gerard Zinser, George Ross, and Raymond Albert were able to swim back on their own.

Kennedy swam out to McMahon and Charles Harris. Kennedy towed the injured McMahon by a life-vest strap, and alternately cajoled and berated the exhausted Harris to get him through the difficult swim. Meanwhile, Thom pulled in William Johnston, who was debilitated by the gasoline he had accidentally swallowed and the heavy fumes that lay on the water. Finally Raymond Starkey swam in from where he had been flung by the shock. Floating on and around the hulk, the crew took stock. 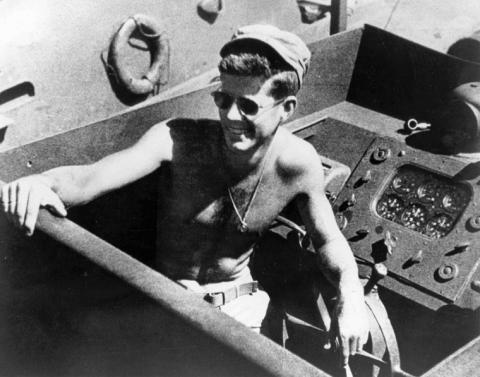 Harold Marney and Andrew Jackson Kirksey had disappeared in the collision, very likely killed at impact. All the men were exhausted, and a few were hurt, and several had been sickened by the fuel fumes. There was no sign of other boats or ships in the area; the men were afraid to fire their flare gun for fear of attracting the attention of the Japanese who were on islands on all sides. Although the wreckage was still afloat, it was taking on water, and it capsized on the morning of August 2.

After a discussion of options, the men abandoned the remains of PT 109 and struck out for an islet three and a half miles away.

Kennedy had been on the swim team at Harvard; even towing McMahon by a belt clamped in his teeth, he was undaunted by the distance. Some of the other men were also good swimmers, but several were not; two, Johnston and Mauer, could not swim at all. These last two were lashed to a plank that the other seven men pulled and pushed as they could.

Kennedy arrived first at the island. It was named Plum Pudding, but the men called it "Bird" Island because of the guano that coated the bushes. Exhausted, Kennedy had to be helped up the beach by the man he had towed. He collapsed and waited for the rest of the crew. But Kennedy's swimming was not over. 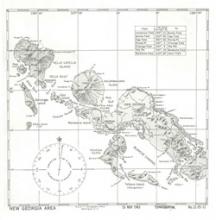 Alarmed by a Japanese barge that passed close by, Kennedy decided to swim down into Ferguson Passage, through which the American PT boats passed when they were operating in Blackett Strait. Island-hopping and clinging to reefs, Kennedy made his way out into the passage, where he treaded water for an hour before deciding that the PT boats were in action elsewhere that night.

The return voyage nearly killed him as strong currents spun him out into Blackett Strait and then back into Ferguson Passage. Making the weary trip again, Kennedy stopped on Leorava Island, southeast of Bird Island, where he slept long enough to recoup himself for the final leg of the trip. Returning to Bird Island, Kennedy slept through the day but also made Ross promise to go out on the same trip that night. But Ross, unfortunately, did not see any sign of the PT boats either.

Looking for a Way Home

On August 4, Kennedy led the men back into the ocean, striking out for Olasana Island in hopes of finding food and fresh water but also trying to get closer to Ferguson Passage. Kennedy again hauled McMahon by the strap of his life vest while the rest of the crew clustered around the plank and thrashed their way along.

Olasana Island proved to be something of a disappointment. The coconuts were more plentiful but had a sickening effect on some of the men. The men found no fresh water, and they were too nervous about Japanese patrols to explore more than a small corner of this larger island.

When the night of August 4 turned wet and cold, Kennedy determined to try the next island over the following day. Naru Island is the last in the chain, and its eastern shores look out over Ferguson Passage. Kennedy and Ross climbed up onto its beach a little past noon on August 5.

Fearing enemy patrols, the two men stepped carefully through the brush but only saw the wreck of a small Japanese vessel out on the reef. On the beach they spotted a small box with Japanese labels. When they broke it open, they were delighted to discover it contained Japanese candy. Even better, a little further up the island they discovered a tin of water and a one-man canoe hidden in the bushes.

After a drink, Kennedy and Ross were walking back onto the beach when they saw two men out at the Japanese wreck. The men, clearly islanders, took fright and paddled away from the wreck in a canoe, despite Kennedy's hails. That night Kennedy took the canoe into Ferguson Passage once more, again without spotting any US vessels.

Kennedy decided to take the canoe back to Olasana; he stopped long enough to gather the candy and the water to bring to the other men, leaving Ross to rest until the next morning. Arriving at Olasana, Kennedy discovered that the two men he and Ross had seen at Naru had made contact with the rest of the crew. The two men, Biuku Gasa and Eroni Kumana, were islander scouts for the Allies. Their hasty departure from Naru had left them tired and thirsty, and they had stopped for coconuts at Olasana, where Thom had been

The next morning, August 6, Kennedy returned with Gasa and Kumana to Naru, intercepting Ross along the way as he was swimming back. The islanders showed the two Americans where a boat had been hidden on Naru. Kennedy was at a loss for a way to send a message, but Gasa showed him how to scratch a few words into the husk of a green coconut. 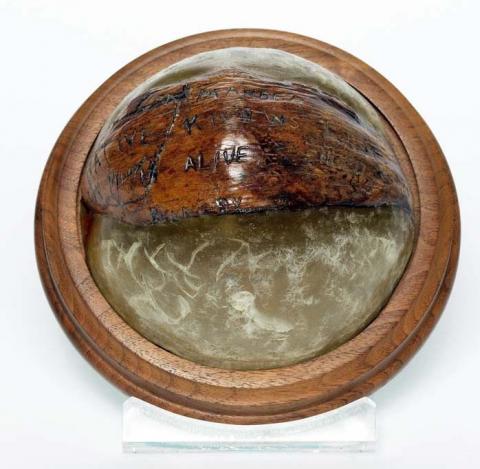 Gasa and Kumana left with the message—

As they waited for a rescue, Kennedy insisted on going out with Ross into Ferguson Passage in the two-man canoe. Heavy seas swamped the canoe and so battered the men that they barely made it back to Naru. But the next morning, August 7, eight islanders appeared at Naru shortly after Kennedy and Ross awoke. They brought food and instructions from the local Allied coastwatcher, Lt. A. Reginald Evans, who instructed Kennedy to come to Evans's post.

Stopping long enough at Olasana to feed the crew, the islanders hid Kennedy under a pile of palm fronds and paddled him to Gomu Island in Blackett Strait. Early in the evening of August 7, a little more than six days after PT-109's sinking, Kennedy stepped on to Gomu. There was still a rescue to be planned with Evans, no small thing in enemy-held waters, but the worst of the ordeal of PT 109 was over.

Evans already notified his commander of the discovery of PT-109's survivors, and the base commander proposed sending a rescue mission directly to Olasana. Kennedy insisted on being picked up first so that he could guide the rescue boats, PT 157 and  PT 171, among the reefs and shallows of the island chain.

Late on the night of August 7, the boats met Kennedy at the rendezvous point, exchanging a prearranged signal of four shots. Kennedy's revolver was down to only three rounds, so he borrowed a rifle from Evans for the fourth. Standing up in the canoe to give the signal, Kennedy did not anticipate the rifle's recoil, which threw him off balance and dumped him in the water. A soaking wet and thoroughly exasperated Navy lieutenant climbed aboard PT 157.

The PT boats crossed Blackett Strait under Kennedy's direction and eased up to Olasana Island early in the morning of August 8. The exhausted men of PT 109 were all asleep. Kennedy began yelling for them, much to the chagrin of his rescuers, who were nervous about the proximity of the Japanese. But the rescue went forward without incident, and the men of PT 109 reached the US base at Rendova at 5:30 a.m. on August 8.

The story was picked up by the writer John Hersey, who told it to the readers of The New Yorker and Reader's Digest. It followed Kennedy into politics and provided a strong foundation for his appeal as a leader. 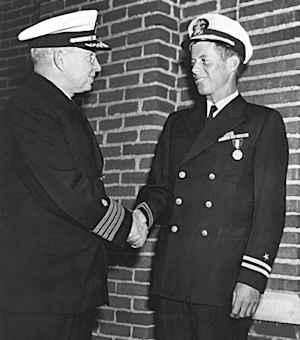