On August 5, 1963, after more than eight years of difficult negotiations, the United States, the United Kingdom, and the Soviet Union signed the Limited Nuclear Test Ban Treaty.

The destruction of Hiroshima and Nagasaki by atomic bombs marked the end of World War II and the beginning of the nuclear age. As tensions between East and West settled into a Cold War, scientists in the United States, Great Britain, and the Soviet Union conducted tests and developed more powerful nuclear weapons.

In 1959, radioactive deposits were found in wheat and milk in the northern United States. As scientists and the public gradually became aware of the dangers of radioactive fallout, they began to raise their voices against nuclear testing. Leaders and diplomats of several countries sought to address the issue.

Attempts to Negotiate a Treaty

In May 1955, the United Nations Disarmament Commission brought together the United States, the United Kingdom, Canada, France, and the Soviet Union to begin negotiations on ending nuclear weapons testing.

Conflict soon arose over inspections to verify underground testing. The Soviet Union feared that on-site inspections could lead to spying that might expose the Soviets' vastly exaggerated claims of the number of deliverable nuclear weapons. As negotiators struggled over differences, the Soviet Union and the United States suspended nuclear tests—a moratorium that lasted from November 1958 to September 1961.

John F. Kennedy had supported a ban on nuclear weapons testing since 1956. He believed a ban would prevent other countries from obtaining nuclear weapons, and took a strong stand on the issue in the 1960 presidential campaign. Once elected, President Kennedy pledged not to resume testing in the air and promised to pursue all diplomatic efforts for a test ban treaty before resuming underground testing. He envisioned the test ban as a first step to nuclear disarmament. 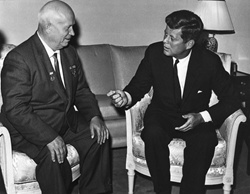 President Kennedy met with Soviet Premier Khrushchev in Vienna in June 1961, just five weeks after the humiliating defeat of the US-sponsored invasion of Cuba at the Bay of Pigs. Khrushchev took a hard line at the summit. He announced his intention to cut off Western access to Berlin and threatened war if the United States or its allies tried to stop him. Many US diplomats felt that Kennedy had not stood up to the Soviet premier at the summit and left Khrushchev with the impression that he was a weak leader.

President Kennedy's political and military advisors feared that the Soviet Union had continued secret underground testing and made gains in nuclear technology. They pressured Kennedy to resume testing. And, according to a Gallup poll in July 1961, the public approved of testing by a margin of two-to-one. In August 1961, the Soviet Union announced its intention to resume atmospheric testing, and over the next three months it conducted 31 nuclear tests. It exploded the largest nuclear bomb in history—58 megatons—4,000 times more powerful than the bomb dropped on Hiroshima.

Discouraged and dismayed by the Soviet tests, President Kennedy pursued diplomatic efforts before allowing renewed testing by the United States. In his address to the United Nations on September 25, 1961, he challenged the Soviet Union "not to an arms race, but to a peace race." President Kennedy was unsuccessful in his efforts to reach a diplomatic agreement and reluctantly announced the resumption of atmospheric testing. American testing resumed on April 25, 1962.

Lessons from the Cuban Missile Crisis

After the Cuban Missile Crisis in October 1962, President Kennedy and Premier Khrushchev realized that they had come dangerously close to nuclear war. Both leaders sought to reduce tensions between their two nations.

As Khrushchev described it, "The two most powerful nations had been squared off against each other, each with its finger on the button." JFK shared this concern, once remarking at a White House meeting, "It is insane that two men, sitting on opposite sides of the world, should be able to decide to bring an end to civilization." In a series of private letters, Khrushchev and Kennedy reopened a dialogue on banning nuclear testing.

In his commencement address at American University on June 10, 1963, Kennedy announced a new round of high-level arms negotiations with the Russians. He boldly called for an end to the Cold War. "If we cannot end our differences," he said, "at least we can help make the world a safe place for diversity." The Soviet government broadcast a translation of the entire speech, and allowed it to be reprinted in the controlled Soviet press.

President Kennedy selected Averell Harriman, an experienced diplomat known and respected by Khrushchev, to resume negotiations in Moscow. An agreement to limit the scope of the test ban paved the way for a treaty. By excluding underground tests from the pact, negotiators eliminated the need for the on-site inspections that worried the Kremlin.

On July 25, 1963, after only 12 days of negotiations, the two nations agreed to ban testing in the atmosphere, in space, and underwater. The next day, in a television address announcing the agreement, Kennedy claimed that a limited test ban" is safer by far for the United States than an unlimited nuclear arms race."

The Limited Nuclear Test Ban treaty was signed in Moscow on August 5, 1963, by US Secretary Dean Rusk, Soviet Foreign Minister Andrei Gromyko, and British Foreign Secretary Lord Home—one day short of the 18th anniversary of the dropping of an atomic bomb on Hiroshima.

Over the next two months, President Kennedy convinced a fearful public and a divided Senate to support the treaty. The Senate approved the treaty on September 23, 1963, by an 80-19 margin. Kennedy signed the ratified treaty on October 7, 1963.

Thirty-three years later, the United Nations General Assembly adopted the Comprehensive Nuclear Test Ban Treaty. Signed by 71 nations, including those possessing nuclear weapons, the treaty prohibited all nuclear test explosions including those conducted underground. Though it was signed by President Bill Clinton, the Senate rejected the treaty by a vote of 51 to 48.