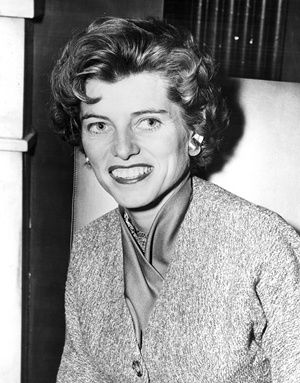 Eunice Kennedy was born in Brookline, Massachusetts, on July 10, 1921, the fifth of Rose and Joseph Kennedy’s nine children and their third daughter. She attended the Convent of the Sacred Heart School in Noroton, Connecticut, and Manhattanville College, and received a B.S. degree in sociology from Stanford University in 1943.

Following graduation, she served in the Special War Problems Division of the Department of State, and then headed a juvenile delinquency project in the Department of Justice. In 1950, she became a social worker at the Penitentiary for Women in Alderson, West Virginia, and the following year she moved to Chicago, Illinois to work with the House of the Good Shepherd and the Chicago Juvenile Court.

In 1953, she married Robert Sargent Shriver Jr., a graduate of Yale University and Yale Law School and former Navy officer who had joined her father's firm in Chicago, the Merchandise Mart, in 1948. The Shrivers had five children: Robert III, Maria, Timothy, Mark, and Anthony.

In 1957, Mrs. Shriver took over the direction of the Joseph P. Kennedy Jr. Foundation, established in 1946 as a memorial to her oldest brother, who had been killed in World War II. The Foundation’s goals were to help prevent intellectual disabilities by identifying their causes, and to improve the means by which society deals with people who have intellectual disabilities. Under Mrs. Shriver's leadership, the Foundation helped achieve many significant advances.

In June 1962, Mrs. Shriver began a summer day camp for children and adults with intellectual disabilities at her home in Maryland to explore their capabilities in a variety of sports and physical activities. From that camp came the concept of Special Olympics, an organization dedicated to empowering people with intellectual disabilities to realize their full potential and develop their skills through year-round training in sports and competition.

In 1968, working with the Chicago Park District, the Joseph P. Kennedy Jr. Foundation planned and underwrote the First International Special Olympics Summer Games, held in Chicago's Soldier Field, where 1,000 athletes with intellectual disabilities from 26 states and Canada competed in athletics. In December 1968, Special Olympics, Inc. was established as a non-profit charitable organization under the laws of the District of Columbia. The Arc of the United States, the Council for Exceptional Children, and the American Association on Mental Deficiency pledged their support for this first systematic effort to provide training and competition in sports for individuals with intellectual disabilities based on the Olympic tradition and spirit. Today, more than 1.3 million children and adults with intellectual disabilities participate in Special Olympics, which is active in more than 150 countries around the world.

Up until the time of her passing, Mrs. Shriver continued to be a member of the Special Olympics Board of Directors and continued to work to improve the lives of people with intellectual disabilities, but was no longer involved in the day-to-day management of Special Olympics.

Mrs. Shriver was recognized throughout the world for her work, and received numerous honors and awards, including: the Presidential Medal of Freedom, the Legion of Honor, the Prix de la Couronne Francaise, the Mary Lasker Award, the Philip Murray-William Green Award (presented to Eunice and Sargent Shriver by the AFL-CIO), the Association of Art Museum Directors Humanitarian Award, the National Recreation and Park Association National Volunteer Service Award, the Laetare Medal of the University of Notre Dame and the Order of the Smile of Polish Children.

Mrs. Shriver received the 2002 Theodore Roosevelt Award of the National Collegiate Athletic Association, the highest honor bestowed on individuals by the Association.

In 1984, when President Ronald Reagan awarded Mrs. Shriver the Presidential Medal of Freedom, the nation's highest civilian honor, for her work on behalf of persons with intellectual disabilities, he said: "Her decency and goodness have touched the lives of many, and Eunice Kennedy Shriver deserves America's praise, gratitude and love."

Watch this event with audio description.