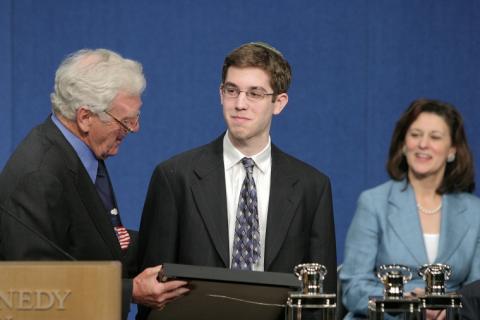 Bernard Confer: Courage Within His Community

For many Americans, cynicism dictates their opinion of higher elected officials. The president, congressmen, governors, and mayors are all viewed to some degree as “politicians” who value their offices and the approval of their constituents over principles. However, members of smaller elected bodies, like a Board of Education, appear to be more committed to the ideal of civil service and less politically ambitious. Nonetheless, taking a principled stand can be even more difficult with one’s neighbors as constituents whose children’s educations are directly affected by the Board’s decisions. Bernard Confer, the president of Teaneck, New Jersey Board of Education, faced overwhelming public opinion in leading the Board in its decision to integrate Teaneck’s schools in 1964, making it the first “white” town in the nation to voluntarily do so.

During the 1950s and 1960s, middle class blacks had begun to move to Teaneck, predominately in the northeast section of town. Blockbusting and other scare tactics used by realtors caused a white exodus from those neighborhoods as more blacks moved in. Teaneck had a neighborhood school system in which students were assigned to schools based on where in town they lived, and Bryant Elementary School, which served the northeast section of town, was fast approaching a black majority in the early 1960s.  Black parents feared that this de facto segregation would lead to Bryant being stigmatized as a “Negro school,” accelerating the withdrawal of whites as well as causing high teacher turnover and reduced funding (Damerell, p. 158). The Board had passed measures allowing parents to voluntarily transfer their children to other schools without much success in altering the school’s racial makeup.  At the superintendent’s urging, the Board publicized three solutions that were being considered, including a plan to make Bryant a central sixth grade and bus the students from Bryant’s district in grades 1-5 to the other elementary schools. This proposal would prevent de facto segregation at Bryant and integrate every elementary school in Teaneck.  Countless parents were infuriated by the proposed plans and formed the Neighborhood School Association (NSA), denying that Teaneck had a problem of racial imbalance in its schools. This group would later put up a slate of candidates for the Board of Education in the 1964 election.

Teaneck’s Board of Education has nine trustees who are elected for staggered three-year terms with three seats on the Board elected each year.  Confer was the only trustee running for reelection; although he was in favor of integration, he avoided the issue, instead preferring to campaign on the abstraction of “quality education” (Damerell, p. 210). Confer came in third, winning reelection by only twenty-one votes.  He owed his victory to the third member of the NSA slate’s support for the schools’ budget, which lost her the endorsement of the Lower Taxes League.  Following the election, the Board chose Confer as its president. Overwhelming electoral support for the NSA slate had made clear that they could gain control of the Board the next year and that if an integration plan were to be passed, it would have to be done soon.

On May 13, 1964, the Board of Education held a public meeting at the high school. Fourteen hundred residents were jammed into the auditorium, most of them hostile to the central sixth grade integration plan. Although the NSA trustees had claimed that racial imbalance was nonexistent, declared a majority of Teaneck to be against compulsory busing for sixth graders, and threatened civil disobedience should the integration plan pass, the Board had informally passed the measure the previous night. Before the meeting began, Confer rose from his seat and offered encouragement to six other trustees who, with him, composed the majority. The NSA presented a petition with over five thousand signatures against the central sixth-grade plan. Dr. Harry Warner, an NSA trustee called it “the climax of a miscarriage of the democratic process that has been perpetuated on this tortured community these past many months” (Damerell, p.256).  Before a vote on the motion that Bryant become a sixth grade school, Confer rose from his seat and faced the belligerent crowd.  He read a prepared statement that said, “I personally have been disturbed that a number of people refuse to recognize a more issue in this situation…We have been a party to a history of discrimination against the Negro in housing…I say there is a moral issue and I challenge every citizen to admit it” (Damerell, p. 257). Then, he called for a vote in which the proposal passed 7-2. Following the vote, members of the enraged crowd jumped to their feet, some running towards the board members on stage.  It took several policemen and a fireman to restore order.  In the following weeks and months, Bernard Confer received threatening and profanity-laced phone calls. There was even one instance in which Confer’s six-year-old daughter picked up the phone and the caller yelled obscenities at her instead. Confer’s home required police protection.

The test as to whether integration would be in Teaneck to stay was the Board of Education elections in February 1965. If the NSA won, as it seemed they would, it would be not long before they reversed the integration decision, leaving the issue up to the courts to impose on Teaneck. The pro-integration slate, called the “Good Guys,” needed every vote to defeat the popular NSA and thus initiated a massive get out the vote effort to ensure their supporters would not stay home.  Once the central sixth grade became a fact on the ground, citizens of Teaneck had realized that it was not as bad as the NSA had predicted it would be. All three “Good Guys” won by almost 2,000 votes. A record 12,820 people cast votes in what The New York Times called “the bitterest school [fight] in the history of Bergen County” (Waggoner). Although Confer did not run for reelection two years later, he showed incredible courage by alienating his neighbors and enduring verbal abuse as well as the threat of physical harm to stand up for his principles.