2004 Winning Essay by Will Schmidley 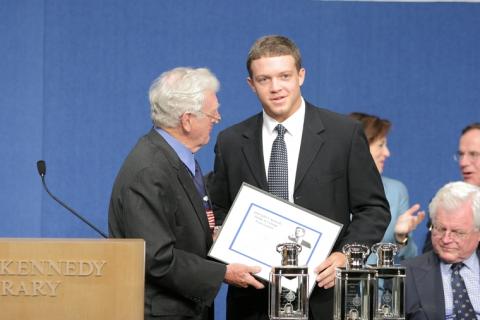 On January 30, 2000, Governor George Ryan imposed this country’s first death penalty moratorium in Illinois. Governor Ryan’s transformation from staunch proponent to outspoken opponent of capital punishment has placed the fairness of the death penalty at the forefront of our national consciousness. Governor Ryan’s decisions to impose a moratorium on executions and then to issue a blanket commutation of sentence for all of Illinois’ death row inmates were seminal ones by an elected official. These historic actions were fueled by Ryan’s grave personal misgivings about the reliability of the capital punishment system in Illinois.

Governor Ryan’s journey from death penalty advocate to death penalty reform activist, although first and foremost a personal one, unfolded on the highly public stage of Illinois politics. Ryan and his family were pharmacists in Kankakee, Illinois. He was elected to the legislature as a steadfast law and order supporter: “I believed some crimes were so heinous that the only proper way of protecting society was execution.  I saw a nation in the grip of increasing crime…the death penalty—that was good government” (Shapiro 2). During a 1977 debate on capital punishment, a House member inquired who among his colleagues would be willing “to throw the switch.” On that day, Ryan declared his “unequivocal support” for execution (Shapiro 3). Personal experience contributed to Ryan’s views at that time: His friend, Steve Small, died after being buried alive following abduction from his own driveway.

In 1998, Ryan was elected Illinois’ 39th governor on a law and order ticket. A compelling story of death row exoneration unfolded during his first months as governor.  Anthony Porter was 48 hours away from execution when a court of last resort granted a stay. The investigative efforts of a group of Northwestern journalism students on behalf of Porter made international headlines (“Rescue”). Among new evidence, these students obtained a videotaped confession by the real killer. In February 1999, Porter became Illinois’ tenth exonerated death row prisoner.  This stunning reversal of fortune for the mentally disabled Porter left Ryan profoundly shaken. When, two weeks later, Illinois exonerated its eleventh death row prisoner Governor Ryan began to question his fundamental belief that “the ultimate penalty for taking a life was administered in a just and fair manner” (Ryan 4). In March 1999, Ryan’s gubernatorial duties forced him to confront the death penalty in his decision to execute Andrew Kokoraelis (“Clemency”). After an examination of his conscience and the incontrovertible facts, the Governor approved this execution. However, within months of this decision, Illinois exonerated its twelfth and thirteenth death row inmates (“Clemency”). The state had now exonerated more prisoners than it had executed since 1977.

In 1999, the Chicago Tribune published disturbing findings on the causes of “fundamental error” in Illinois’ capital punishment cases (Mills and Armstrong.1). Coming to the bitter realization that the application of capital punishment in Illinois was plagued by the peril of horrific error, Ryan took the unprecedented step of declaring a moratorium on executions in Illinois; a moratorium that remains in effect today. Thereafter, he created a Commission on Capital Punishment to recommend reforms of the state’s capital punishment system. When the pace and scope of proposed legislation implementing the Commission’s recommendations fell short, Ryan, compelled by unwavering moral conviction, began to ponder a blanket commutation of death sentences in Illinois. Although not required to do so, Governor Ryan held individual commutation hearings to allow victims and inmates the opportunity to express their feelings, “Everyone in those hearings who wanted to speak, had the opportunity to do so. Some wanted to express their grief while others wanted to express their anger” (Ryan 4). On January 10, 2003, Governor Ryan announced pardons of four death row prisoners who had confessed to murder after well-documented police brutality, bringing the number of exonerations in Illinois to seventeen. Four days later, the Governor took another historic step – commuting the sentences of all 167 prisoners remaining on death row, including the sentence of the man who murdered Steve Small (Flock). Because any legislation enacted to reform Illinois’ irretrievably flawed capital punishment system would not be retroactive, commutation of sentence was the only remedy for those who had been condemned under the unjust Illinois system.

Ryan’s courageous decisions heightened awareness that the systematic failures in criminal justice procedures are not unique to Illinois. Since the Illinois moratorium, a number of states have ordered detailed studies of their capital punishment systems or have implemented their own moratoria (“Report of the Commission on Capital Punishment” 15). Senator Patrick Leahy, in announcing approval of the Advancing Justice Through DNA Technology Act of 2003, credited Ryan’s “courage in calling for a moratorium on the use of the death penalty in the state of Illinois until failures in the system could be identified and corrected” (Leahy Release).

Ryan’s motives have been harshly scrutinized be his detractors, many of whom claim that the Governor’s death penalty stance was only a crude attempt to deflect attention from a political scandal (Dunphy 2). Knowing that he and many around him were the targets of investigations and probes, he could have adopted a lower profile and not risked exposing the prosecutorial malfeasance that had contributed to the irretrievable breakdown of the capital punishment system.  After all, Ryan had spent decades working within the system of government he was now attacking. He could have made token gestures, but instead he acted boldly, courageously. Ryan’s sincere conviction, born out of a personal journey that resulted in his change of heart, is reflected in his own words announcing the blanket commutations, “I know that any decision that I’ll make today will not be accepted by one side or the other. I may never be comfortable with the decision that I make…but I’ll know in my heart that I did my very best to do the right thing” (Ryan 5). These plain spoken sentiments are not those of a politician, but rather those of a man who saw grievous flaws in a system of punishment and had the courage to use the bully pulpit of his office to do what no one else had ever done for a group of people most are only too glad to abandon.