Profile In Courage: Senator Hatfield and the Defeat of the Balanced Budget Amendment 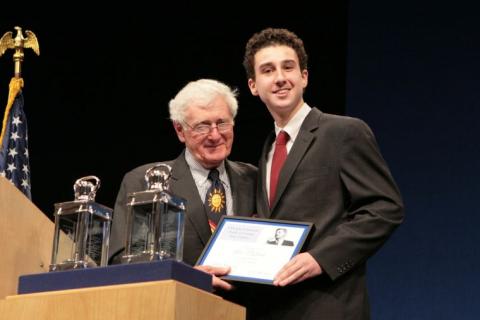 In 1995, Mark Hatfield, Senator from Oregon, cast the decisive vote against the Balanced Budget Amendment to the United States Constitution. Had the amendment passed, the federal government’s power to use deficit spending would have come to an end. Any program that relies on discretionary spending—from Social Security to Head Start—would have faced unpredictable cuts, causing untold suffering to the poor, the aged, and the young. The amendment—the “number one priority” of the  new  Republican majority in Washington, D.C., the first since President Eisenhower’s administration in 1953—was a hairsbreadth away from the required two-thirds vote in the Senate.1 Despite the call for party unity, Senator Hatfield would not say yes, refusing even to abstain. “I cannot in good conscience,” Hatfield stated, “vote for the amendment [and] forever alter the way our Constitution is interpreted.”2 The only Republican to break with party, Hatfield voted on principle, risking, as John F. Kennedy would put it, “his own career—for the national good.”3

The importance of the Balanced Budget Amendment to party politics highlights Senator Hatfield’s courage. As the “centerpiece” of the Republican agenda in the 1990s4—the Contract with America—the amendment responded to concerns that the federal government was spiraling out of control. Putting a brake on deficit spending, the amendment would have imposed debt limits on the federal government to halt discretionary expenditures. Although fiscal restraint may be a virtue, the amendment raised serious questions about democracy and economics. Robert Reischauer, former director of the Congressional Budget Office, warned that such an amendment “could  lead to distortions of policies simply to meet budget goals”5 for it would compel legislators to cut funding for social programs just when the economy was weakest—at  the time of greatest need.  Moreover, the amendment could trigger government default  by increasing the cost of borrowing. But the Republican leadership, calling the proposal “absolutely essential,” made amending the Constitution its major goal.6

The Republicans controlled Congress, but held only 53 seats in the Senate. Every vote mattered. Senator Hatfield, however, opposed “enshrining fiscal policy in the constitution.”7 Indeed, he dismissed the amendment as “a political ploy to erroneously make Americans think [the government was] actually doing something about the deficit.”8 But on all sides he faced pressure to change his mind. Hatfield’s “colleagues leaned on him, lobbyists pressured him.””9 Senators Dole and Hatch,  Hatfield’s  longtime friends, urged party loyalty.10 The fact that Dole was a candidate for President heightened the importance of his request. In addition, the Republican leadership dispatched Dr. Robert Schuler, “the well-known television minister,” to persuade the Senator on grounds of faith.11 Even Hatfield’s son-in-law, counsel to Senator Hatch, lobbied him, presenting him with a photograph of his own granddaughter with the words “For Her Sake!” written on it.12

The amendment easily passed in the House of Representatives, 300-132, but its chances in the Senate were far from clear. The Republican leadership, hopeful that Hatfield would fall in line, postponed the day of the Senate roll call to give him time to come on board. In the final hours, Hatfield received almost a dozen phone calls urging party support. Senator Dole personally met with him for twenty minutes.13 So strongly did the Senator oppose the amendment that he offered to resign rather than vote in its favor.14 Although eleven Democrats joined with 55 Republicans, the amendment’s passage fell short—Senator Hatfield voted no, with a final tally of 65-35 (in Senate tradition, the Senate majority leader changed his vote once the measure failed to be able to bring it up for reconsideration).15

In Profiles in Courage, JFK observed: “In no other occupation but politics, is it expected that a man will sacrifice honors, prestige and his chosen career on a single issue.”16 Immediately, Republican colleagues called for Hatfield to resign as Chief of the Senate Appropriations Committee—a position of extraordinary importance.17 Senator Trent Lott called Hatfield “arrogant”; 18 others dubbed him “a poor excuse for a Republican.”19 Alphonse D’Amato, former senator from New York, urged the GOP to withhold campaign funds from Hatfield.20 But in the wake of his decision, Senator Hatfield showed “grace under pressure,”21 remaining respectfully silent against his critics even as a special caucus convened to discuss his fate. In the end, the Senator retained his chairmanship. But the next year he chose not to run for another term.

In opposing the amendment, Hatfield displayed the special political courage that JFK described: as a “conscientious insurgent,”22 Hatfield confronted not only “the pressures of party responsibility,” but also pressures from his longtime political friends, his faith, and his family.23 His stand against the Balanced Budget Amendment came at  the end of a long political career in which he showed himself to be no stranger either to controversy or to principle. He opposed the war in Vietnam. He urged amnesty for those who refused to fight in the war. He called for a nuclear freeze.24 His vote against the amendment may seem less heroic for the issue of a budget cap appears technical and legalistic. But the amendment would have radically altered the way government does business—the federal government would not have had financial discretion to deal with tragedies such as Hurricane Katrina or the threat of avian flu. Moreover, as the “rallying cry of the Republican Revolution,”25 the amendment demanded party loyalty in terms  that few elected officials could have resisted.

On the news of the Senator’s retirement, Senator Dodd singled out Hatfield’s stand against the Balanced Budget Amendment as one of the Senator’s exemplary acts of principle: he “was the sole Republican to vote against the . . . amendment, and he would have paid dearly for that stand had the concept of respect for one’s conscience not prevailed.”26 The concept of respect that did prevail owes much to Senator Hatfield’s political courage and the standard of decency he set for the nation.

2 Quoted in Timothy J. Lynch, “Getting the Vote Out:” A Comparative Study of Roll Call Discipline in the United States Congress and British House of Commons 5 (1996), www2.bc.edu/~lynchtq/congress.html (site last visited 12/26/05).

Articles and Other Materials

Lynch, Timothy J. “’Getting the Vote Out:’ A Comparative Study of Roll Call Discipline in the United States Congress and British House of Commons.” (1996), www2.bc.edu/~lynchtq/congress.html (site last visited 12/26/05).