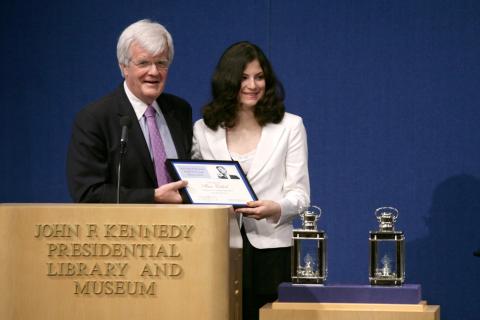 On January 29th of 1969, Shirley Chisholm walked up to the well on the floor of the House of Representatives and began to speak. “ …I think it would be hard to imagine an assignment that is less relevant to my background or to the needs of the predominantly black and Puerto Rican people who elected me, many of whom are unemployed, hungry, and badly housed, than the one I was given” (Chisholm, 1970, p.84). The freshman congresswoman from Bedford-Stuyvesant had been assigned to the Agriculture Committee, on the subcommittee for rural development and forestry.

Chisholm’s reaction was “Apparently all they know about Brooklyn here in Washington is that a tree grew there” (Madden, 1969). By audaciously challenging her committee assignment, Chisholm risked her future success in Congress to fight for her convictions and for her constituents.

In the 1960's, Bedford-Stuyvesant was largely composed of blacks and other minorities. It was one of the poorest, most dangerous, and least policed districts in New York. The New York Times reported on a Justice Department study of the narcotics and gambling industry in the district. It revealed that “organized crime was grossing more revenue….in Bedford-Stuyvesant than the Federal Government was collecting in income taxes from the area” (Burnham, 1972). Chisholm ran for Congress intent on improving these miserable conditions.

When Chisholm arrived in Washington in 1968, the House was a place for the powerful to gain more power and the freshmen to watch and learn. Power was gained by cultivating relationships with other representatives and obtaining positions on important “money” committees. The leadership had enormous influence on committee assignments and overall influence of a legislator. The future of a congressman in the House and in politics depended on one’s ability to please the leadership. So congressmen, particularly freshmen, rarely objected to their committee assignments. From 1925 to 1959, only two ever raised the issue. (Goodwin, 1959)

The seniority system began as a way to fight the establishment, but instead became an integral part of it. In 1911, a group of congressmen revolted against the powerful Speaker of the House, Joseph Cannon. They took away his right to appoint committee chairs and members and established the seniority rule as a safeguard against the Speaker’s total authority. However, this safeguard created its own problems. George Goodwin (1959) noted in his paper on seniority that there is a “lack of any dependable relation between seniority and qualified leadership” (p.418).

Shirley Chisholm realized that to make desperately needed changes for her constituents, she had to challenge the seniority system and work on a committee relevant to her district’s issues. Chisholm learned that she had been assigned to the Agriculture Committee. She was further assigned to the subcommittee on rural development and forestry, which could have no conceivable impact on her district. So Chisholm objected. She first spoke with the Speaker, John McCormack, who asked the chairmen of the Ways and Means and the Agriculture Committees for a change of subcommittee. Her request was rebuffed. McCormack told her “Mrs. Chisholm, this is the way it is…You have to be a good soldier.” Chisholm responded “All my forty-three years I have been a good soldier…The time is growing late, and I can’t be a good soldier any longer” (Chisholm, 1970, p. 82-83). Next, Chisholm attempted to make a motion on the floor to reconsider her assignment. “Every time I rose, two or three men jumped up” (ibid, p. 83). The seniority system foiled her once again, as senior members are always recognized first.

The Congresswoman persevered. She walked to the front of the room and began to speak. She exposed the discrepancy between the black population and black representation in Congress; only nine black members were in place, when over fifty should have been. Chisholm told the House that these nine members should be “where they can work effectively to help this nation meet its critical problems of racism, deprivation, and urban decay” (Madden, 1969). She then presented a resolution instructing the Committee on Committees to find a new committee assignment more pertinent to her district and experience. The amendment eventually passed and Chisholm was placed on the Veterans’ Affairs Committee. Risking the respect of her colleagues and her future in Congress, Shirley Chisholm had challenged the seniority system and won.

Shirley Chisholm continued to serve her district faithfully. She spoke out against the Vietnam War, against the draft, on behalf of the ERA, and in favor of legalizing abortion. She became honorary president of NARAL, taking a stand on a contentious issue. She pushed for a national holiday honoring Martin Luther King Jr. in every legislative session until it passed in 1983. She sponsored bills to halt the importation of Rhodesian Chrome, to help Cuban and Haitian refugees, to consider child nutrition in schools, and to aid Indian families. She used her experience as a teacher to back more funding for schools and daycare.

In 1972, Chisholm made a bid for the Democratic nomination for president. She defied the Black Caucus, who attempted to abort her run. She risked her dignity and even her life, surviving assassination attempts and personal attacks to allow future minority candidates to have an opportunity. “The door is not open yet, but it is ajar” (Chisholm, 1973, p.4).

When Shirley Chisholm decided to question the system, she did it with reason.

She requested a change in the seniority system so she could have a positive impact on the district she represented. She challenged the idea that representatives can only help their district with pork barrel politics, and insisted on making concrete changes to help the underprivileged. She risked the esteem and popularity that comes with quietly following tradition and, like John Quincy Adams, “neither sought nor was offered political alliances or influence” (Kennedy, 1956, p.39). Shirley Chisholm boldly protested a flawed system and risked her political future for what she believed was right.

"Thomas." The Library of Congress. Retrieved December 27 2006 from