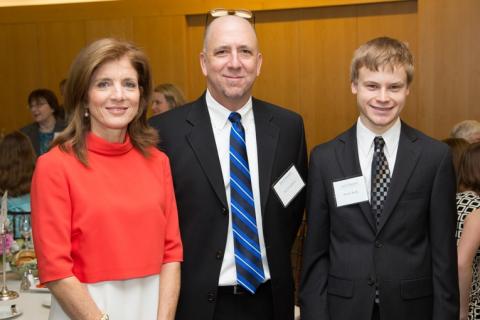 Beside the Christina River in downtown Wilmington stands a bronze statue of Delaware’s former governor Russell Peterson, looking resolutely over a park named in his honor. What could Peterson, a one-term governor of America’s second-smallest state, possibly have accomplished to deserve this monument? Nothing less than enacting perhaps our nation’s most underappreciated conservation law, the 1971 Coastal Zone Act, which has saved Delaware from the industrial blight that plagues other points on America’s East Coast (Kristl 37-8). As he battled to pass this law, Peterson, in the words of President Kennedy, “showed the real meaning of courage and a real faith in democracy” (18).

When Peterson took office in 1969, Delaware’s coastline and namesake Bay were being targeted for overwhelming industrial development. For several years, Shell Oil had been quietly preparing to build a $200 million refinery adjacent to Bombay Hook National Wildlife Refuge (“Delaware Bars Heavy Industry From Coastline”; Smith 3). Meanwhile, Zapata-Norness Inc., a shipping firm founded by George H.W. Bush, was planning to construct a 300-acre island in Delaware’s territorial waters on which to store mountains of coal and iron ore (Smith 3). Still another group, a consortium of oil companies, envisioned a massive offshore supertanker terminal (Peterson, Rebel 133). The Nixon administration eagerly supported these facilities, which promised to establish Delaware as a global industrial center—with the unfortunate side effect of devastating the state’s coastal environment (Williams 213-214).

Many governors would have welcomed such sweeping development, including one of Peterson’s predecessors, Caleb Boggs, who in the 1950’s had overseen construction of a heavily polluting refinery at Delaware City (“Delaware Governors”; Williams 191). Industrial leaders believed that Peterson, a Republican and former DuPont executive, would surely support further industrialization (Williams 214). Yet Kennedy’s belief that a politician “must judge…which step will most help or hinder the ideals to which he is committed” (11) rang true for Peterson, who, through his family pastime of birding, had “come to see what a good thing we had in southern Delaware—a relatively unspoiled paradise” (Peterson, Rebel 125). This appreciation for nature led Peterson to conclude, despite Boggs’ strong precedent and his own corporate past, that rampant industrialization was not in Delaware’s best interests. Rather than accept this trend as inevitable, however, he began crafting a plan for the coast’s protection (Peterson, Rebel 128-9).

In January 1971, upon this plan’s completion, Peterson boldly addressed the General Assembly, vowed that he would not allow industrial development “if the price is disfigurement and pollution of our environment”(qtd. in Williams 214), and called for passage of a Coastal Zone Act (CZA). This bill took the nationally unprecedented step of declaring Delaware’s coastline and waters forever off-limits to new heavy industrial development (Kristl 4; Coastal Zone Act). Not surprisingly, it soon drew the ire of what Kennedy termed, “the articulate few whose views cannot be ignored” (10).

Peterson courageously defied this opposition as he steered the bill through the legislative process. His first test came within weeks of announcing his intentions, when the State Chamber of Commerce, representing all of Delaware’s major corporations, voted unanimously to oppose Peterson’s vision, accusing him of “extreme discrimination” against heavy industry (qtd. in Peterson, Rebel 134). Peterson could have ended this animosity by withdrawing his support for the CZA, yet he explained to the Chamber’s President that doing so “would be discrimination against the people of Delaware. I have been elected to represent their interests to the best of my abilities” (Peterson, Rebel 134). This devotion to his constituents echoed that of Senator George Norris in Profiles in Courage, who explained that he took deeply unpopular positions, “to do what in my heart I believed to be right for the people at large” (qtd. in Kennedy 182).

Peterson mirrored Norris’ tenacity throughout the spring of 1971 as he shielded the CZA from a broad array of attacks. The Governor refused to be swayed when construction workers who had anticipated employment by the oil companies picketed outside his home, or when the president of Shell personally visited him in an attempt to soften his stance (Peterson, Rebel 136- 8). Secretary of Commerce Maurice Stans took a much harder line when he summoned Peterson to Washington, looked the Governor straight in the eye, and said, “We think you are being disloyal to our country.” A lesser man would have crumbled under such a harsh rebuke, but Peterson simply replied, “Hell, no. I am being loyal to future generations of Americans” (qtd. in Peterson, Rebel 145).

Thanks to this resolve, the bill never deviated from its strict ban on all forms of heavy industry on Delaware’s coastline, despite oil companies’ vicious attempts to weaken the bill or block it altogether (Williams 216). Finally, late on the nights of June 21st and 22nd, the CZA was narrowly passed by the state legislature and triumphantly signed into law by Governor Peterson (Peterson, “History”). A New York Times editorial underscored this achievement’s significance:

It is almost inconceivable that ten, even five years ago the Governor and legislature of any state would have barred heavy industry from its coastal lands…forty-nine other states, including New York, can learn something from the exceptionally perceptive action of Governor Peterson (“Delaware Shows the Way”).

This sentiment reverberated across America as New York, California, Massachusetts, and several other states enacted conservation measures inspired by the CZA, preserving countless acres in their natural beauty (Peterson, Rebel 177-78).

After sparking this trend of conservation, Peterson made yet another “perceptive action,” one which proved to be his undoing. Mere hours after signing the CZA, Peterson candidly informed the state legislature that tax hikes would be necessary to rescue Delaware’s finances. This straightforward act crippled Peterson’s bid for re-election, ending his political career (Cohen). Yet Peterson’s defeat was far outweighed by the national legacy of his Coastal Zone Act, which confirms Kennedy’s belief that the work of courageous politicians “has reached the homes and enriched the heritage of every citizen in every part of the land” (Kennedy 19).

Nowhere is this legacy more apparent than in Delaware itself. Where there could have been miles of pipelines, supertanker ports, and an ever-present risk of catastrophic spills, the CZA ensured that there are instead clean waters, pristine wetlands, and excellent beaches that continue to support lucrative fishing and tourism industries (Kristl 103). Peterson best summarized the rewards of his courageous action when he reflected, nearly four decades after the law’s signing, that, “Our choice was to cherish or destroy. We decided to cherish” (Peterson, “History”).