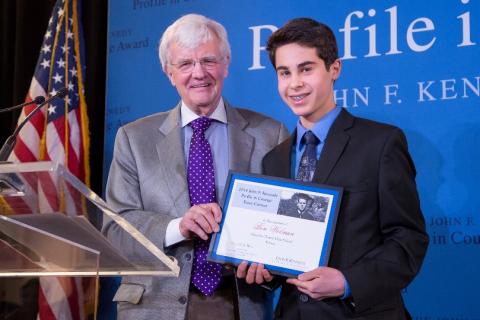 Colorado State Senate President John Morse was not your typical arm’s-length, politically calculating legislator when it came to the issue of gun control. As an ex- policeman and paramedic, a man who personally had dealt with armed criminals, been shot at, and helped save the lives of shooting victims in the past (Dionne), he had a deeply personal connection with the topic, a perspective that endowed him with a unique resolve to fight for the safety of Colorado citizens. But following his gut and doing what he felt was best for his constituents, ironically, turned out not to be what his constituents demanded of him. Morse’s ardent support of five gun-control bills—including HB 1224, probably the most controversial of them (Stokols)—eventually led to Morse’s and fellow Senator Angela Giron’s recall, making the two politicians the first in Colorado’s history to be unseated in special elections (Healy).

Morse was at the forefront of the successful effort in Colorado to pass sweeping legislation that tightened gun regulations and implemented extended background checks (Ferner, “John Morse, Colo.”) in the wake of the Newtown, Connecticut shootings of 2012. For his efforts, he was pursued vehemently by pro-gun activists and organizations (Millhiser). Morse persistently fought for his beliefs despite knowing the political risk he was taking in the purple state of Colorado, where voters are sharply divided on the issue (“Colorado Voters”). With “no regrets” (qtd. in Ferner, “State Sen.”), Morse did what he felt would be best for his state, martyring his Senate office for it and proving himself “courageous in [his] unyielding devotion to absolute principles,” as John F. Kennedy wrote in Profiles in Courage (Kennedy 19).

As a state senator in the very state where both the Columbine shooting tragedy of 1999 and the Aurora movie theater shooting of 2012 occurred, perhaps John Morse felt he had a greater responsibility than his Democratic colleagues across the nation to do something big. He pushed for passage of bills that, in a summary written by Morse himself for Newsweek, required 15 bullets to be the maximum per magazine, put in place mandatory background checks paid by gun buyers, allowed state judges control over firearms in the possession of domestic violence offenders, and prevented self-concealed gun permits from being obtained online (Morse). These regulations were anathema to many of his constituents: a Quinnipiac poll showed that 39% of independent voters and a mere 7% of Colorado Republicans supported these new gun bills, with a majority of Coloradans in opposition (“Colorado Voters”). In El Paso County, which encompasses the entirety of Morse’s district, large majorities voted for Mitt Romney and other Republicans (“El Paso County”), and unaffiliated voters make up a majority in the region (Lee), so Morse knew he didn’t have a Democratic base he could rely upon if he took huge political risks. Morse noted the opposition but held firm, saying before the recall vote, “Keeping Coloradans safe from gun violence is very worth your political career” (qtd. in Millhiser).

In addition to the majority of Republicans opposing gun control legislation, the National Rifle Association (NRA) has long been a zealous adversary of firearm reform efforts, earning a reputation for being the most effective interest group in American government, according to Fortune’s “Power 25” list featured by Schmidt, Shelley, Bardes, and Ford (250). The NRA also has a record of trouncing incumbents (Miller). Sure enough, the NRA and other gun advocacy groups launched a myriad of advertisements aimed at degrading and shaming Senator Morse (Rakich). One television ad asserted Morse’s proposals would leave the community with less freedom, and that “Morse voted for more taxes” (NRA Morse Recall). In actuality, the laws Morse supported enabled Coloradans to pay fewer taxes, with gun purchasers themselves paying what taxpayers otherwise would have (Morse).

John Morse did not “vote in platoons, joining whomever of [his] colleagues [were] equally enslaved in some current fashion.” Rather, he exercised the “independent judgment” that Kennedy called key to a democracy, the self-determining thoughts that “can enable us to surpass that foreign ideology that fears free thought more than it fears hydrogen bombs” (Kennedy 18). John Morse lost his job with fewer than 11% of registered El Paso residents voting to recall him (Weber), in a special election prompted by the state senator’s expression of his ability to think freely and autonomously, not as a meager “seismograph,” only “recording shifts in popular opinion” (Kennedy 15).

Morse told MSNBC’s Rachel Maddow that he and his caucus—inspired by Abraham Lincoln’s example—were taking note of public opinion, but no longer reading the thousands of pro-gun emails they received (The Rachel Maddow Show). Critics berated him, complaining that Morse wasn’t listening to the people who put him in office. What those behind this backlash didn’t realize was that Morse’s comment was in complete harmony with an idea at the heart of Profiles in Courage. Kennedy wrote that because politicians were selected to make rational decisions based on voters’ and the nation’s welfare, politicians “must on occasion lead, inform, correct, and sometimes even ignore constituent opinion, if [they] are to exercise fully that judgment for which [they] are elected” (Kennedy 15). And Morse didn’t ignore his constituents’ opinions; he acknowledged them while also recognizing that what he did was, however controversial, justified and honorable, done to protect the same citizens who were speaking against him.

John Morse has a long record of making other people’s well-being a priority, choosing a life devoted to helping people. Whether putting his own personal safety on the line as police officer, then chief; as a senior paramedic saving lives; as the CEO of a benevolent, non-profit senior citizen services organization (“Biography”); or as an earnest senate president battling for the protection of his constituents, Morse’s actions were selfless. In the face of the recall, Senator Morse concluded courageously that, “We had to do gun control, and I said months ago, if passing gun safety bills cost me my political career, that’s an amazingly small price to pay. The families of these victims have to pay a huge price every single day for the rest of their lives” (qtd. in Lee).