"Ask not what your country can do for you..."

John F. Kennedy’s inaugural address inspired children and adults to see the importance of civic action and public service. His historic words, “Ask not what your country can do for you – ask what you can do for your country,” challenged every American to contribute in some way to the public good. In this lesson, students learn about a theme in President Kennedy’s inaugural address, civic action, and consider how it applies to their own lives.

Essential Question: How does a leader inspire a nation or a group of people?

Students should be familiar with the concept of the inauguration of a president (see Additional Resources). A biography of John F. Kennedy is available here. There is a link to President Kennedy’s inaugural address on this page.

His audience reached far beyond those gathered before him to people around the world. In preparing for this moment, he sought both to inspire the nation and to send a message abroad signaling the challenges of the Cold War and his hope for peace in the nuclear age. He also wanted to be brief. As he’d remarked to his close advisor, Ted Sorensen, “I don’t want people to think I’m a windbag.”

He assigned Sorensen the task of studying other inaugural speeches and Lincoln’s Gettysburg Address to glean the secrets of successful addresses. The finely-crafted final speech had been revised and reworked numerous times by Kennedy and Sorensen until the President-elect was satisfied. Though not the shortest of inaugural addresses, Kennedy’s was shorter than most at 1,355 words in length and, like Lincoln’s famous speech, was comprised of short phrases and words. In addition to message, word choice and length, he recognized that captivating his audience required a powerful delivery. On the day before and on the morning of Inauguration Day, he kept a copy handy to take advantage of any spare moment to review it, even at the breakfast table.

What many consider to be the most memorable and enduring section of the speech came towards the end when Kennedy called on all Americans to commit themselves to service and sacrifice: “And so, my fellow Americans: ask not what your country can do for you – ask what you can do for your country.” He then continued by addressing his international audience: “My fellow citizens of the world: ask not what America will do for you, but what together we can do for the freedom of man.”

Having won the election by one of the smallest popular vote margins in history, Kennedy had known the great importance of this speech. People who witnessed the speech or heard it broadcast over television and radio lauded the new President. Even elementary school children wrote to him with their reactions to his ideas. Following his inaugural address, nearly seventy-five percent of Americans expressed approval of President Kennedy.

Begin the activity with a discussion about the most recent presidential inauguration. What happened that day? Were there students who watched it? Read about it? Listened to the inaugural address? What were some of the topics and ideas the president discussed in his speech? How did the crowd respond?

1. Explain that on January 20, 1961, John F. Kennedy, the youngest US president ever elected, gave an inaugural address which is now well-known for its powerful language and message. They will have the opportunity to examine historical evidence from the Kennedy Presidential Library to find out more about John F. Kennedy’s inaugural address and its impact on people at that moment in time.

2. Distribute copies of the letter.

3. Lead a discussion to interpret the information. Include some or all of the following questions:

4. According to students’ interests, share photographs of the inauguration and excerpts of the speech. Visit web pages on Passing the Torch and Poetry and Power, two museum exhibits about the inauguration.

5. Explain that many people remember the cold that day, but they also remember particular quotes from Kennedy’s speech. In the next lesson, they will find out more about Kennedy’s inaugural address.

Part 2: “Ask not what your country can do for you”

1. Ask if anyone knows a famous quote from Kennedy’s inaugural address. After students respond, write the quote on a blackboard or chart paper: “And so, my fellow Americans: ask not what your country can do for you—ask what you can do for your country.” Explain that these words are some of the most well-known from Kennedy’s inaugural address. Can they put the quote in their own words? What does it mean?

2. Have students brainstorm a list of actions they might take in response to John F. Kennedy’s call to service. What could they do to help their family, school, community, or country in some way?

3. As a class, select one action from the list that students generated. Devise an action plan and carry it out. Or, have students draw posters to publicize their civic action idea.

Have students imagine they watched President Kennedy’s inauguration on January 20, 1961, either on television or in person. Their assignment is to write a journal entry about the event. They can write the entry as themselves or an imagined character. The entry should include:

1. How might students check to see what John F. Kennedy actually said in his speech? Access President Kennedy’s inaugural address here. Have students read a transcript as they listen to the speech (translations of the inaugural address are also available here). Ask them to highlight the parts of the speech that might have inspired Brenda Sue Wesson to write a letter to the president. (Since the speech has many words that are unfamiliar to elementary students, it is best to preview vocabulary and concepts with them before reading the speech).

2. Have students study and present quotes from the speech. Divide the class into small groups. Have each group put the quote into their own words. Challenge students to memorize the quote, present it to the class, and explain what they think the quote means.

“If a free society cannot help the many who are poor, it cannot save the few who are rich.”

“The energy, the faith, the devotion which we bring to this endeavor will light our country and all who serve it—and the glow from that fire can truly light the world.”

“In the long history of the world, only a few generations have been granted the role of defending freedom in its hour of maximum danger. I do not shrink from this responsibility—I welcome it.”

3. Read and/or listen to all or part of the most recent inaugural address. What message do students hear? What part of it is most important to them? As individuals, or as a class, write a letter to the president, responding to the speech.

Hossell, Karen Price, John F. Kennedy’s Inaugural Speech. Heinemann-Raintree: 2005, 48 pages.
In addition to dense text written for upper elementary and middle-school students, this account describes in detail JFK’s inaugural ceremony. It breaks down the speech into sections and gives a detailed explanation with photographs to explain each excerpt. It also includes historical context leading up to the 1960 election and major events of Kennedy’s presidency.

John F. Kennedy Presidential Library and Museum: Access President Kennedy’s inaugural address here. (To find more of his speeches, select “Research Aids” under “Research.”) To access online resources on the inauguration, including memos and early drafts of the speech, visit the Poetry and Power and Passing the Torch special exhibits.

“Presidential Inaugurations: I Do Solemnly Swear” guides you through a series of lessons that introduce students to presidential inaugurations using primary source material.

Joint Congressional Committee on Inaugural Ceremonies includes videos, charts, and narratives on all aspects of the inaugural ceremony. A student-friendly chart listing the date and location of every inauguration has links to each president with information on who administered the oath of office, what bible was used, the length of the inaugural address, attire, weather, and other interesting facts. 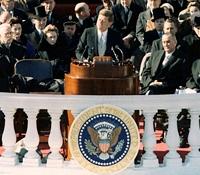 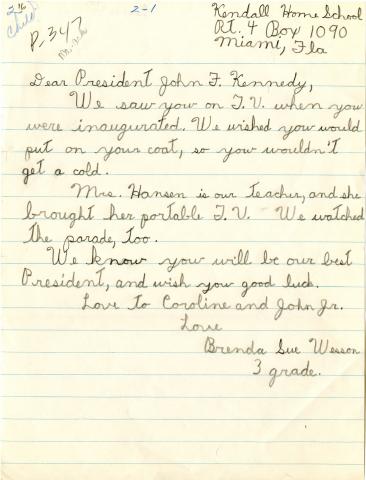