Race to the Moon Chronology Game

This lesson is drawn from a more extensive lesson entitled Race to the Moon!

Students use an informational text and a time line to examine how Cold War tensions between the United States and the Soviet Union turned early space exploration into the “Space Race.”

How can a time line develop historical understanding?

This is a stand-alone lesson and does not require any specialized knowledge or skills. However, it is helpful to introduce the concepts of the Cold War and space exploration by showing students a map of the United States and the former Soviet Union and images of the Moon and the first moonwalk.

Early space exploration was fueled, in part, by the Cold War competition between the United States and the Soviet Union. Space was another place for the two nations to demonstrate technological superiority and leadership.

In this lesson, students will read an informational text, examine a time line, and play a chronology game. The activities are drawn from a more extensive lesson entitled Race to the Moon!

Part I: Reading an Informational Text and Analyzing a Time Line

Space Quest: Become A Kennedy Era Space Expert: Students can view archival footage of the first American space flight, visit a space media gallery, learn an excerpt from one of President Kennedy’s most historic speeches, and access an online version of the Museum’s space exhibit. For an extra challenge, they can answer a bonus question about each resource.

NASA: NASA’s website provides a wide range of resources for educators on space exploration, the race to the Moon, and current NASA projects.

JFK Challenge: Free iPad App: The free JFK Challenge app for iPad brings American history to life for kids by turning them into astronauts and Peace Corps volunteers. Fly to the oon or help people around the world with this exciting offering from the JFK Library.

Americans in Space: Speeches, documents, photographs and an activity guide your exploration of the space program in the Kennedy administration. 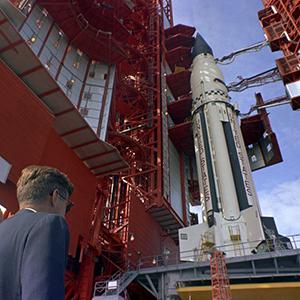 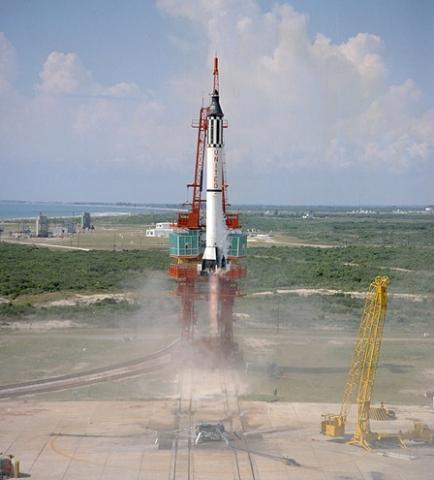 Learn about our special installation featuring Freedom 7, the iconic space capsule that US Navy Commander Alan B. Shepard Jr. piloted on the first American manned flight into space.