The 1960 debates between John F. Kennedy and Richard M. Nixon are historically significant because they were the first live televised presidential debates and they had great impact on voters in a close election. As students investigate a historic event from the 1960 presidential campaign, they will learn how political debates help voters select a candidate for office.

What criteria should voters use to select a leader?

It is helpful for students to have an understanding of the electoral process before implementing this lesson. Preview these vocabulary words:

During the fall of 1960, polls showed that Senator John F. Kennedy and Vice President Richard Nixon were in a very tight race to become president of the United States. Although still recovering from knee surgery, Nixon dashed from state to state, hoping to fulfill his campaign promise to visit all fifty states before the election. Kennedy campaigned hard to convince the public that though he was 43 years-old, and had not yet completed his second term as senator, he would make an excellent leader. His religion was another obstacle; he had to persuade a large segment of the population that it was unfair to dismiss him as a  candidate because he was Catholic.

In the fall of 1960, Americans had an opportunity “to meet” the candidates in a way never before available to voters. For the first time in history, Americans were able to watch presidential candidates from the Republican Party and the Democratic Party*, side by side, on television. Kennedy and Nixon had agreed to discuss their opinions on important issues in a series of four nationally televised debates. The first meeting took place on September 26, 1960. The debates caught the attention of the nation. By 1960, about 90% of American households had television sets and about 70 million people tuned in on the evening of September 26, 1960, the date of the first debate. They watched at home and in public places. They watch in cities and in the small towns. They watched to see what the two candidates would say, to hear where they stood on the issues, and to see how they responded to difficult questions. And what did they see?

Kennedy and Nixon were both skilled debaters. Nixon had been a star on his high school debate team and had polished his talent ever since. However, some historians believe Kennedy was able to use the debates to persuade undecided or skeptical voters that he had the ability to be president. He was an appealing figure to watch and he had learned how to speak to television audiences. Kennedy‘s confidence, knowledge, and leadership ability came through during the debates, and this reassured voters who had questions about his background and experience.

Did the debates help either candidate win over voters? Before the first debate, a Gallup poll showed Nixon only slightly ahead, 47% to 46%. In a Gallup poll taken after the fourth and final debate, Kennedy had edged out Nixon, 49% to 46%. A survey after the four debates showed that of an estimated four million voters who were undecided before the debates, three million became JFK supporters. Some historians believe that the debates made the difference in this close election.

*A Florida Democratic Primary Presidential debate was televised nationally on May 21, 1956 between two Democratic candidates for president, Adlai Stevenson and Estes Kefauver.

Part I: Taking a Stand

1. Explain that in a campaign, candidates need to let the voters know where they stand on the issues. What does it mean to take a stand?

3. Ask two or more students from each side to give a reason why they “agree” or “disagree” with the statement. If you so choose, invite students to change sides if they have changed their opinion after listening to their classmates’ responses.

4. Show the photograph of the debates and ask the following questions:

5. Explain that the photograph was taken on October 21, 1960, at the fourth and final debate between Senator Kennedy and Vice-President Nixon. Describe the purpose of a debate, emphasizing how the “take a stand” activity models a debate. Share the background information about the campaign of 1960 provided above.

1. Ask students to imagine that it is the morning of September 26, 1960, the day of the first live televised presidential debate. At home and at school, people are talking about the event and how they will get to see Senator Kennedy and Vice President Nixon on television that evening. Explain that debates provide a way for people to learn about the candidates in order to help them choose who they will vote for in an election.

2. Show students footage from the first debate. Access The Great Debate, a 15-minute documentary on the first live televised presidential debates (excerpts begin at 4:23 minutes into the film). You can access two short excerpts of the “Great Debate” on The President’s Desk exhibit on the JFK Library website. Click on the campaign button, and then the television set to access the “Program Guide.”

3. Ask students to think about what people can learn from a debate and record their answers on a piece of chart paper. You may use the following prompts to help students generate ideas:

4. Explain to students that when people watch a debate, they look to see if candidates have important leadership qualities. Ask students to list what qualities they think leaders should have and record their answers on the chart paper. You might also want students to consider if there are important qualities that are not evident in a televised debate or if a televised debate emphasizes aspects of a candidate that are NOT essential to being a good leader (i.e., appearance).

Part III: Creating a Class Book: How to Select a Candidate

1. Assign students to create a guide book to help voters pick the best candidate to lead the country (or state, city, etc.) In small groups, pairs, or as individuals, have students select one of the qualities listed on the chart paper. Each group (or individual) will write a paragraph describing the quality, why the quality is important to have as a leader, and how it can be identified in a candidate. Each quality should be accompanied by an illustration. Assemble the pages into a class book.

Have students watch a debate, either on television or provide a video clip. Using the guide book created in class, students will choose which candidate is their favorite and describe the qualities that make this person their choice.

Suid, Murray. How to Be President of the U.S.A. Palo Alto, California: Monday Morning Books, 2000.
An excellent book of ready-to-use activities.

The Great Debate: Online resources on the 1960 presidential debates from the Museum of Broadcast Communications. In addition to the documentary referenced above, there are videotaped reflections about the debate from people who witnessed it, historical information, commentary, and lesson plans (for secondary school students.) 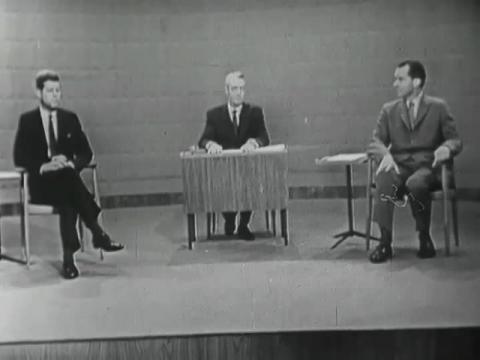 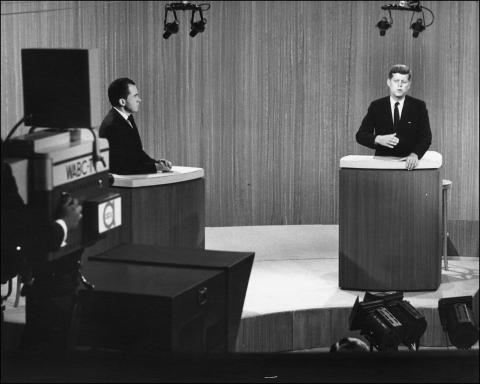