The Road to the White House Lesson Plan

The “Kennedy for President” button is one of the iconic symbols of John F. Kennedy’s 1960 presidential campaign. It is one of several primary sources featured in the Campaign Button module in the interactive exhibit, The President's Desk. All are presented within the context of a virtual campaign office. Highlights include television “programs” featuring speeches by JFK, a campaign spot and interview with Mrs. Kennedy, excerpts of televised presidential debates, and the Kennedy jingle. Campaign placards, bumper stickers, posters, buttons and pins, memos, a letter from a sixth grader to the candidate, and Frank Sinatra’s “High Hopes” 45 rpm record are featured, as well. All provide students with a sense of the spirit and energy of the 1960 campaign. For more historical background, refer to the JFK in History essay, Campaign of 1960.

In this activity, students explore the terminology of the campaign for the presidency. They next explore, individually or as a whole class, the primary sources in the campaign office and make the “trip” with JFK from the Democratic National Convention in Los Angeles, California to the 1960 presidential election on November 8th. They “travel” around a game board answering questions posed on each square with information gleaned from the primary sources featured in the virtual campaign office.

Goals/Rationale
By exploring the primary sources in the Campaign Button Module of The President's Desk interactive exhibit, students will gather information about the key people in the 1960 election and identify the steps one takes in running for presidential office.

Students will:
• analyze multiple primary sources
• identify the key steps in the presidential campaign process
• identify the candidates in 1960 and describe impressions of their performance in the campaign

National Standards for Civics And Government:
K-4, Standard 5: What are the roles of the citizen in American democracy?

Print each word below in large letters on its own 8 ½” x 11” piece of paper. Post these words in your room in sequential order reflecting the path to the presidency.

Photocopy one Word Challenge! handout and one Road to the White House Game Board for each student.

1. Begin by asking students to look closely at the “Kennedy for President” campaign button. Why might JFK’s campaign have selected this design? What might they have intended to communicate to American voters? What does the design communicate to the students today?

2. Next, introduce students to the terms involved in a presidential campaign and election. Ask students to look at the words around the room: “Can anyone figure out what these posters are about? What are all of these words about?”

Prompts if needed: “Are any of these words familiar to you? If you used one of these words in a conversation, what topic might you be talking about?” If students haven’t already done so, point out that these posters all have to do with becoming president of the United States.

3. Web of ideas: The President. Draw a circle on the board and write the word, “president” in the center. Ask students “Tell me anything you know about being the president.” Write student answers on strands of a “web” around the circle. Words and phrases might include: lives in the White House; meets with world leaders; elected every four years; commander-in-chief; decides to go to war; gives speeches; decisions affect everyone in the country.

4. Campaign Talk. Ask students to consider the words posted around the room. Adapt these suggestions as necessary for your group. “If you think you know what a word means, or want to take a guess, stand underneath that word – without talking.” Invite students to get out of their seats and quietly stand under a poster. Explain the directions: “Let’s assume each of you is running for president of the United States. These words are key to your becoming president. Let’s see if you can answer two questions”:

Allow students one minute to come up with answers. If there is more than one person under a word, invite students to talk to everyone in that “word group” and see if they can come to agreement about the meaning of the word and its relevance to the presidency. Point out that some words may have more than one meaning.

Go around the room, asking a student representative from each group to offer a definition: “You want to be President. What does this word have to do with you getting elected?”

Ask students to explain how they came up with their answers. Then discuss the correct answer, drawing from the glossary handout. If any words aren’t chosen, invite students to look the words up in a dictionary or reference book.

5. Word Challenge!: JFK’s Path to the Presidency. Introduce John F. Kennedy and inform them that learning these words will help them play a board game based on an online exhibit they will see. Explain that John F. Kennedy, a senator from Massachusetts, ran for president in 1960 and won the election.

Have students work in pairs. Distribute a copy of the Word Challenge! handout to each student and review the directions. “First you’ll use the special words on the page to fill in the blank of each stage of JFK’s path to the presidency. Then you’ll figure out the order in which JFK accomplished each of these stages on his way to becoming president. Number the squares 1-8.

Debrief the activity by going around the room. Ask students to tell which word square comes next and read the description of the stage in JFK’s path to the presidency.

6. Introduce students to the JFK campaign office in the Campaign Button module. Show them JFK’s speech announcing his candidacy (program #1 on the television set).

7. Distribute a Game Board  to each student. Introduce the Game Board, and explain that, as they explore the Campaign Button module, they will be making the trip to the 1960 Democratic National Convention and then on to the November 8th election. Assign either as homework or explore as a whole group activity. Have them record their answers on the Game Board. The final question may be answered with students’ previous knowledge or by clicking on January 20, 1961 in the White House Diary.

On a separate piece of paper, have students jot down what evidence helped them answer the question for each square of the Game Board.

8. Evaluation. Review students’ answers and have them cite their evidence. Ask them to write a summary of the “trip” and comment on what portion was most memorable for them and why. 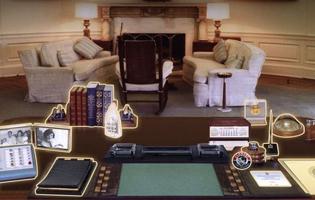 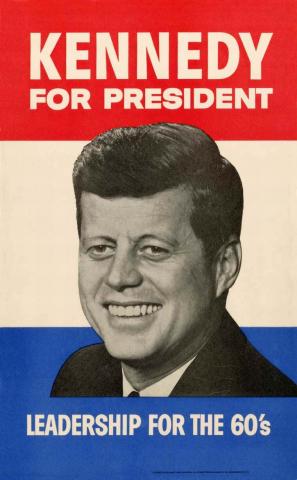