Students conduct historical research on individual and collective efforts to achieve gender equality in the United States by listening to and discussing a nonfiction picture book, analyzing an historical photograph, and researching and taking action on the current gender pay gap. 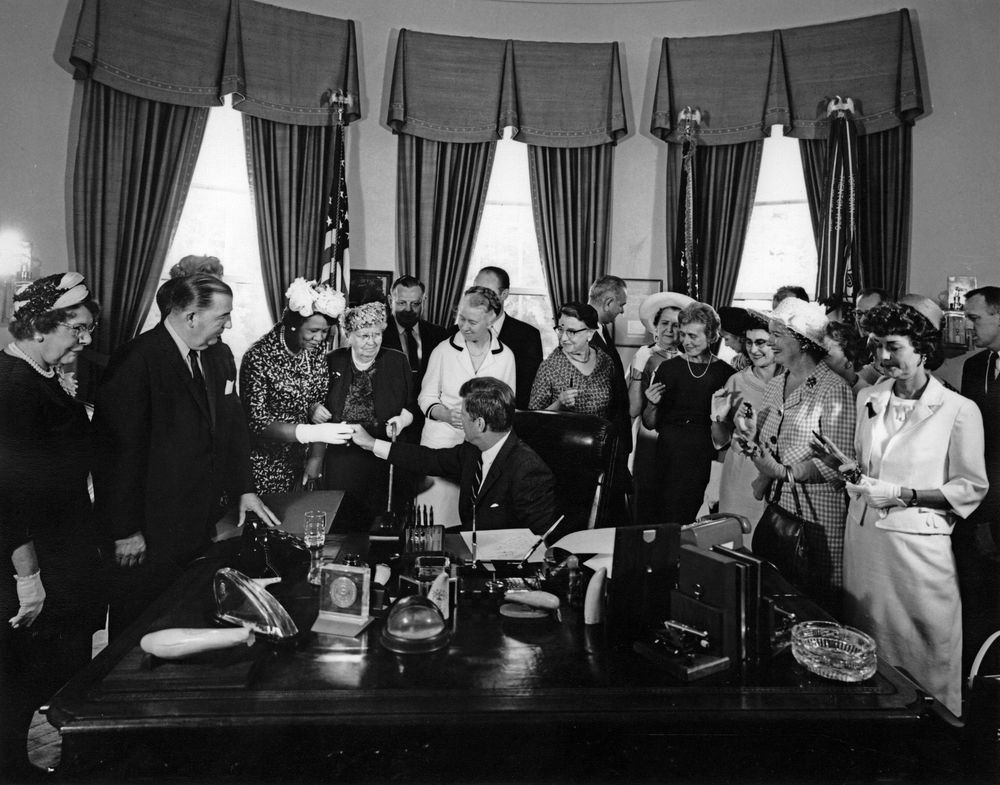 After signing the Equal Pay Act on June 10, 1963, President Kennedy hands a pen to Dorothy Height, civil rights activist and former Director of the Women’s Bureau in the Department of Labor. Esther Peterson (in light colored suit behind Kennedy), Assistant Secretary of Labor for Labor Standards, led the effort to pass this landmark legislation. For the names and positions of each person pictured, see AR7965-G.

Download this lesson, including the photograph, as a pdf.

In this lesson, elementary students conduct historical research on individual and collective efforts to achieve gender equality in the United States. First, students investigate the fight for voting rights for women by listening to and discussing Elizabeth Started All the Trouble, a nonfiction picture book by Doreen Rappaport. Then, they analyze an historical photograph to learn about the Equal Pay Act of 1963 and Esther Peterson, the highest-ranking woman in the Kennedy Administration. Lastly, an assessment brings a civic engagement component to the lesson as students research the gender pay gap today, and take action to address that issue.

Goal
Using children’s literature and primary source material, students will learn about women who fought for equal rights and the strategies they used and continue to use to achieve change.

Essential Question: How have women worked to fight for equal rights?

Historical Background
In 1960, although women made up more than one third of the labor force, they only earned about 60 cents for every dollar earned by men. Although legislation to advance equal pay had been attempted in 1870, and from 1945 through 1963, a new effort during the Kennedy Administration would result in another step forward towards gender equality.

President Kennedy appointed Esther Peterson, a former labor organizer and lobbyist, as Director of the Women’s Bureau in the Department of Labor and later as the Assistant Secretary of Labor for Labor Standards. At her urging, Kennedy created the Presidential Commission on the Status of Women and supported her work in organizing the passage of the equal pay legislation. Her leadership in collecting data and bringing together key lawmakers, community and religious leaders, and labor activists was essential in the effort.

When President Kennedy signed the historic legislation on June 10, 1963 he remarked that it was a “significant step forward,” but acknowledged that “much remains to be done to achieve full equality of economic opportunity.” Historians consider the Equal Pay Act to have been one of the most significant initiatives since the early twentieth century in furthering the rights of women.

Today, women continue to earn less on average than men. According to 2018 data reported by the National Women’s Law Center, women were paid 82% of the income for men.

Students research equal pay today. Using the evidence they gather, they plan an action to promote the cause of equal pay. This could include writing a letter to a federal legislator, giving a speech, creating a pamphlet, or writing an editorial for a local paper.

Association of American University Women:
https://www.aauw.org/research/the-simple-truth-about-the-gender-pay-gap/
Infographics, graphs, and charts with specific information on women of different ethnicities, pay gaps in specific job areas, and an interactive map of the US with information on each state.

Fact Sheet on the wage gap from the National Women’s Law Center https://nwlc-ciw49tixgw5lbab.stackpathdns.com/wp-content/uploads/2018/10/The-Wage-Gap-Who-How-Why-and-What-to-Do-2019.pdf

National Committee on Pay Equity
https://www.pay-equity.org/day.html
Information on Equal Pay Day (held on the day that “symbolizes how far into the year women must work to earn what men earned in the previous year.” ) Includes an “Equal Pay Day Kit”, descriptions of activities on past Equal Pay Days, and a list of actions individuals and organizations can take to work towards equal pay.