During the spring and summer of 1963, Americans were seeing images on television and in the newspapers of Buddhists protesting the harsh treatment they were receiving under the Diem government of South Vietnam. The South Vietnamese government’s actions made it more difficult for the Kennedy Administration to continue its strong support of President Diem. The Kennedy Administration was in a tenuous position, trying to contain communism in Southeast Asia, but supporting an anti-Communist government that was not popular with a large number of its citizens and was guilty of acts objectionable to the American public. In this lesson, students will consider the language a president might use in trying to create the right balance in tone for both American and foreign audiences when discussing US involvement in other parts of the world.

How might a president address both domestic and foreign audiences in discussing a difficult situation abroad?

Massachusetts Frameworks
US II.20 – Explain the causes, course and consequences of the Vietnam War and summarize the diplomatic and military policies of Presidents Eisenhower, Kennedy, Johnson, and Nixon.

Students should have a working knowledge of the Cold War. They should be able to analyze primary sources.

After World War II, the French tried to re-establish their colonial control over Vietnam, the most strategic of the three states comprising the former Indochina (Cambodia, Vietnam and Laos). Following the defeat of the French, Vietnam was partitioned by the Geneva Accord of 1954 into Communist North Vietnam and non-Communist South Vietnam, which was divided on religious and political lines. The United States supported a military government in the South and the decision of its leader, Ngo Dinh Diem, to prevent free elections which might result in the unification of the country under the control of the Communists. In an effort to take over South Vietnam, the Communist North supported attacks by guerrilla forces on the South. The Geneva Accords quickly began to crumble.

American foreign policy after World War II had been based on the goal of containing Communism and the assumptions of the so-called "domino theory”—that if one country fell to Communism, the surrounding countries would fall, like dominoes.  The Eisenhower administration was concerned that if Vietnam fell under Communist control, other Southeast Asian and Pacific nations, including even the Philippines, would fall one by one. In response to that threat, the Southeast Asia Treaty Organization (SEATO) was formed in 1955 to prevent Communist expansion. President Eisenhower sent some 700 military personnel as well military and economic aid to the government of South Vietnam. This effort was foundering when John F. Kennedy became president.

The suppression of Buddhists in South Vietnam became known as the "Buddhist crisis." President Ngo Dinh Diem did little to ease the tensions, though he later promised reforms. Many people suspected that his brother and closest advisor, Ngo Dinh Nhu, was the actual decision maker in the Saigon government and the person behind the Buddhist suppression.

The Buddhist demonstrations continued throughout the spring and summer. When a Buddhist monk publicly set himself on fire in June, the photograph of the event made news around the world.

President Kennedy tried to impress upon President Diem the need for major government reforms in Saigon, but Diem ignored the warnings. In August, Diem declared martial law and his forces raided the pagodas of the Buddhist group behind the protests. Soon after, South Vietnamese military officers contacted US government representatives and inquired about what a US response would be to a military coup in Saigon.

On August 24, 1963, Cable 243 was sent to the US Ambassador to South Vietnam Henry Cabot Lodge, Jr. and set the course for US support for a military coup. The cable stated that Diem needed to remove his brother from power and if he did not, “then we are prepared to accept the obvious implication that we can no longer support Diem. You may also tell appropriate military commanders we will give them direct support in any interim period of breakdown central government mechanism.” After the cable was sent, President Kennedy and his advisors met several times to discuss the potential consequences of a coup in Vietnam and how the United States should react. The tape recorded meetings reveal President Kennedy's reservations about US support for a military coup in South Vietnam. A week after Cable 243 was sent, the South Vietnamese generals told Lodge that they were not ready to stage a coup.

In early September, President Kennedy granted two television interviews. On September 2nd, he was interviewed by Walter Cronkite on the CBS network and on September 9th he was interviewed by David Brinkley and Chet Huntley on the NBC network. In both of these interviews, he was asked about South Vietnam. President Kennedy’s intended audience for his remarks was both US and foreign. The transcript of the Cronkite interview was sent to Ambassador Lodge with a note that it represented “the official US public position.”

A few weeks later, President Kennedy sent Secretary of Defense Robert McNamara and Chairman of the Joint Chiefs of Staff Maxwell Taylor to South Vietnam to provide their assessment of the situation. In their public report, they noted progress on the military front but difficulties with the political situation.  They commented that by the end of 1963, “the US program for training Vietnamese should have progressed to the point where 1,000 US military personnel assigned to South Viet-Nam can be withdrawn.”

On November 1, 1963, the South Vietnamese government was overthrown. President Diem, refusing an American offer of safety contingent upon his resignation, was assassinated. In the final weeks of his life, Kennedy wrestled with the need to decide the future of the United States’ commitment in Vietnam. There were approximately 16,000 military advisors in South Vietnam. Whether or not Kennedy would have increased military involvement in Vietnam or negotiated a withdrawal of military personnel still remains a hotly debated topic among historians and officials who served in the administrations of President Kennedy and President Lyndon B. Johnson.

(All materials all included in the downloadable pdf.)

For homework, have students write out their newspaper columns.

Provide students with the State Department’s American Opinion Summary dated September 10, 1963 which summarized opinions from various American newspapers on US policy in Vietnam. In what ways did news outlets react positively or negatively to JFK’s interviews? 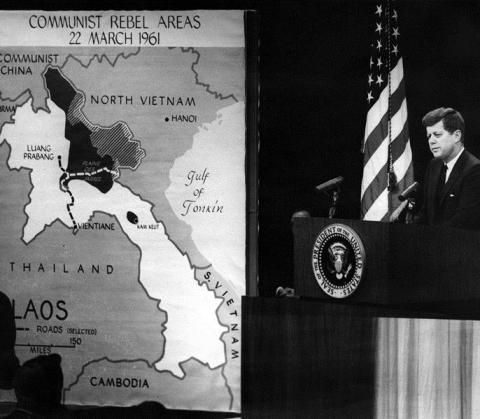