Students learn about ancient symbols and ornamental and architectural elements to identify some symbols of American democracy in the White House as an introduction to the origins of common symbolic representations of the United States and its values.

Goals/Rationale:Students will learn about ancient symbols and ornamental and architectural elements and identify some symbols of American democracy in the White House as an introduction to the origins of common symbols which represent the United States and its values.

Essential Question: What symbols of democracy can you find in the White House and what do they signify?

Students should have a basic understanding of US government and history, including the White House.

When First Lady Jacqueline Kennedy was eleven years old she toured the White House during a family trip to Washington, DC. In 1961, she told Life magazine, “From the outside I remember the feeling of the place. But inside all I remember is shuffling through. There wasn’t even a booklet you could buy.” As first lady, Jacqueline Kennedy reinvigorated the rich history of the White House. She researched its residents, searched for furniture and antiques that had become buried in storage, and made a wish list of items that had belonged to previous presidents which she hoped would be donated to the “White House Restoration Project.” Mrs. Kennedy spearheaded the planning and execution as a hands-on manager. She could often be seen digging through boxes and cataloging her finds. As the Fine Arts Committee’s appeal letter to potential donors stated, with the success of the Project, the White House would become “a mecca for sightseers, a place where distinguished guests are entertained, [and] will be all our founding fathers hoped it would be.”

As a student of history, like her husband, Mrs. Kennedy understood and valued the many changes to the White House that had transpired since the cornerstone was laid in 1792. Designed by Irish-American architect James Hoban in the late eighteenth century, the White House features elements of later periods. For example, after the British burned the White House during the War of 1812, it became President James Monroe’s task to refurnish the house with “articles of the best kind, and on the best terms,” as he put it. Having served as US Minister to France under George Washington, President Monroe possessed a particular fondness for France and French style. Monroe’s refurnishing of the White House coincided with the popularity of “French Empire Style,” named for French Emperor Napoleon Bonaparte (1804-1814), which featured expensive silk upholstery and ancient Greek, Roman, and Egyptian motifs. Napoleon promoted the success of French military victories, including his Egyptian campaign, by equating his power with that of Egyptian pharaohs, Roman emperors, and Greek gods. A close look at the furnishings in the White House State Rooms reveals ancient symbols as well. However, in the context of the White House, they refer to the classical origins of the United States government: Greek democracy and the Roman Republic.

The Blue Room is an example of President Monroe’s interest in French style and of the treasure hunt that was part of the restoration project. Through her research, Mrs. Kennedy learned that in 1817 President Monroe purchased a thirty-eight piece set of chairs and sofas from French cabinetmaker Pierre-Antoine Bellangé. While searching through the White House, she found a table in a storage room and a bust of George Washington in the men’s restroom, both of which had been in President Monroe’s Blue Room. Mrs. Kennedy brought them upstairs and placed them in the room as they appeared in an old engraving. After the discovery of the table was made public, one of the original chairs was donated to the project and Charles Francis Adams, a descendant of John Adams and a member of Mrs. Kennedy’s acquisitions committee, paid for the reproduction of thirteen chairs.

In the White House, the president and first lady receive heads of state and host dinners in the state rooms. The Red and Green Room are “parlors” or living rooms with comfortable chairs and fireplaces. The Blue Room and the State Dining Room are used for hosting dinners for heads of state from other countries. While Mrs. Kennedy used French furniture in the Blue Room to restore the room to President Monroe’s taste, in the Red Room she used American-made furniture with a French influence. Many of the Red Room pieces were made by Charles Honoré Lannuier, a French emigrant who settled in New York in 1803. He was one of the first furniture makers to use the “American Empire” style. Like “French Empire,” his furniture incorporated decorative elements inspired by the architecture and furnishings of ancient Egypt, Greece, and Rome.

Track how many symbols each group was able to identify in five minutes. Note whether students recorded the meaning of the symbols in the margins of the color copies. When assessing the designs, consider to what degree students were able to use creativity to integrate the ancient forms into the pieces of furniture. 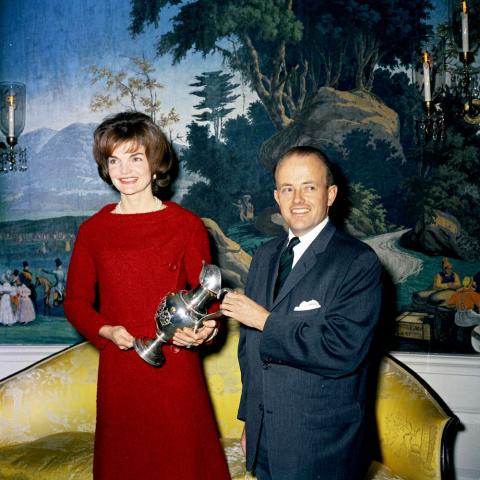