Recipe for an Inaugural Address

In this lesson for middle grades, students consider what “ingredients” might go into the speech that will launch a president’s term in office as they examine some of the most memorable inaugural addresses of the past.

1. Ask students to imagine being an advisor to the newly-elected president who has asked for ideas about what to put into his or her upcoming inaugural address. “Give me your recipe,” the president-elect says, “because we need to start cookin’!” You begin by writing down some notes and questions.

Go over this list of “ingredients” and related questions with the whole class, either writing on the board or presenting as a handout.

One nation, indivisible
What words will help bring people together following a hard-fought election? What to say to those who voted for a different candidate? What are the basic beliefs and principles that unite us as Americans?

Historical moment
Where have we come from as a nation? What are the great challenges and opportunities of this time in history? What kind of future are we looking at?

Goals
What will the priorities of this administration be? What new course is the president charting for the country?

Audiences/messages
Who else is the speech aimed at? Along with the American people, which groups at home and around the world should the president be addressing? And what are the messages?

Inspiration
How can the president best convey a sense of hope? What can this speech do to help get citizens energized and involved?

Emotional content
What other feelings or attitudes should be expressed given the current circumstances and mood of the country?

Language and form
How should the speech be structured? In what ways can the president use language that will lift the address to a level above that of other speeches given while still keeping it in his or her own voice?

2. Continue with students in their role as advisors: Using these categories and the related questions, examine some outstanding inaugural addresses from the past, beginning with John F. Kennedy’s.

Hand out copies of JFK’s inaugural address. Divide the class into seven small groups, and assign a category to each team. Ask them to read Kennedy’s speech, and to search for evidence of whether he incorporated the particular ingredient and in what ways. The whole class reassembles and each group reports its findings.

3. As a homework assignment, ask students to go through a similar process on their own with one of the following speeches:

4. Students should now be prepared to write a “Memo to the President-Elect” with their suggested ingredients for his or her upcoming speech.

5. Finally, have the class read and listen to the most recent inaugural address, analyzing and comparing it with the “recipes” contained in their memoranda.

The American Presidency Project at UC Santa Barbara, an online source for all presidential inaugural addresses 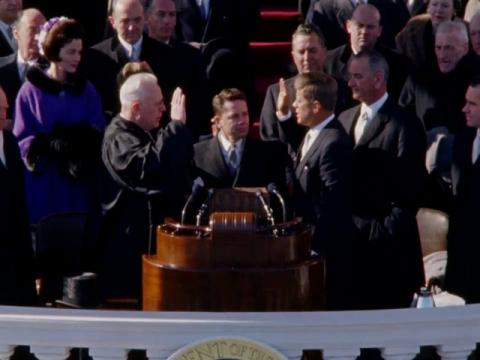