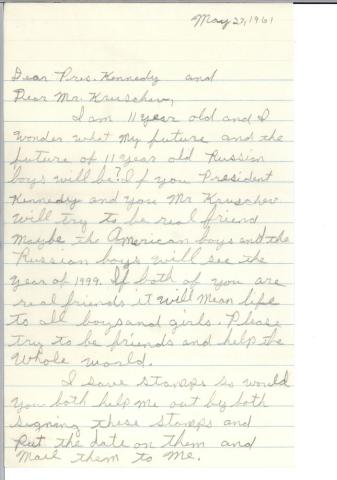 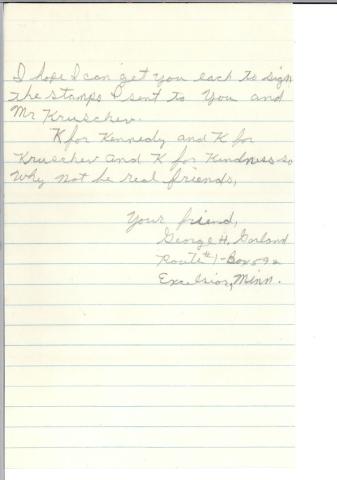 Students learn that the First Amendment of the Bill of Rights guarantees several rights, including freedom of speech and the right to petition the government for redress of grievances. By analyzing a letter from an eleven-year-old boy to President Kennedy, students discover that young people have the right to take civic action on issues of concern. They learn that US President John F. Kennedy and USSR Premier Nikita Khrushchev were leaders of two countries in conflict during the Cold War and what impact that tension had on young people.

How does the Bill of Rights empower young people to participate in a democracy?

It is helpful for students to be familiar with the Constitution and the Bill of Rights.

A strong democracy depends on civic engagement -- active citizens who participate in government and exercise their rights. By learning about the US Constitution, students can develop the civic knowledge they need to take civic action and participate fully in their communities and government.  For young students, the First Amendment of the Bill of Rights provides accessible content about rights and freedoms. By analyzing primary sources from a different period in time, students can learn how people in the past have exercised their First Amendment rights. These examples can guide and inspire students to take civic action in their own lives.

The John F. Kennedy Presidential Library and Museum archive contains hundreds of thousands of letters from people of all ages who exercised their First Amendment rights by writing a letter to President Kennedy.  Many of these messages can be considered petitions because they make requests of the president of the federal government. The authors also exercised their freedom of speech as they agreed or disagreed with Kennedy’s actions, shared information, and gave advice to the president and other government officials.

In the letter dated May 27, 1961, George Garland, an eleven-year-old boy from Exelsior, Michigan writes to “Pres. Kennedy” (President of the United States John F. Kennedy) and “Mr. Khrushchev” (Premier  of the Soviet Union) to “please try to be friends and help the whole world.” The letter shows evidence of deep concern as George “wonders” about his future and that of Russian boys. By suggesting that a friendship between Kennedy and Khrushchev might enable “American boys and Russian boys to see 1999,” the author implies that the future of the world rests in the hands of the two leaders. Neither a response, the stamps mentioned in the letter, nor evidence of a letter to Soviet Premier Nikita Khrushchev could be found in the Kennedy Library archival collections. George Garland’s letter, which references his worries about the future, conveys a sense of imminent danger. What was happening at that time to warrant such concern from an eleven-year-old boy?

According to the date on the letter, May 27, 1961, it was written five days before Kennedy’s much anticipated visit with Khrushchev in Vienna, Austria. The meeting was an historic event because of the conflict and tension between the United States and the USSR. The United States and its allies were in a decades-long struggle with the Soviet Union known as “The Cold War” that had begun after World War II. The two superpowers did not engage in direct combat, but continually antagonized each other through political maneuvering, military coalitions, espionage, propaganda, arms buildups, economic aid, and proxy wars between other nations.

In June 1961, Kennedy met with Khrushchev in Vienna, Austria. The stakes were high since both countries had nuclear weapons. The threat of nuclear war was so real to people that they had fallout shelters in their homes and communities in case of a nuclear disaster. Not only was the summit unsuccessful in its goal of building trust between the two countries, but it raised tensions between the two superpowers--particularly in discussions regarding the city of Berlin.

As a result of these threatening developments, Kennedy ordered substantial increases in American intercontinental ballistic missile forces. He also added five new army divisions and increased the nation's air power and military reserves. The Soviets meanwhile resumed nuclear testing and President Kennedy responded by reluctantly reactivating American tests in early 1962. The two superpowers came dangerously close to nuclear conflict in October 1962 when the United States discovered missile sites built by the Soviet Union on Cuba, but they eventually resolved the crisis through diplomacy. In the final months of the Kennedy presidency, Cold War tensions seemed to soften as the Limited Nuclear Test Ban Treaty was negotiated and signed. In addition, Washington and Moscow established a direct line of communication known as the "Hotline" to help reduce the possibility of war by miscalculation.

Write a Letter to the President: Students can watch a 15-minute video about the importance of letter writing which provides examples of letters to President Kennedy from young people, and guides students to write their own letter to the president. Includes letter writing templates.

The First Amendment: Five Rights in One!: In this 45-minute interactive virtual program, students explore the First Amendment freedoms through historical primary sources from the National Archives. It is offered as a part of “We Rule: Civics for all of US”. Visit the National Archives civic education programs for more information, including how to request a program for groups of 10 or more students.