Students analyze the results of the 1960 election, collect data for a recent presidential election, and identify changes in voting patterns. 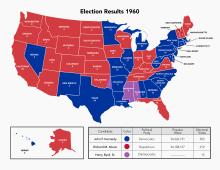 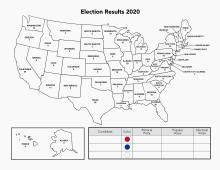 It is helpful to have some knowledge of the Electoral College (see Additional Resources.)

“He’s too young to be president.” “He doesn’t have enough experience.” Voters expressed these same concerns some 48 years ago when a 42 year-old senator from Massachusetts threw his hat into the ring as a Democratic candidate for president.

The campaign race was neck and neck through the fall and included significant historic events. On September 26, 1960, over 70 million Americans tuned in to see Democrat John F. Kennedy and Republican Richard M. Nixon, side by side, in the first televised presidential debate. Kennedy, well-prepared, tanned, and smartly dressed in a dark suit, exuded calm and confidence. Nixon, who was recovering from a knee injury, and exhausted from extensive campaigning, sweated profusely under the studio lights. Although three more debates would follow, many voters judged the candidates based on their television appearance that evening. A poll following the debate reported Kennedy edging out Nixon, 49% to 46%. In late October, Kennedy’s advisors convinced him to make a telephone call to a pregnant Coretta Scott King to offer support. Her husband, Martin Luther King Jr., had been unjustly jailed. News of the call was well-received by thousands of African American voters. Some historians believe the call galvanized the black vote and led to a Kennedy victory.

On Election Day, November 8, 1960, the race was still close. Not until 3:30am on November 9th, did John F. Kennedy pull himself away from the incoming results on television to make his way to bed in Hyannis Port, Massachusetts. Even with a disappointing loss in Ohio, he had garnered 261 electoral votes, 8 votes shy of the target number - 269. About two hours later, a secret service security detail was sent to the Kennedy compound to protect the new president: his victory was almost assured when results came in from Michigan that would make it impossible for Nixon to win.

How did Kennedy win the 1960 election? Nixon actually won 26 states, but the 23 states Kennedy won held more electoral votes (see 1960 Election Resultshandout.) The number of electors for each state is based on its population (the number of senators plus representatives.) Kennedy increased his total by winning several states with big urban centers in the Northeast and in industrial states. With the help of his Texan vice presidential candidate Lyndon B. Johnson, he was able to deliver much of the South. Nixon won big victories in the farm belt and in the West, where states (with the exception of California) have fewer electoral votes. In three states, some or all of the electors voted for segregationist Harry F. Byrd Sr.

Challenge your students to analyze the results of the 1960 election. You may reproduce the map, 1960 Election Results, or project the image, to help them with these discussion questions.

Use the blank Electoral College mapto record the results of a presidential-year election.

Have students create a news show in which they recount and interpret election results. The show may focus on the 1960 election, a current election, or a comparison of the two. The script should include “commentators” who report and analyze the election results.

Designate regions on the map, i.e., northeast, south, northwest, southwest, midwest. Have students identify which candidate won in each region.

"The Most Powerful and Precious Right": A Voting Rights Photo Book: Drawing on the JFK Library archives and other collections, this resource presents the story of voting rights in the United States and, in particular, the challenges and risks citizens and leaders have taken to address racial discrimination in voting. Includes photographs, documents, and guiding questions.

National Student Mock Election: Information on how to participate in this national program. The JFK Presidential Library and Museum is the state coordinator for Massachusetts.

National Council for the History Education 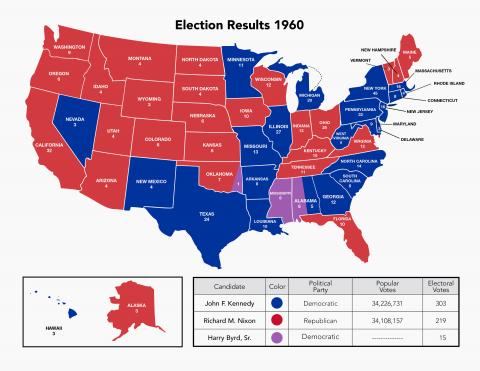