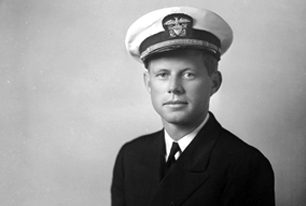 Nearly twenty years after his own military service in World War II, President Kennedy prepared the nation to meet a different kind of military challenge, “...new in its intensity, ancient in its origin...” He ordered that the nation’s special forces and unconventional warfare units be increased. The ranks of the “Green Berets,” the US Army’s Special Forces, were greatly expanded, and the Navy SEALs were commissioned. In recognition of President Kennedy’s vision and commitment to the Special Forces, the Special Warfare Center and School at Fort Bragg was named in his memory.

In celebration of the opening of the Kennedy Library’s new Legacy Gallery later this spring, the Library is pleased and honored to accept a plaque of the John F. Kennedy Special Warfare Center and School’s insignia for inclusion in the exhibit.

To attend this event, please RSVP to Nicole.Frechette@jfklfoundation.org.

As a special thank you, all veterans are welcome to free admission on this day.