Jacqueline Kennedy Entertains: The Art of the White House Dinner 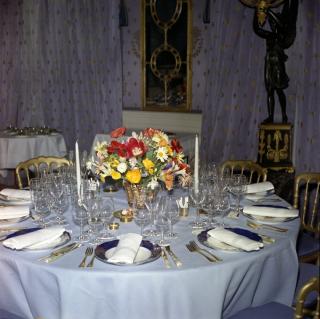 As White House hostess, Jacqueline Kennedy took a personal interest in the artists that performed for the president and his guests. The agreement of cellist Pablo Casals, one of the most celebrated musicians of the 20th century, to play at the November 13, 1961 dinner at the White House for the Governor of Puerto Rico was a great triumph. 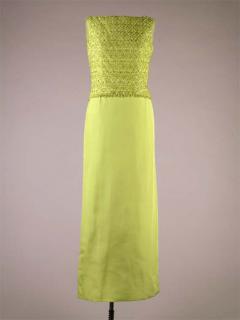 Casals had refused to play in the United States since the government had recognized the regime of dictator Francisco Franco of Spain, the cellist's native country. Not only would Casals break his personal embargo, but one of the world's most respected musicians would enhance the first lady's quest for more uplifting entertainment at the White House. Casals, accompanied by pianist Mieczyslaw Horzowksi and violinist Alexander Schneider, performed a program of pieces by Mendelssohn, Schumann, and Couperin. That evening, Mrs. Kennedy wore this beaded silk gown designed by Oleg Cassini.

Perhaps no other White House dinner had more personal meaning for Jacqueline Kennedy than the evening honoring French Minister of Culture André Malraux at the White House on May 11, 1962. Both President and Mrs. Kennedy shared an admiration of Malraux's multi-faceted career as a novelist, art historian, explorer, Spanish Civil war fighter pilot, World War II resistance leader and advocate of the arts. The first lady and Malraux had developed a friendship following a tour of Paris art museums during the Kennedy's state visit to Paris in June 1961. By according him all the courtesies normally reserved for a head of state, the Kennedys hoped to focus national attention on the role of the arts in America and encourage the development of Washington as a cultural center. 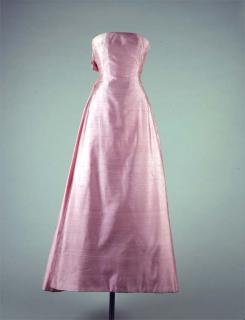 At the end of the evening, Monsieur Malraux whispered a promise to Jacqueline Kennedy that he would send to her France's most famous cultural treasure, the Mona Lisa , to be displayed at the National Gallery in Washington. Jacqueline Kennedy wore this shantung silk gown, designed by Guy Douvier for Christian Dior, at the White House dinner honoring French Minister of Culture André Malraux.

Jacqueline Kennedy's work to restore the rooms and furnishings of the White House transformed it from a place where the president worked and lived into what she called "an emblem of the American Republic." This created a stage for the celebration of intellectual and artistic excellence. No event exemplified her work more than the dinner held to honor the 49 living Nobel Prize Winners of the Western Hemisphere on April 29, 1962. In his toast to the honored guests that evening, 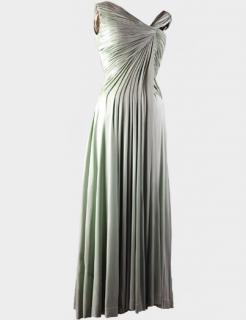 President Kennedy noted that it was "the most extraordinary collection of talent, of human knowledge, that has ever been gathered together at the White House with the possible exception of when Thomas Jefferson dined alone."  That evening, Jacqueline Kennedy wore this pleated celadon silk jersey evening dress designed by Oleg Cassini.

The exhibit also features copies of remarks made at dinners by President Kennedy with his own handwritten notes, and examples of table settings used at dinners in the Kennedy White House. In addition, the exhibit includes Mrs. Kennedy's handwritten memos and letters regarding entertainment, guest lists, image seating plans , menus, table settings and flower arrangements which illustrate her personal involvement and attention to detail in planning the events.