John F. Kennedy was the first president to conduct live televised press conferences. During the course of his Presidency, an average of 1 every 16 days. The first aired on January 25, 1961, and was viewed by an estimated 65 million people. Portions of the press conferences are presented in the exhibit illustrating the range of domestic and international issues addressed by President Kennedy during his tenure in the White House.

Although some worried about the risk of mistakes by the President, and others thought some journalists showed insufficient respect for the dignity of his office, both the public and the press responded enthusiastically to JFK's innovative live televised news conferences. A poll taken in 1961 indicated that 90 percent of those interviewed had watched at least one of his first three press conferences; the average audience for all the broadcast conferences was 18 million viewers.

The State of the World

The Cold War, pitting the western democracies (led by the United States) against the Communist nations (led by the Soviet Union) had been disturbing world peace for 16 years when John F. Kennedy became President. The two sides vied for the support of neutral countries.  Divided Berlin, located 200 miles inside the Soviet-controlled East Germany, was the symbolic center of the Cold War, but tensions circled the world: the seizure of power by Fidel Castro in Cuba, the threat of Communist infiltration into newly independent Laos, and maneuvering to influence in the Middle East.

An interactive display allows visitors to get briefed by advisers on the leading issues of the day, then try answering actual questions posed to President Kennedy by members of the press.

Abstract brass sculpture of President John F. Kennedy depicting his hair, arm and a pointing hand as if in the act of questioning a member of the press, a caricature of his typical stance at a presidential press conference. This sculpture, made by Herman Perlman, is set in a mahogany base with a Presidential seal medallion embedded in center.

This Emmy Award medallion was presented to President Kennedy as a "Token of admiration and esteem" for his participation in the first-ever live televised presidential debates during the 1960 election. It is engraved with this inscription on the reverse: "Presented as a token of admiration and esteem to President John Fitzgerald Kennedy for restoring to the American people the spirit of the Lincoln and Douglas debates and in the vastly wider area of communication afforded by television and at a time when the need for national unity and understanding was never more vital".

Reproduction of the Independence Hall Inkstand

On April 27, 1962, the White House News Correspondents and Photographers presented President John F. Kennedy with this replica of the inkstand set used by signers of the Declaration of Independence. It includes a tray, quill holder, ink well and blotting sand. The replica was made by Reed and Barton Silversmiths of Taunton, MA.

In response to President Kennedy's innovation of holding live televised press conferences, the Radio and Television Executives Society presented him with this medal for his "Outstanding Contribution to Broadcasting" on March 9, 1961. 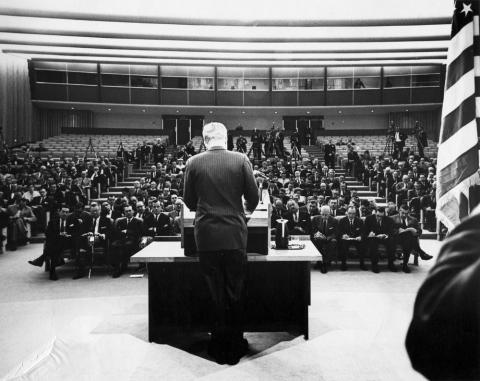