Travel back in time to the early 1960s for an engaging, interactive look at one of the most important times in American history. Family-friendly docent-led Highlights Tours of the Museum's exhibits are free with admission. The items you'll explore include footage from the first televised debate, the rocking chair President Kennedy used in the Oval Office, hand-painted closet doors from Mrs. Kennedy's dressing room, doodles from Cuban Missile Crisis meetings, and a piece of the Berlin Wall.

Stranded at Sea: The PT109 Story

Stranded at Sea is a 25-minute hands-on experience for visitors of all ages. Come hear the story of John F. Kennedy's patrol torpedo boat collision with a Japanese destroyer during World War II, and the crew's six-day struggle for survival. Read Kennedy's letters home describing Navy life, follow the path of the collision and rescue, and see the real coconut message that helped save the crew of PT109.

The Race for Space

The Race for Space Discovery Cart is a drop-in hands-on experience for visitors of all ages. Come explore the first manned American space capsule on display in the Space Exhibit, and follow Astronaut Alan Shepard from takeoff to splashdown. Perform important space duties such as steering the capsule, looking through a periscope and reporting your findings to mission control.

Go beyond the First Lady's image as a fashion icon and dig deeper into her work on the White House restoration project and her role as a cultural ambassador, at home and around the world.  Discover the many (sometimes unusual) places historical items were found during the restoration treasure hunt began. Learn about the cultural symbolism behind Mrs. Kennedy's state clothes.

View our calendar for tour and cart program schedules. Please note that programs are subject to docent availability; last-minute cancellations may occur. 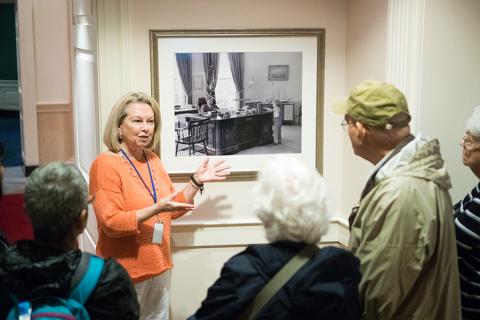 View the dates and times for upcoming walk-in Museum Programs.