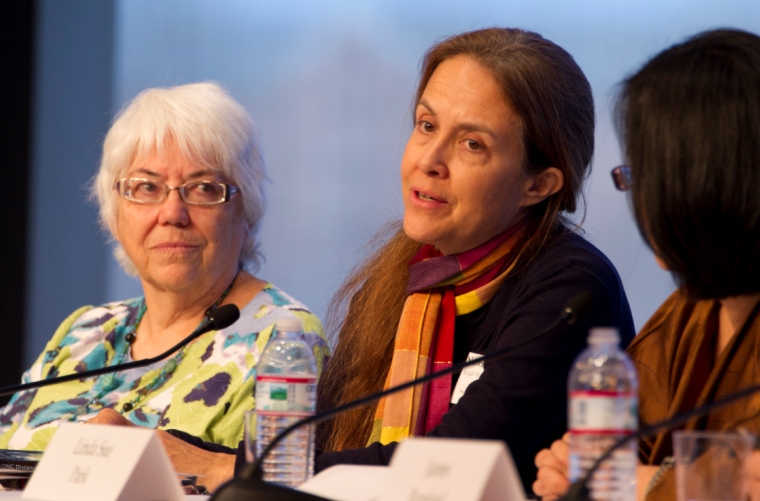 Naomi Shihab Nye reflects on the concept of "borders" during an authors' panel at Crossing Borders through Literature, Poetry and Personal Stories.

About the author: Naomi Shihab Nye describes herself as a “wandering poet.” Drawing on her Palestinian-American heritage, the cultural diversity of her community in Texas, and her experiences traveling in Asia, Europe, Mexico, Central and South America and the Middle East, she uses her writing to attest to our shared humanity. Naomi Shihab Nye is the author and/or editor of more than 25 volumes, including: This Same Sky; What Have You Lost?; Honeybee; and 19 Varieties of Gazelle: Poems of the Middle East (National Book Award finalist); Sitti’s Secrets (a picture book); and Habibi (a young adult novel). She has also been featured on several NPR and PBS programs, including “The Language of Life with Bill Moyers.”

I’m always interested in discussing how kids of all ages have a much stronger instinct for connection than separation. And this is often coming up in response to books but just in classroom situations.

So many kids have said to me in response to a book Sitti’s Secrets that has a Palestinian grandmother in it: “She’s exactly like my grandmother.” And they never say, you know, "She's not wearing the same clothes, exactly," or "that language coming out of her mouth doesn't look like what my grandmother speaks." They're always saying, no, "My grandmother loves plants, we pick plants, she likes to look at the sky," all of these connections that they make. They never say, "'I’m different from that person." They say, "I’m like that person."

And in the letter about peace that the girl writes in the book, kids often want to talk about letters they’ve written that they felt were somehow bigger than they were, or scared them to write, but they had to write them anyway. Not one kid has ever said to me, “She’s not like my grandma."  They've said, "She is my grandma," which suggests to me that impulse toward connection. We want to be closer to one another, not farther apart.