Life of Jacqueline B. Kennedy

Jacqueline Lee Bouvier was born on July 28, 1929, in Southampton, New York. Her father, John, was a wealthy stockbroker on Wall Street whose family had come from France in the early 1800s. Her mother, Janet, had ancestors from Ireland and England.

Janet Bouvier was an accomplished rider, and Jackie was only a year old when her mother first put her on a horse. By age 11, she had already won several national championships. The New York Times wrote in 1940:

Jacqueline Bouvier, an eleven-year-old equestrienne from East Hampton, Long Island, scored a double victory in the horsemanship competition. Miss Bouvier achieved a rare distinction. The occasions are few when a young rider wins both contests in the same show.

Jackie also enjoyed reading. Before she started school, she had read all the children’s books on her bookshelves. Her heroes were Mowgli from Rudyard Kipling's The Jungle Book, Robin Hood, Little Lord Fauntleroy’s grandfather, Scarlett O'Hara from Gone With the Wind, and the poet Byron. Mrs. Bouvier wondered if Jackie might one day be a writer.

After kindergarten, Jackie started first grade at Miss Chapin’s School on East End Avenue in New York. One of her teachers, Miss Platt, thought Jackie was "a darling child, the prettiest little girl, very clever, very artistic, and full of the devil." At times she did get into mischief and would be sent to the headmistress, Miss Ethel Stringfellow, who wrote on her report card: "Jacqueline was given a D in Form because her disturbing conduct in her geography class made it necessary to exclude her from the room."

When Jackie was ten years old, her parents divorced. It was a difficult period for her, especially because at the time few children had divorced parents. She also came from a Catholic family, and the Catholic Church disapproves of divorces. Jackie had always been a private person, but now she became still quieter, keeping her thoughts to herself. 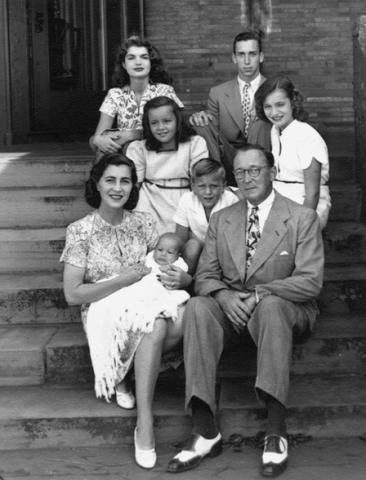 Despite these hard times, Jackie had many advantages and opportunities in life. She took classical ballet lessons in the old Metropolitan Opera House. She began taking lessons in French. In 1942, when Jackie was about to turn thirteen, her mother married a businessman named Hugh Auchincloss who had children from previous marriages. Besides her younger sister, Lee, Jackie now had two stepbrothers, Yusha and Tommy, and a stepsister, Nina.

In June 1947, Jackie graduated from Miss Porter’s School, a boarding school for girls in Connecticut. She continued her education at Vassar College in New York, where she studied history, literature, art, and French. Jackie spent her junior year studying abroad in Paris, France. She lived with the de Renty family at 76 Avenue Mozart. Madame de Renty had two daughters, Claude and Ghislaine, and one four-year-old son, Christian. Jackie later wrote about her experience:

I loved it more than any year of my life. Being away from home gave me a chance to look at myself with a jaundiced eye. I learned not to be ashamed of a real hunger for knowledge, something I had always tried to hide, and I came home glad to start in here again but with a love for Europe that I am afraid will never leave me.

She returned to the United States to finish up her last year of college, transferring from Vassar College to The George Washington University because she preferred being in the city and close to her family.

Jacqueline started her first job in the fall of 1951 as the "Inquiring Camera Girl" for the Washington Times-Herald newspaper. Roving around the city, she took pictures of people she encountered, asked them questions on the issues of the day, and wove their answers into her newspaper column. Among those she interviewed for her column was Richard M. Nixon. She also covered the first inauguration of Dwight D. Eisenhower and the coronation of Queen Elizabeth II. 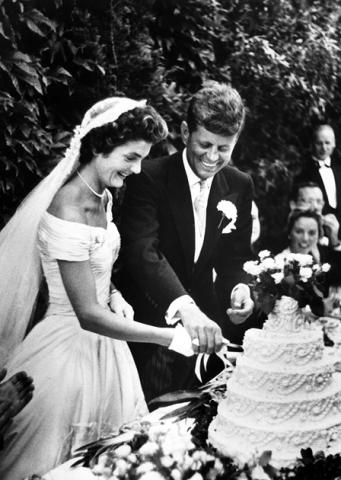 During this time, Jacqueline met John F. Kennedy, who was a congressman and soon to be elected senator from Massachusetts. On September 12, 1953, they married at St. Mary’s Church in Newport, Rhode Island. After their honeymoon in Mexico, the Kennedys returned to Washington DC. Early on in their marriage, Senator Kennedy suffered crippling pain in his back from football and wartime injuries and had two operations. While recovering from surgery, Mrs. Kennedy encouraged him to write a book about several US senators who had risked their careers to fight for the things they believed in. The book, called Profiles in Courage, was awarded the Pulitzer Prize for biography in 1957. That same year, the Kennedys’ first child, Caroline, was born.

In January 1960, Senator John F. Kennedy announced his candidacy for the presidency of the United States. He began traveling all around the country and Jacqueline often accompanied him. During the campaign, she learned that she was pregnant and her doctors instructed her to remain at home. From there, she answered hundreds of campaign letters, taped TV commercials, gave interviews, and wrote a weekly newspaper column, "Campaign Wife," which was distributed across the country. On November 8, 1960, John F. Kennedy beat Republican Richard M. Nixon in a very close race. Two and-a-half weeks later, Mrs. Kennedy gave birth to their second child, John Fitzgerald Kennedy Jr.

On January 20, 1961, John Fitzgerald Kennedy took the oath of office to become the nation's 35th president. At age 31, Jacqueline Kennedy was the first lady. With her gracious personal style and her passion for history and the arts, she worked hard to be worthy of her new role. While she had a deep sense of obligation to her country, her first priorities were to be a good wife to her husband and mother to her children. She told a reporter that "if you bungle raising your children, I don't think whatever else you do well matters very much." 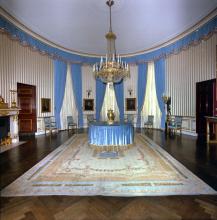 Mrs. Kennedy also thought about what the White House represented to its many visitors and to citizens everywhere. She wanted people to have a greater appreciation of the history of America's most famous residence and its past inhabitants. Her first major project as first lady was to restore and preserve the White House. She enlisted the aid of many experts, established a White House Fine Arts Committee, and created the post of White House curator. Gathering outstanding examples of American art and furniture from around the United States (including many items that had belonged to former presidents and their families), she restored all the public rooms in the White House. CBS Television asked Mrs. Kennedy to present a televised tour of the newly restored White House. Eighty million Americans watched the broadcast, and it earned Jacqueline Kennedy an honorary Emmy Award.

The Kennedys brought a new, youthful spirit to the White House, which they believed should be a place to celebrate American history, culture, and achievement. As first lady, Jacqueline Kennedy planned important dinners and events at the White House and invited artists, writers, scientists, poets, and musicians to mingle with politicians, diplomats, and statesmen. After a visit to the White House, the world-renowned violinist Isaac Stern wrote to Mrs. Kennedy to thank her. "It would be difficult to tell you," he wrote, "how refreshing, how heartening it is to find such serious attention and respect for the arts in the White House. To many of us it is one of the most exciting developments on the present American cultural scene." Mrs. Kennedy also influenced the world of fashion. Her unique and refined sense of style made her a trendsetter, although she discouraged the excessive focus on her appearance by magazines, newspapers, and the general public.

Ambassador of Good Will 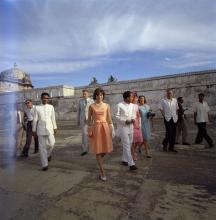 Mrs. Kennedy also traveled with her husband, representing the United States abroad. Clark Clifford, a respected lawyer and advisor to President Kennedy, was so pleased with Mrs. Kennedy after her trip to Paris, Vienna, and Greece that he sent her a note of appreciation, "Once in a great while, an individual will capture the imagination of people all over the world. You have done this; and what is more important, through your graciousness and tact, you have transformed this rare accomplishment into an incredibly important asset to this nation."

As first lady, Mrs. Kennedy also traveled to Italy, India, and Pakistan. Her interest in other cultures and her ability to speak several foreign languages, including French, Spanish, and Italian, brought her good will and admiration around the world.

A Time of Loss 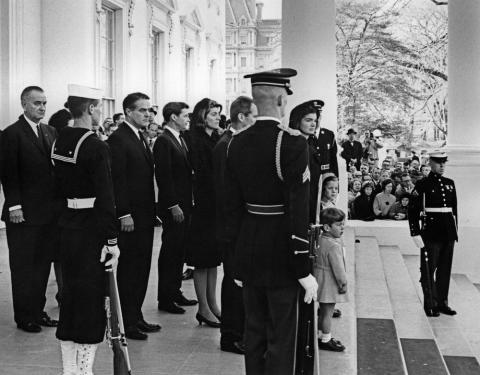 On August 7, 1963, Mrs. Kennedy gave birth to their third child, Patrick Bouvier Kennedy. He suffered from a serious lung ailment and was rushed to the Children's Hospital in Boston, where he died two days later. While still recovering from this loss, another terrible tragedy befell her. On November 22, 1963, President and Mrs. Kennedy were in Dallas, Texas. As their car drove slowly past cheering crowds, shots rang out. President Kennedy was killed and Jacqueline Kennedy became a widow at age 34. She planned the president's state funeral. As it was broadcast around the world, millions of people shared her grief and admired her courage and dignity.

Soon after President Kennedy’s death, Mrs. Kennedy began the work of creating the John F. Kennedy Presidential Library and Museum as a memorial to her husband. She chose the architect I.M. Pei to design the building, which now stands as a landmark overlooking Boston Harbor.

In 1968, Jacqueline Kennedy married a Greek shipping magnate Aristotle Onassis. When Mr. Onassis died in 1975, she became a widow a second time. Now that her children were older, Jacqueline decided to begin a new career. She accepted a job as an editor at Viking Press in New York City and later moved to Doubleday as a senior editor. She enjoyed a successful career in publishing until her death on May 19, 1994. Jacqueline Bouvier Kennedy Onassis was laid to rest beside President Kennedy in Arlington National Cemetery outside Washington, DC.

The Legacy of Jacqueline Bouvier Kennedy

Throughout her life, Jacqueline Kennedy sought to preserve and protect America’s cultural heritage. The results of her work are still visible in Lafayette Square, across from the White House in Washington, DC. While she was first lady, she helped to stop the destruction of historic buildings along the square, including the Renwick Building, now part of the Smithsonian Institution. In New York City, she led a campaign to save and renovate Grand Central Station. Today, more than 500,000 people pass through each day and enjoy its restored beauty, thanks to her efforts.

Jacqueline Kennedy captivated the nation and the rest of the world with her intelligence, beauty, and grace. With a deep sense of devotion to her family and country, she dedicated herself to raising her children and to making the world a better place through art, literature, and a respect for history and public service.