If you are elected to the nation's highest office, what are you actually expected to do? Spend a day at the White House with John F. Kennedy to learn about some of the president's most important roles and responsibilities.

Topic: The Job of the President

The functions of the executive branch and the various roles of the president may be somewhat abstract to students in middle grades. This lesson provides them with concrete examples as they examine one long and varied day in President Kennedy’s life—September 25, 1962. On this day they can see the president performing specific roles, such as Party Leader, Head of State, Head of the Executive Branch, Commander-in-Chief, and Moral Leader. Students also review what the Constitution has to say about the president’s job, consider how it has changed over the years, and collect additional information on the presidency today based on current news sources. Finally, after collaborating on a “help wanted” ad for the job of president, they write personal essays on what the job means to them.

What roles, responsibilities and daily activities are part of a modern president’s job?

For all its significance to the nation and the world, the position of president of the United States has a remarkably brief job description—Article II, Section 2 and 3 of the US Constitution easily fits on a single typed page. And while the country has gone through unimaginable changes since George Washington’s day, and the Constitution itself has been amended many times, the words describing the president’s powers and duties remain exactly as they were written in 1787. Those words, however, do not fully reflect the many unwritten obligations and new roles that more recent occupants of the Oval Office have been expected to fulfill.

As the first president to be born in the 20th century and to appear regularly on TV, who steered the country into the space age and away from the precipice of a nuclear war, John F. Kennedy helped to define the modern presidency. Half a century later, even as the pace of technological, political and social change continues to accelerate, a day at work in the Oval Office is not so different from what it was when JFK presided over the New Frontier.

Materials (all included in the downloadable pdf)

1. Preliminary discussion: Point out to the class that just as they follow a daily schedule in school, the president of the United States has a schedule too, although it may vary a great deal from day to day.

Ask: What are some things a president might do as part of a day’s work? Write down responses on the blackboard. After students generate a list, explain to them that they will be comparing their ideas with a particular day in the life of one of our presidents.

2. Read article: Have students take turns reading aloud from A President’s Day handout. They should also have a copy of JFK’s official schedule for September 25, 1962 to refer to as they read. Explain that this list of President Kennedy’s appointments was typed up by his secretary and left on his desk at the beginning of the day. However, things seldom go exactly according to plan, even for the president. Ask students to take note of the actual times he spent at each meeting or event (which are shown next to the photographs) and compare with the original schedule. Pause to discuss the pictures and any unfamiliar vocabulary words. You may also wish to record students’ observations and questions related to each of the day’s events. (Note: The questions in the article may be used to extend the lesson, as suggested below.)

3. Compare the initial list with President Kennedy’s day: Review what was written on the board in the preliminary discussion and check off those things that JFK actually did. Then have students name the roles and responsibilities described in the article and ask if any of these were mentioned earlier. If not, add to the list.

4. Consider other possible daily activities: Point out that along with the various meetings, appointments and events on his schedule the president would have spent time on a number of other daily activities. Ask students: What’s missing from our list? For example, do you think President Kennedy had any phone calls related to his work? And what about the mail? Every day, hundreds and sometimes thousands of letters arrive at the White House addressed to the president. When could he have taken time for reading and answering his correspondence? See what other ideas come from the class and record them.

Students are likely to mention things that are not exactly part of the job, but worth noting. The president would have had another couple of meals in addition to his working breakfast. Did he have them with his family? Could he have taken time to play with the children? He might have read the papers, listened to news on the radio or watched television. (A heavyweight championship fight was on TV that night and he was always interested in sports.) He also needed exercise—a daily swim in the White House pool helped to relieve the back pain he suffered from his war-time injury. When could he have found time for this? If they don’t bring it up themselves, ask students if they think presidents ever take naps during the day. In fact, JFK did take a short one that afternoon. The book, Johnny, We Hardly Knew Ye by David F. Powers and Kenneth O’Donnell includes this information and other interesting anecdotes concerning September 25, 1962 (p. 257-67) and you may wish to share some more of these details with your class.

5. Review what’s written about the presidency in the US Constitution: Have students read The President’s Job According to the Constitution (which summarizes ten powers and duties described in Article II, Sections 2 and 3). Ask them to identify which ones were carried out by JFK on September 25, 1962. The others can be added to the list.

6. Reflect on what has and what hasn’t changed about the president’s job: Ask students how the job of president might have changed from George Washington’s time to when John F. Kennedy was in the White House. What was different about the country and the world when that “job description” in the Constitution was written? What were some things that were part of a day’s work for President Kennedy that President Washington could have done too? What were some things that would have been new and unfamiliar to George Washington? Record students’ responses on the board.

7. Collect evidence about the president’s job today: As a homework assignment, ask each student to collect examples of three different roles or responsibilities the president has been fulfilling during the past week, and to bring in their evidence (e.g., newspaper headlines, clippings of articles, printouts from the White House website). Use their findings to create a bulletin board display. Have the class look at the display and ask them if it reflects any further changes in the job since the time John F. Kennedy was president in the 1960s. Add any new items to the previous list.

8. Write a “help wanted” ad for the job of president: Point out to students that they now have a lot of specific information and ideas about the president’s duties. Ask them to imagine that they belong to a citizens’ group concerned about getting the most capable candidates to run for president, and they’ve decided to write an ad to put in newspapers, billboards, and on the internet as a way of publicizing their effort. Divide students into teams and ask them to write a “help wanted” ad listing the chief executive’s key roles and responsibilities. Then ask everyone to vote for the one they think best describes the job.

Ask students if the job of president has any appeal to them, and whether they could conceive of running for the office themselves one day. Why or why not? After time for class discussion, have students write a brief personal essay responding to these questions: Which parts of the job do you think would be most challenging? Which do you think would be most rewarding? Which aspects of the job do you see as most significant?

1. Discuss questions included in “A President’s Day” relating to the roles described in the article:

Party Leader (p.2): “Burro” is another name for donkey. Why does the donkey stand for the Democratic Party and the elephant for the Republican Party? (Do some research to find out.)

Head of State (p. 3): JFK believed that cultural exchanges were a good way to improve relations between countries. Can you think of other ways to do this?

Head of the Executive Branch (p.4): What qualities do you think a president should look for in choosing cabinet members?

Commander-in-Chief (p.5): Do you believe it’s necessary for a president to have been in the military to be a good commander-in-chief? Why or why not?

Moral leadership (p. 6): If you were president, what injustices in our country would you want to fight against? What good causes would you most want to support?

Alternatively, ask students to respond individually as part of a homework assignment.

2. Ask students to imagine that at the end of this very long day, despite the lateness of the hour, President Kennedy pauses quietly before the portrait of George Washington in the East Room (the painting that was saved by Dolley Madison when British soldiers set fire to the White House in 1814). As he gazes at his predecessor’s picture, JFK wishes he could have a conversation with President Washington about some of the things that have been on his mind today. If you were President Kennedy, which of the day’s activities would you most want to talk about with George Washington? What do you think Washington might have to say about it, and what questions might he ask? Write an imaginary dialogue between the two Presidents.

All of President Kennedy’s daily schedules can be found on the Library’s website, in The White House Diary under Interactive Exhibits. Choose one or more of these schedules and have students compare with September 25, 1962.

What the President Does All Day by Roy Hoopes is a children’s book featuring photos of President Kennedy at work. It was originally published in 1962 and was re-issued by HarperCollins in 1974. The book is currently out of print but you may be able to locate a copy in your local library. 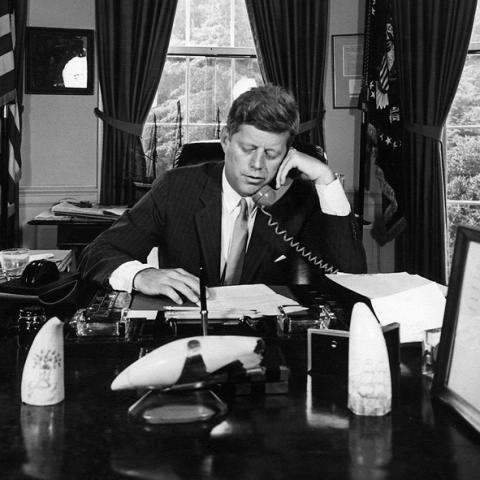