They Had a Dream

After investigating primary source material on the March on Washington, students put themselves in the role of a civil rights leader and write a letter to President Kennedy.

Many students know that Dr. Martin Luther King Jr. gave his historic speech on August 28, 1963, at the march on Washington for Jobs and Freedom. But they may not realize that the leaders of the March arranged to meet with President Kennedy in the White House on the day of the March. In this activity, students act as historians as they analyze a photograph taken at that meeting and reflect on the significance of the March. They then take on the role of a civil rights leader as they write a letter to President Kennedy requesting to have a meeting on the day of the March on Washington.

How can primary sources such as photographs and letters help us to understand the past?

Students should have basic knowledge about the civil rights movement. They should be familiar with different types of letters, specifically, business letters.

The struggle for equal rights began many decades before John F. Kennedy became President. When he took office, public places in the South such as playgrounds, amusement parks, and stores had signs that said “white only.” There were movie theaters, bus stations, and restaurants that had separate sections for black people. Bathrooms and water fountains were labeled “White” or “Colored.” The facilities for white people were often newer and nicely kept while the facilities for black people were not well maintained. Local and state government officials enforced segregation.

Before and during Kennedy’s presidency, a growing number of people, black and white, young and old, wanted to end segregation and used civil disobedience and non-violent actions to challenge discrimination. Martin Luther King Jr. and other civil rights leaders, led thousands of people to organize protests, sit-ins, boycotts, and other actions to make it known that they were not willing to accept unfair treatment any longer. In an effort to galvanize the movement, leaders from difference civil rights organizations joined forces to plan a massive peaceful protest that would take place on August 28, 1963, in the nation’s capital. They hoped that the March on Washington for Jobs and Freedom would help achieve the goal of equal rights and economic justice for all Americans.

In response to mass arrests of protesters and increasing violence, President Kennedy took a strong stand in support of equal rights. On June 11, 1963, President Kennedy spoke to the nation in a Television and Radio Report to the American People on Civil Rights, laying out his position on civil rights. He passionately articulated why segregation was morally wrong and advocated for a civil rights act that would make segregation illegal.

Eleven days later, civil rights leaders, including those planning the march, met with President Kennedy and informed him of their plans to organize a national demonstration. The President was reluctant to support their efforts. He was determined to pass the Civil Rights Act and knew it was not going to be easy. He had to convince enough legislators to support the law, and many continued to support segregation. President Kennedy was concerned that a large-scale protest might make it more difficult to pass the landmark legislation. What if the protest turned violent? Would the March further polarize the country, making lawmakers who supported segregation more adamant about their position?

In response to his concerns, A. Philip Randolph, the director of the march, explained that “the black masses were restless” and that they could not stop them from demonstrating their opposition to segregation. President Kennedy, eager to make sure the event was peaceful and safe, provided behind-the-scenes government support for the project.

On August 28, 1963, over 250,000 people from across the nation traveled by bus, train, plane, car, bicycle, and even roller skates to attend the March. After rousing songs, heartfelt prayers, and inspirational speeches by nine other civil rights leaders, Martin Luther King Jr., addressed a sweltering but energized crowd in the afternoon heat. The event exceeded all expectations; it was a powerful and peaceful demonstration for equality and justice. Following the event, civil rights leaders met with President Kennedy.

The photograph provided was taken at this meeting which occurred in the Oval Office in the White House on August 28, 1963, a few hours after Dr. Martin Luther King Jr. proclaimed, “I have a dream.” The photograph shows President Kennedy, Vice-President Johnson, and Secretary of Labor Willard Wirtz meeting with the leaders of the March on Washington for Jobs and Freedom, the group known as the “Top Ten.”. When the group entered the Oval Office, President Kennedy gave each of them his heartfelt congratulations on organizing such an inspiring event. There was, however, some tension at the meeting. The leaders wanted to push President Kennedy to make his proposed Civil Rights Act stronger, to help end discrimination in jobs and education. The Civil Rights Act that became law in July 1964, eight months after President Kennedy’s death, did not include all of the leaders’ demands, but it was an important step in ending segregation.

Lead a discussion about the civil rights movement drawing on students’ prior knowledge of leaders, events, and the goals of the movement. You may make a “web” of student responses on chart paper or record ideas on a list.

Writing a Letter to President Kennedy

Note: A. Philip Randolph originally requested a 10:30 am meeting. Meeting before the March would enable the leaders to announce to the crowds that they had met with President Kennedy that morning and report on his response to their demands for equal rights, jobs, and education. Special Assistant to the President, Kenneth O’Donnell, responded to Randolph’s letter, fixing the appointment at 5 pm, after the March. Perhaps President Kennedy wanted to make sure the March was successful and peaceful before meeting with the leaders. As it turned out, the March was a great success and President Kennedy gave the leaders his heartfelt congratulations when they arrived in the Oval Office. At the meeting, however, the leaders made it clear to the President that they wanted to see a strong law passed to help end discrimination in jobs and education.

Have students write “text bubbles” for A. Philip Randolph, Martin Luther King Jr., and President Kennedy, to add to a copy of the photograph. The text should reflect what each person might be thinking at the moment the photograph was taken, based on the information gained in the lesson.

Provide students with a letter template to help organize their content and format.

National Standards for Civics and Government:

They Had a Dream Full Lesson Plan 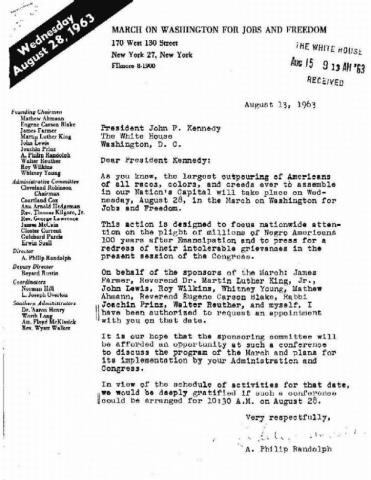 Letter from A. Philip Randolph to JFK

Photograph of the “Top Ten” meeting with President Kennedy