Why Choose the Moon?

Goals/Rationale: Students will examine President Kennedy’s 1961 decision to send a man to the Moon by reading a letter written to the president by 13-year-old Mary Lou Reitler. Students will consider arguments in support of and opposition to using federal funds for space exploration both in the context of 1961 and the current debate on funding for NASA.

Essential Question: How much money should the federal government devote to space exploration?

Students should have general background knowledge of Cold War tensions between the United States and the Soviet Union.

On May 25, 1961, President John F. Kennedy made a special address to Congress on Urgent National Needs and asked Congress to dedicate $7-9 billion dollars to the space program. The United States, he declared, needed “to take a clearly leading role in space achievement” and “commit itself to achieving the goal, before this decade is out, of landing a man on the Moon and returning him safely to the earth.” The mission was clear: the United States must go to the Moon.

President Kennedy made this request one month after the Soviet Union had sent the first man into space. The Soviet success suggested that the United States was falling behind in the arms race and fueled new tensions between the two nations entwined in a bitter Cold War. Space was the latest theater for battling the Cold War and provided an opportunity for the United States to promote leadership and demonstrate the technological advances of a free and democratic society. In order to do that, the United States needed to reach the Moon before the Soviet Union.

To achieve this end, Congress appropriated the funding for NASA’s Apollo lunar landing program. It took eight years of work and sacrifice, including the loss of three astronauts in a fire aboard Apollo 1, but President Kennedy’s goal was finally achieved on July 20, 1969 when Neil Armstrong and Buzz Aldrin became the first men to walk on the Moon as part of the Apollo 11 mission.

From the very moment President Kennedy made his intentions clear, people began to debate the necessity of space exploration. The wonders of exploring the unknown and promise of potentially life-altering technological advances were tempered by thoughts that life would be most improved by focusing on immediate concerns on earth such as the struggle for civil rights, domestic anti-poverty programs, and, as time went on, increasing US involvement in Vietnam.

This lesson examines the public debate over the space program through the eyes of a 13-year-old girl. In 1962, eighth grader Mary Lou Reitler wrote a letter to President Kennedy articulating her opposition to the space program. Although President Kennedy did not personally respond to her letter, Myer Feldman, the Deputy Special Counsel to the President, wrote back, addressing Ms. Reitler’s concerns and detailing the president’s views on the importance of space exploration. Through their analysis of these letters and additional information about the costs and benefits related to the Apollo program, students will consider the merits of federally funded space exploration and take a position in support of or in opposition to President Kennedy’s decision to go to the Moon. This lesson includes an extension where students can also examine the current debate on space policy in relation to the 1960s.

This lesson uses a letter written by 13-year-old Mary Lou Reitler to President Kennedy, and the White House’s response, to examine some of the reasons given in support of and in opposition to President Kennedy’s decision to send a man to the Moon. Students use these letters, as well as additional information on the space program, to construct their own position on federally funded space exploration. This lesson consists of three parts and an assessment.

Part III: Debating the Decision to Go to the Moon

Have a class discussion about the pros and cons of space exploration. You may want students to consider the following questions:

This assessment can be done in class, as a homework assignment, or modified as an “exit ticket.” Students should complete the following writing prompt:

It is May 1961 and you are a member of Congress. Write a statement to your constituents about your position on President Kennedy’s decision to send a man to the Moon. In your statement, tell your voters if you plan to support or oppose President Kennedy’s request to give more money to NASA and explain your position on space exploration. Use the letters written by Mary Lou Reitler and Myer Feldman, as well as the ideas you brainstormed and any additional information, to support your position.

As President Kennedy’s speech at Rice University suggests, the decision to go to the Moon and the space program were motivated, in part, by the Cold War tensions between the United States and the Soviet Union. Have students conduct further research on this topic to consider the impact of the Cold War on the space program.

National Archives and Records Administration
This NARA web page provides links to information about the United States’ spaceflight programs, including NASA missions and the astronauts who have participated in the efforts to explore space. 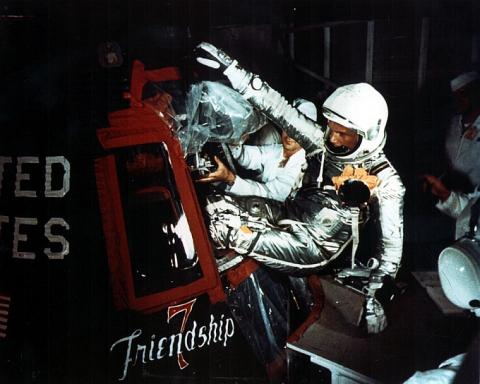 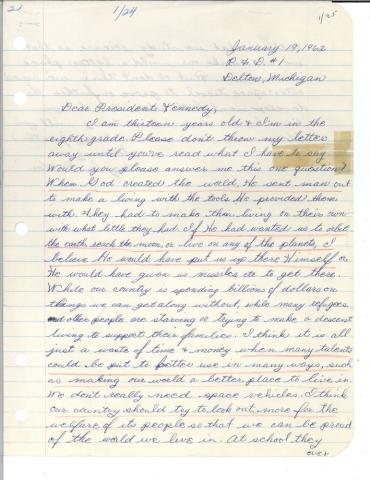