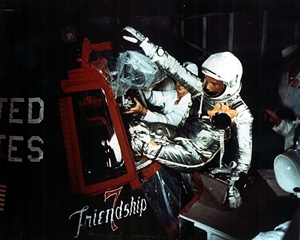 Against the backdrop of the Cold War conflict, a new kind of rivalry took shape in the early 1960s between the United States and the Soviet Union. The Russians appeared to be ahead in the so-called "race for space" as they followed their launching of the first satellite, Sputnik, in 1957 with the history-making flight of cosmonaut Yuri Gagarin in April 1961. The following month, Alan Shepard became the first US astronaut in space in a fifteen-minute sub-orbital flight. Three weeks later, President Kennedy called for the landing of an American on the moon by the end of the decade as he sought a major mobilization of the nation's resources to catch up with and surpass the USSR in the space race. By February 20, 1962, when John Glenn returned safely after orbiting the earth three times aboard Friendship 7, the US space program clearly had moved into high gear.

The following materials, resources, and activities will help you explore this topic:

Now try to answer these questions: The Space Race

Special Message to Congress on Urgent National Needs, May 25, 1961
Read and listen to an excerpt of President Kennedy's speech in which he establishes the goal of landing a man on the moon and returning him safely to the earth.