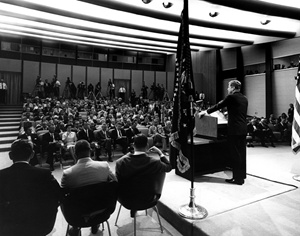 Although presidential press relations date back to George Washington, the emergence of television fundamentally changed presidential relations with the press. President Eisenhower was the first to permit television equipment to record press conferences. James C. Hagerty, Eisenhower's Press Secretary, edited the films from these conferences before releasing them to the public.. 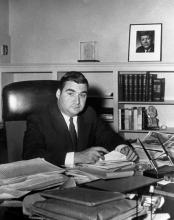 The press secretary's central role continued in the Kennedy administration. Kennedy’s press secretary, Pierre Salinger, was “responsible for the flow of news not only from the president’s office, but from the entire executive branch of government.”[2] One of Salinger’s responsibilities was to prepare the president for his televised press conferences, which the president gave, on average, every 16 days. This is how he describes the preparation for these events:

Our briefing procedure… was to agree among ourselves on the twenty or thirty questions the correspondents were most likely to ask the next day. The public information officers had a sharp instinct for what the press was thinking, and I can’t recall a single major area of questioning they didn’t anticipate. For questions in sensitive areas, we would prepare the text of an answer and an up-to-the-minute background briefing.

I would give the material to the president early in the evening and he would study it before going to bed. The next morning, with his top advisers present, we would go through a dry run at breakfast… I would sit directly across the table from JFK and fire the questions at him (between forkfuls of ham and eggs) in the language I thought the press would use. He might reply, “I can handle that one—let’s move on.” But, more often, he would give his answer and then invite comment from the appropriate Cabinet officer or staff member.

There were usually six or eight questions for which he required more facts, and I would start digging them up immediately after breakfast. The president almost always took a nap after lunch to increase his alertness for the press conference, which most often took place at 4 PM. Bundy [Kennedy’s Special Assistant for National Security], Sorensen [Special Counsel and Speechwriter ], and I would wake him around three, and run over the new information with him while he was dressing. The president and I would arrive at the State Department ten minutes before four. Rusk [Secretary of State], State Under Secretary George Ball, and State press officer Manning would be waiting for us in a small room off the auditorium with the latest information off the State Department teletype. There was also a direct telephone line to the White House in case of a major, last-minute news break there.

Exactly at four, the president would stride onto the stage. I would follow, take a chair behind him and to his left, and keep a close watch on the wings in the event a story came over the teletype or telephone that he should announce immediately…” [3]

In the links below, read four briefing papers that Pierre Salinger’s office put together to prepare President Kennedy for his press conferences. 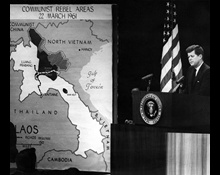 In these papers you will see potential questions that might be asked of Kennedy, information on the topic, and suggested points in reply to the questions. After reading these briefing papers, you may want to view the transcripts from the four press conference dates to see if similar questions had been asked of the president and, if so, how Kennedy responded.