UPDATE: The JFK Library and Museum will begin Phase One of reopening starting July 3, 2021. Visiting hours will be limited to Saturdays and Sundays, 10:00 a.m. to 2:00 p.m. Timed tickets are required, and no walk-ups are permitted. Learn more. 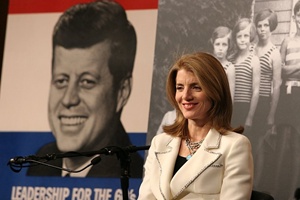 From 2002 – 2011, she was Vice Chair of the Fund for Public Schools, which raised over $280 million to support public school reform and engaged a record number of New Yorkers to volunteer in New York City schools.

Ms. Kennedy is married to Edwin Arthur Schlossberg, president of Edwin Schlossberg Inc., a multi-disciplinary design company that specializes in interactive exhibit design and museum master-planning. They have three children.