Read about upcoming programs, recent projects and events, and download classroom-ready lessons on history and civic education topics. Click on the links below to access pdf copies of current and past issues.

To receive New Frontiers in the mail, please provide your name and mailing address. The John F. Kennedy Presidential Library and Museum does not sell or share any personal information or email addresses.

Issue 33| Fall 2022: This edition includes an elementary and middle school lesson plan about the creation of the Cape Cod National Seashore, resources for teaching and learning about the Cuban Missile Crisis and its lessons for today, the 2022 Profile in Courage Essay Contest winner, and a Collections Corner preview of the 2023 exhibition Service and Sacrifice highlighted by John F. Kennedy's US Navy identification card.

Issue 32| Spring 2022: This edition includes a retrospective on the past twenty years of Federal Budget Simulation programs for high school students, an elementary and middle school lesson plan about a student's petition for peace to President Kennedy, a Collections Corner feature highlighting the recent curatorial updates to the White House restoration exhibit display, and announcements of upcoming professional development opportunities for teachers and school librarians and the National Student Mock Election.

Issue 31| Fall 2021: This edition centers around the launching of the remastered The Presidents’ Desk digital interactive and the accompanying The President's Desk: A Resource Guide for Teachers: Grades 4-12. Lesson plans from the Guide provide a deeper dive into John F. Kennedy’s World War II service in the US Navy and the racial integration of higher education during the Kennedy administration. The Collections Corner features one of the many never-before displayed artifacts from the recently opened exhibition First Children: Caroline and John Jr. in the Kennedy White House, a working model sailboat gifted to John Jr. by Italian President Antonio Segni.

Issue 30 | Spring 2021: This edition centers around the 60th anniversary of the Kennedy administration with photographs highlighting some of the memorable moments and key events of 1961. Lesson plans provide a deeper dive into the efforts of the first Peace Corps volunteers, and a closer look at the role of JFK’s press office and the hot topics covered in his press conferences. A new Collections Corner features some recently digitized pages from one of several notebooks kept by John F. Kennedy containing quotations of notable individuals, notes, and various other writings.

Issue 29 | Fall 2020: A reflection on voting rights and overcoming barriers to voting with lesson plans that spotlight racial discrimination and poll taxes. An invitation to Expanding Democracy: The 19th Amendment and Voting Rights Today, a conference exploring the history of the suffrage movement and how efforts to broaden voting rights have evolved over time in honor of this year’s centennial of the ratification of the 19th Amendment, is accompanied by a feature highlighting some of the many contributions women made to help elect John F. Kennedy to office. A student activity for mapping the upcoming election results and comparing them to election night 1960 is included along with an announcement of new virtual program offerings for schools.

Issue 28 | Summer 2020: A spotlight on the Equal Pay Act of 1963 signed into law by President Kennedy. Two lesson plans for elementary and secondary school audiences examine the legislation and provide correlations to the issue of gender equality today.  Highlights of past Kennedy Library Forums that focused on both the strides made and the remaining challenges in the fight for women’s full participation in our society. Additionally, a special invitation to educators for an upcoming conference commemorating the centennial of the ratification of the 19th Amendment and voting rights issues today, and information on the 2020 National Student/Parent Mock Election.

Issue 27 | Fall 2019: A listing of potential ideas and primary resources for the National History Day (NHD) theme of Breaking Barriers in History, including a lesson plan analyzing a letter advocating for women to be allowed into the Space program in 1963; the 2019 Profile in Courage Essay Contest winner; and highlights from the special programming honoring the 50th anniversary of the Apollo 11 Moon landing at the Kennedy Library.

Issue 26 | Spring 2019: A reflection on the 50th anniversary of the Apollo 11 mission fulfilling President Kennedy's challenge to the nation to land a man on the Moon and return him safely to Earth by the end of the 1960s is complemented with related lesson plans and invitations to upcoming programs in honor of the anniversary.

Issue 25 | Winter 2019: Highlighted resources from the Kennedy Library with a focus on the First Amendment; an elementary and middle school lesson plan about citizen activism during the civil rights movement; an article with guided questions about the Universal Declaration of Human Rights; and the 2018 Profile in Courage Essay Contest winner.

Issue 24 | Spring 2018: Reflections on 1968 including online resources teachers can use related to Dr. Martin Luther King Jr. and Robert F. Kennedy in remembrance of their work and legacies in this the 50th-anniversary year of their assassinations; a high school lesson plan about the televised interviews President Kennedy gave regarding the challenges of Vietnam; and an article about Jacqueline Kennedy’s White House restoration with a related classroom activity for elementary and middle school grade levels.

Issue 23 | Fall 2017: An article highlighting the JFK100: Milestones & Mementos with related lesson plans for each grade level – Centennial highlights and an invitation for the Profiles in Courage Essay Contest for High School Students.

Issue 22 | Fall 2016: An article highlights the 1960 presidential campaign and its relevance to the 2016 election season with lesson plans for televised debates as well as announcements for specialized Centennial educational programming on the horizon - including increased prizes for the Profiles in Courage Essay Contest for High School Students.

Issue 21 | Spring 2016: An article on the Museum's new exhibit exploring the life and work of Ernest Hemingway, complemented by related classroom activities; information about the spring conference for teachers and librarians, the 2016 Profile in Courage Essay Contest winner, a spotlight on student activities, and announcements for election-year programming and resources for teachers and students.

Issue 20 | Winter 2016: Articles on the 60th anniversary of the publication of Profiles in Courage and its legacy, the Museum's new exhibit exploring Kennedy's early life through primary sources, a persuasive letter writing lesson plan for elementary students, and announcements of the upcoming 2016 Spring Conference for educators grades 3-8 and school librarians and Hemingway exhibit.

Issue 19 | Spring 2015: An article on the US involvement in Vietnam including a lesson plan for high school students, a 1965 Department of Justice map marking voting rights violations in the South with suggestions for classroom discussion, a tribute to children's author Walter Dean Myers, and articles on the newly updated Museum's featured interactives and a new iPad app for children.

Issue 18 | Fall 2014: An article with suggested activities on the Voting Rights Act, a lesson plan for reenacting the March on Washington, information and an activity about the Library's exhibit on the Cuban Missile Crisis, an announcement about four Kennedy Library programs at the 2014 NCSS conference, and a lesson plan on art as a civic language.

Issue 17 | Fall 2012: An article about the Cuban Missile Crisis, including a lesson plan and web resources, and information about a related conference and traveling exhibit; and a lesson plan on campaigns and elections.

Issue 16 Spring 2012: An article about the TAH seminar Voices from the Past; in conjunction with the 50th anniversary of John Glenn's orbital flight, a lesson plan for middle and high school students incorporating a letter about the space program; a list of lesson plans for all grade levels in the Curricular Resources section of our website that use letters as primary sources; recaps of The Presidency and Civil Rights Conference and the Federal Budget Simulation Program for high school students.

Issue 15 | Fall 2011: An article about the newly unsealed Jacqueline Kennedy oral history, strategies for how to use Oral Histories and how to explore the Digital Archives in the classroom, an article on The President's Desk interactive microsite and Resource Guide for Teachers, a recap of Crossing Borders teacher conference, and a spotlight on student awards and activities at the Library.

Issue 14 | Winter 2011: A message from Caroline Kennedy, articles on the 50th anniversaries of JFK's Inauguration and the founding of the Peace Corps, a classroom activity for high school students, articles on the debut of www.JFK50.org and the digital archives at jfklibrary.org, and information on our upcoming teacher conference, Crossing Borders: Through Literature, Poetry and Personal Stories.

Issue 12 | Spring 2010: An article about the special exhibit Winning West Virginia, activities for using the Kennedy presidential campaign on Twitter in the classroom, and an excerpt from the 2010 Profiles in Courage Essay Contest winning entry.

Issue 10 | Winter 2009: Classroom lesson plans related to the Inauguration of John F. Kennedy for elementary, middle, and high school grades; and articles about the National Student/Parent Mock Election and a Boston Public School teacher who uses the Library with his students.

Issue 8 | Winter 2008: Articles about the special exhibit, Shaping Up America: John F. Kennedy, Sports and the Call to Physical Fitness, and the Cuban Missile Crisis teacher conference; and resources for evaluating biographies with children.

Issue 7 | Spring 2007: Articles about Kennedy Library professional development, including the teacher conference, One Country, Many Voices: Cultural Connections to Our History and the Teaching American History grant-funded Cold War institute; and articles about the Election-Year Debate Program and Federal Budget Simulation Program for high school students; and an activity using a photograph to learn about a young JFK. 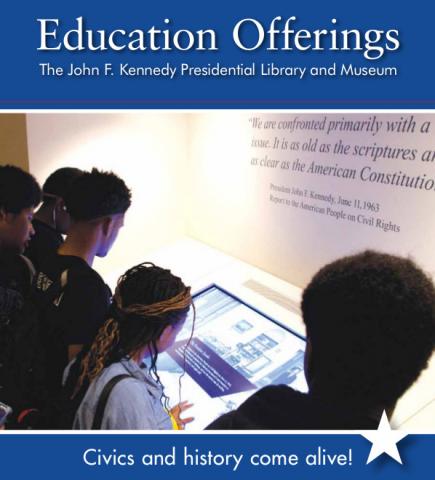 Explore these Education Offerings that foster livelong learning from the education and public programs department.