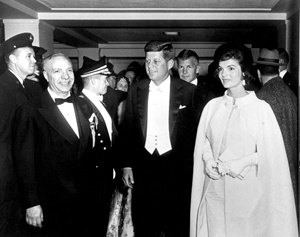 This exhibit highlights Jacqueline Kennedy’s early life, as well as her substantive achievements as First Lady. Her contributions to the field of historic preservation, her advocacy for the arts, and her role as an effective cultural ambassador are illustrated in this exhibit, which includes an interactive screen focusing on Jacqueline Kennedy's work as First Lady, highlighting other items from the collection not currently on display.

On January 20, 1961, John Fitzgerald Kennedy took the oath of office to become the nation's 35th President. At age thirty-one, Jacqueline Bouvier Kennedy had become the third youngest First Lady in our history. With her gracious personal style and her passion for history and the arts she worked hard to be worthy of her new role. Her first major project was the historical restoration of the White House. She created a White House Fine Arts Committee to guide and authenticate the work, created the White House Historical Society, the post of White House curator, oversaw publication of a guidebook for visitors, and established the White House Library and the Rose Garden. Once Mrs. Kennedy's restoration of the White House was nearly complete, she hosted a television TV tour broadcasted by CBS to more than 50 million Americans in February of 1962, the video of the White House tour is part of the exhibit.

First Lady Jacqueline Kennedy also accompanied her husband on state visits to Canada, Puerto Rico, France, Austria, the United Kingdom, Venezuela, Mexico, Costa Rica, and Columbia. She also traveled to Pakistan and India. Her interest in the cultures of the countries she visited and her fluency in languages made her a popular around the world. A selection of the dresses worn during these state visits are on display.

Photograph of Senator John F. Kennedy and Jacqueline Sailing on the 'Victura'

Photograph of Senator John F. Kennedy and his fiancée Jacqueline Bouvier sailing the Victura on the waters off the coast of Hyannis Port, Massachusetts.

Bequest of the Estate of President John F. Kennedy

Camera Jacqueline Bouvier used as the $42.50-per-week reporter and photographer for the Washington Times-Herald. She began work as "The Inquiring Camera Girl" for the paper in 1952 at the age of 23, roving the city to capture people's opinions on a variety of topics. The young reporter used this camera to photograph those she interviewed. An April 1953 installment of her column featured Senator John F. Kennedy and Vice President Richard M. Nixon.

To avoid the politically controversial use of public money for the restoration of the White House State rooms, Mrs. Kennedy established the White House Historical Association which would publish the first official White House Guidebook in 1962. All profits from the sale of the guidebook to the millions who toured the White House would be used to fund the restoration project and to purchase the furnishings and other historic materials located by the Fine Arts Committee. Together with the newly appointed White House Curator (a position whose creation Mrs. Kennedy championed), Mrs. Kennedy approved the guidebook's text, chose which photographs would be featured, and designed the book's layout. Upon publication, it became an immediate success.

In 1961 Jacqueline Kennedy appointed a Fine Arts Committee to restore the interiors of the White House. The committee was chaired by Henry Francis du Pont, the nation's leading collector of American antiques. To help with the interior design, First Lady Jacqueline Kennedy hired Stephane Boudin, a French designer with the Maison Jansen decorating firm.

When the work was complete she commissioned artist Edward Lehman to create a series of watercolors of the restored White House interiors.  She had admired Lehman's sleek pen-and-ink studies in an article on the progress of the White House project in the Philadelphia Inquirer.

Affectionately known as the Emmy, this award was presented to First Lady Jacqueline Kennedy for her television tour of the White House that aired on CBS in February of 1962. A statuette of a winged woman holding an atom became the symbol of the TV Academy's goal of supporting and uplifting the arts and science of television: the wings represent the muse of art; the atom the electron of science.

Watercolor painting of the White House with horses on a path and figures on the lawn in the foreground, painted by Jacqueline Kennedy c. 1962 and given to her husband as a gift. The President chose to display this painting in his Oval Office of the White House.

This statue was presented to President and Mrs. Kennedy by Egyptian President Gamal Abdel Nasser in gratitude for their work to save the temples of Abu Simbel. First Lady Jacqueline Kennedy helped to organize international support to move the temples before they were forever lost by the flooding of the Nile during construction of the Aswan Dam. The three-foot Egyptian statue was presented to her by the government of Egypt at the opening of the King Tutankhamen exhibit in Washington, D.C., on November 3, 1961.