"I believe that this nation should commit itself to achieving the goal, before this decade is out, of landing a man on the moon and returning him safely to earth.” - President John F. Kennedy, May 25, 1961 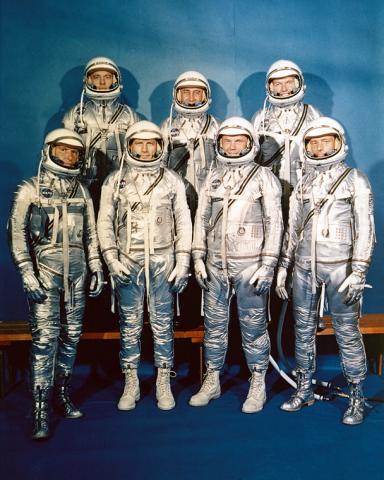 The U.S. space program went full throttle in 1961 when President John F. Kennedy challenged the nation to claim a leadership role in space and land a man on the Moon before the end of the decade. On display is this exhibit are documents and photographs chronicling the key events in the nation's space program during the Kennedy Administration. A video presentation features archival footage of Astronauts Alan Shepard and John Glenn's respective space missions and excerpts from President Kennedy's September 12, 1962 speech at Rice University in Houston, Texas where he restated the nation's resolve of landing a man on the moon and returning him safely to the earth before the end of the decade.

Project Mercury was NASA’s first manned space flight program, undertaken in 1958. In one of its six manned missions, on May 5, 1961, U.S. Navy Commander Alan B. Shepard, Jr., soared into history. Crammed into this Mercury Space Capsule that he named Freedom 7, Shepard, a native of East Derry, New Hampshire, became the first American to travel in space. Clamped atop a Redstone rocket nearly 7 stories high, the capsule was blasted into sub-orbital flight that laid to rest any doubts that man could function in space—at least for a short period. In a mission that lasted just over 15 minutes, Alan Shepard managed and monitored 27 events and communicated with Mercury Control 78 times.

Freedom 7’s mission was a milestone along the course charted by President Kennedy to make the United States number one in the world in space exploration. Three weeks after this capsule safely splashed down in the Atlantic Ocean, President Kennedy announced to the nation the goal of landing a man on the moon and returning him safely to earth before the end of the decade. 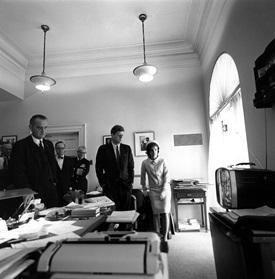 On February 20, 1962, Marine Corps Lieutenant Colonel John H. Glenn, Jr. piloted the Friendship 7 spacecraft  on the first American manned orbital mission. John Glenn blasted into orbit as part of a space race between the United States and the Soviet Union in which the Americans were lagging. He completed three orbits around the earth. The mission duration from launch to impact was 4 hours, 55 minutes, and 23 seconds. As President Kennedy had hoped, the successful space flight did much to restore American prestige worldwide.

President Kennedy made clear his administration's priority for the United States to land a man on the moon before the Soviet Union in a White House meeting that took place on November 21, 1962. America responded with one of the greatest mobilizations of resources and manpower in U.S. history. He later stated "We choose to go to the moon! We choose to go to the moon in this decade and do the other things, not because they are easy, but because they are hard." This goal was achieved on July 20, 1969, when two American astronauts walked on the Moon. It was a stunning achievement that boosted American confidence and prestige at home and around the world.

Launch of the Mercury MR-3 Freedom 7 Space Capsule piloted by Alan Shepard, from a Redstone rocket on May 5, 1961.

On May 5, 1961 Alan Bartlett Shepard, Jr. (November 18, 1923 – July 21, 1998) piloted Freedom 7, the Mercury-Redstone 3 flight designed to enter space, but not to achieve orbit. He was the second person and the first American to travel into space. Ten years later, Shepard commanded the Apollo 14 mission. He became the 5th person to walk on the Moon, and the only astronaut of the Mercury Seven to walk on the Moon.

A Marine helicopter recovers Astronaut Alan Shepard and the Freedom 7 capsule from the Atlantic Ocean to carry them to a waiting aircraft carrier, May 5, 1961.

Engineers who examined the capsule after the flight found it to be in excellent shape and determined that “it could easily be used again”; doctors examined Alan Shepard and likewise concluded that the astronaut “could be used again, too.” Ten years later, Shepard commanded the Apollo 14 mission, and became the fifth person to walk on the Moon.

Seven military test pilots were recruited by NASA to be the nation’s first astronauts. Americans were captivated by the “Mercury Seven”—the silver-suited, techno-speaking astronauts who blasted off into space with impossible coolness, pursuing one of the deepest and most ancient dreams of mankind. Their achievements made it possible for the United States to advance to the Gemini and Apollo projects. Their great public appeal helped to sustain support of the space program in its early years.

This photograph was taken at B.F. Goodrich, the company that manufactured the space suits. It was the only occasion that all seven appeared together in the suits.

In this excerpt, President Kennedy discusses the need to make further advances in space. JFK supercharged the nation's space program when he identified the goal of landing a man on the Moon as a national priority to be fulfilled within a fixed time frame: "before the end of the decade." He asks Congress to provide funding for the development of appropriate lunar space craft, nuclear rockets, and communication and weather satellites.

Lunar sample made of mare basalt encased in a glass pyramid with rectangular base. This piece of moon rock was brought back to earth by Apollo 15 mission on August 7, 1971. The rock, called "breccia", weighs 160 grams and is more than three billion years old. 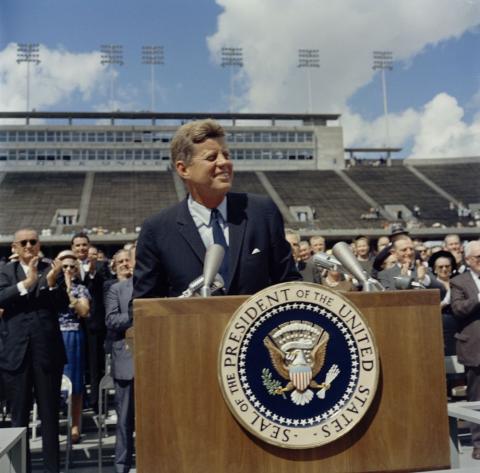