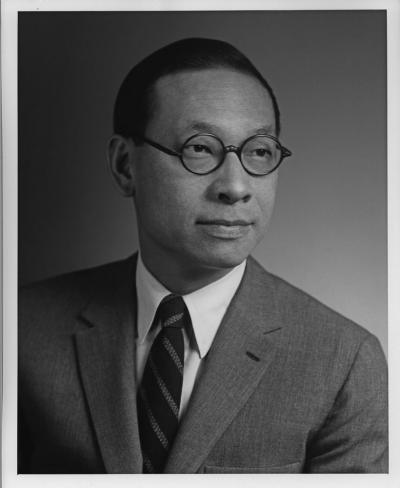 Jacqueline Kennedy played a major role in the selection of I.M. Pei to be the architect of the Kennedy Library. At an early meeting in 1964, Mr. Pei explained to Mrs. Kennedy, somewhat apologetically, that as a relatively young architect he had not worked on monumental projects. Though relatively unknown and obscure at the time, Mrs. Kennedy nevertheless selected Pei from a list of candidates that included of some America’s best-known architects. He seemed to her so filled with promise and he had the imagination and temperament to create a structure that would reinforce her vision of the goals of the library.

Ieoh Ming Pei was born in Canton, China in 1917. He left China when he was eighteen to study architecture at MIT and Harvard. Between 1942 and 1945, he worked as a concrete designer for Stone and Webster, and in 1946 he began work in the office of Hugh Asher Stubbins, in Boston.

Pei worked as an instructor and then as an assistant professor at Harvard before he joined Webb & Knapp Inc. in New York in 1948. Pei worked as the head of the architectural division of Webb and Knapp, Inc. until 1960, when he resigned and founded his own architectural office, I. M. Pei & Partners, New York, which in 1979 became Pei, Cobb, Free & Partners.

Due to his reliance on abstract form and materials such as stone, concrete, glass, and steel, Pei had been considered a disciple of Walter Gropius. However, Pei showed little concern with theory. He did not believe that architecture must find forms to express the times or that it should remain isolated from commercial forces.

Pei generally designed sophisticated glass-clad buildings loosely related to the high-tech movement. However, many of his designs result from original design concepts. He frequently worked on a large scale and was renowned for his sharp, geometric designs.

The John F. Kennedy Library Corporation originally commissioned Pei in December 1964 to design a building for a site adjacent to Harvard University in Cambridge. Pei’s initial design for the Library included a truncated glass pyramid symbolizing President Kennedy’s abrubtly cut-off life, a design that re-emerged 25 years later in I.M. Pei’s design for the expansion of the Louvre Museum in Paris.

Delays in freeing the site for construction and local concerns about possible urban congestion resulted in a decision in 1976 to build the library adjacent to the Harbor Campus of the University of Massachusetts Boston at Columbia Point in Dorchester on a site that was donated to the Library Corporation by the University and approved by the state legislature.

The new 9.5 acre site was situated on the tip of the 280-acre Columbia Point Peninsula overlooking the entrance to Boston Harbor and the islands to the east of Dorchester Bay. Mrs. Onassis was tremendously pleased with the selection of Columbia Point in Dorchester, because of the symbolism of having the facility near the childhood home of John Kennedy's mother and, most importantly, because of the beauty of the adjacent harbor and the love that President Kennedy had for the ocean.

Pei, and his associate Ted Musho, started all over again to design a building uniquely appropriate to the new site.

Ground breaking for the Kennedy Library building took place on June 12, 1977. Construction started in August 1977, with the driving of over 400 concrete piles, some 150 feet to rock.

The Kennedy Library was erected on a landfill site overlooking Boston, Dorchester Bay, and the ocean beyond. To overcome existing conditions, the site was raised 15 feet. Within a limited space and budget, the design had to fulfill a complex-mixed use program while symbolically remembering the late young president in terms both contemporary and timeless. A split-level design was developed, organizing museum spaces in a layer below ground, with key emotive elements dramatically isolated above.

Pei’s solution consisted of a triangular nine-story tower housing archival, educational and administrative functions, a two-story base containing exhibition space and two 230-seat theaters, and a 115-foot high memorial pavilion, which gives coherence and focus to the whole. After viewing a film about President Kennedy's early life, visitors descend into linked exhibition areas highlighting the president's 1960 campaign, his administration, and his legacy. From this darkened setting they emerge into the sun-filled, silent void of the space-framed glass pavilion. Except for an enormous American flag suspended above, the space is empty to allow the viewer to contemplate what he has seen and experienced against a great panorama of sky, land and open sea.

The precast panels cladding the concrete structural frame were cast in North Wilbraham, Massachusetts, trucked to the site, and fitted into place like a three-dimensional jigsaw puzzle. The space frames for the roof and walls of the Pavilion were first assembled on the ground and then lifted one at a time into place by crane, one entire space frame wall weighing no more than one of the larger precast wall panels.

More than 225 construction workers, including 34 tradesmen and management staff of the Turner Construction Company, were responsible for turning architect I.M. Pei's vision into reality. The final construction cost was $12 million – the entirety raised by private contributions. Thirty million people had contributed more than $20 million to the Library's construction fund, a measure of the sense of loss experienced around the world following President Kennedy's death, and the universal desire to commemorate his life.

Construction of the John F. Kennedy Presidential Library and Museum was completed in 1979. The Library was officially dedicated on October 20, 1979 at a ceremony attended by President Jimmy Carter, who accepted the privately built library on behalf of the American people.

In describing his architectural masterpiece for the Dedication Program, I.M. Pei wrote:

"Its openness is the essence. After witnessing the film, after leaving the concentrated exhibition area with its many photographs and memorabilia, people will conclude their visit to the Library in a restful place where they can linger, look at the view, and reflect on what they have seen. In the silence of that high, light-drenched space, the visitors will be alone with their thoughts. And in the reflective mood that the architecture seeks to engender, they may find themselves thinking of John F. Kennedy in a different way. In the skyline of his city, in the distant horizons toward which he led us, in the canopy of space into which he launched us, visitors may experience revived hope and promise for the future."

In 1991, the Kennedy Library added the 21,800 square foot Stephen E. Smith Center, also designed by I. M. Pei. Constructed in the same stark white precast concrete as the original building, the two-story addition contains spaces for lectures, conferences, and meetings as well as more archival storage. The new wing was named in honor of President Kennedy’s brother-in-law who, as President of the John F. Kennedy Library Corporation, led the effort that resulted in the initial construction of the Library at Columbia Point.

I.M. Pei designed over fifty projects in this country and abroad, many of which have been award winners. His more prominent commissions have included the East Building of the National Gallery of Art, Washington, D.C.; Le Grand Louvre in Paris, France; the Bank of China in Hong Kong; the John Fitzgerald Kennedy Library in Boston; the National Center for Atmospheric Research, Boulder, Colorado; the Dallas City Hall in Texas; The Morton H. Meyerson Symphony Center in Dallas, Texas; the Society Hill development in Philadelphia, Pennsylvania; the Overseas Chinese Banking Corporation Centre (OCBC) and Raffles City in Singapore; the West Wing of the Museum of Fine Arts, Boston; the Fragrant Hill Hotel near Beijing, China; Creative Artists Agency Headquarters in Beverly Hills, California; the Jacob K. Javits Center in New York; an IBM Office Complex in Somers, NY and another in Purchase, NY; the Everson Museum of Art, Syracuse, New York; and the Texas Commerce Tower in Houston.

As a student, he was awarded the MIT Traveling Fellowship, and the Wheelwright Traveling Fellowship at Harvard. His subsequent honors include the following: the Brunner Award,the Medal of Honor of the New York Chapter of the AIA, the Thomas Jefferson Memorial Medal for Architecture, the Gold Medal for Architecture of the American Academy of Arts and Letters, the Alpha Rho Chi Gold Medal, la Grande Medaille d'Or of l'Academie d'Architecture (France), and The Gold Medal of The American Institute of Architects. In 1982, the deans of the architectural schools of the United States chose I.M. Pei as the best designer of significant non-residential structures.