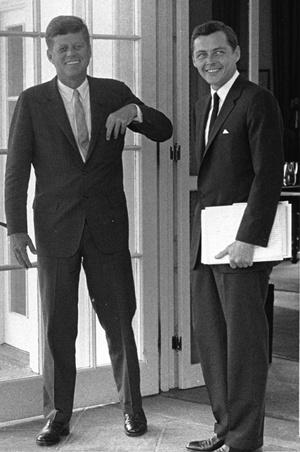 As Senator Edward Kennedy wrote to him in 1976, "....we are in the ninth inning on this Library but what remains is the tone and the spirit which the building radiates ... whether it will reflect Jack and Bobby and all they represented. You are the one who understands that and feels better than anyone. You know that it can be completed. I know you are not looking for gratitude but you have mine."

Stephen Smith led the fundraising efforts for the construction of the Library, oversaw the search for an alternative site in Boston, managed the financing and construction of the architectural masterpiece, and orchestrated the official dedication and opening ceremonies held on October 20, 1979. Later, he was instrumental in establishing the John F. Kennedy Library Foundation, and in developing an endowment for the Library Foundation.

Stephen Edward Smith was born in Brooklyn on September 24, 1927, the youngest of five boys. He attended Polytechnic Prep, where he was an outstanding athlete. While studying history and social sciences at Georgetown University, he met his future wife of thirty-four years, Jean Kennedy. Together they raised four children: Stephen, Jr., William, Amanda, and Kym.

Stephen Smith became the political advisor and campaign manager for the presidential campaigns of John, Robert, and Edward Kennedy. After the death of Joseph P. Kennedy, Sr., he served as the chief overseer of the Kennedy family investments as Chairman and Chief Executive Officer of Joseph P. Kennedy Enterprises, Inc. He was loved and respected by three generations of the Kennedy family.

Said Senator Edward M. Kennedy of his brother-in-law, "For over thirty years, he gave his heart, his soul, his love, his talent, and his life to our family. He was serious about everything, but he never took himself too seriously about anything. He was a remarkably private and self-effacing man, but with an immensely powerful presence. When the two of us walked in a room together, people were only half-joking when they would ask, 'Who's that with Steve Smith?’”

Stephen Smith died on August 19, 1990. In February 1991, the Kennedy Library’s new 21,800 square foot wing designed by I.M. Pei was dedicated as The Stephen E. Smith Center to honor the man who was the driving force behind the construction of the John F. Kennedy Presidential Library and Museum.