Planning for the building of the John F. Kennedy Presidential Library and Museum began in December 1963, in the sad days following the death of President Kennedy. From the start, it was the dream of Jacqueline Kennedy Onassis that the library would be a place where people could search for historic truth, learn more about politics and government, and reflect on the need to serve the public in some way. She wanted the building itself to be a magnificent work of art celebrating the energy, grace, dignity and boldness that John Kennedy, and those associated with him, brought to the world of politics and public service.

In a 1964 statement on the plans for the Kennedy Library, Mrs. Onassis wrote:

My husband had looked forward to retiring to his library at the end of his time in Washington. Now he will not see the building to be erected in his name. But his parents and brothers and sisters and I all look on it as his most fitting memorial. Because John Kennedy was so involved in life, his library will be not just a repository of papers and relics of the past. It will also be a vital center of education and exchange and thought, which will grow and change with the times.

John Kennedy believed strongly that one's aim should not be the most comfortable life possible—but that we should all do something to right the wrongs we see—and not just complain about them. We owe that to our country, and our country will suffer if we don't serve her. He believed that one person can make a difference—and that every person should try.

I hope that in the years to come many of you and your children will be able to visit the Kennedy Library. It will be, we hope, not only a memorial to President Kennedy but a living center of study of the times in which he lived, which will inspire the ideals of democracy and freedom in young people all over the world. His library will be your library, for when the building is completed it will be turned over to the government and become the property of the people of the United States forever."

Jacqueline Kennedy Onassis played a major role in the selection of I.M. Pei to be the architect of the Kennedy Library. At an early meeting, Mr. Pei explained to Mrs. Onassis, somewhat apologetically, that as a relatively young architect he had not worked on monumental projects. Mrs. Onassis, nevertheless, chose him. He seemed to her so filled with promise and he had the imagination and temperament to create a structure that would reinforce her vision of the goals of the library.

When a site in Cambridge for the Kennedy Library proved to be impractical, Mrs. Onassis joined in the search for a new location. She was tremendously pleased with the selection of Columbia Point in Dorchester, because of the symbolism of having the facility near the childhood home of John Kennedy's mother, Rose Fitzgerald Kennedy, and, most importantly, because of the beauty of the adjacent harbor and the love that President Kennedy had for the ocean.

Mrs. Onassis was deeply involved in two new programs of the recently-formed Kennedy Library. The library created the first large oral history project ever undertaken by a presidential library. The goal of this bold endeavor was to record the recollections of members of the administration and those who knew and worked with the president. The program succeeded, in large part, because it had the constant encouragement and full support of Mrs. Onassis.

The acquisition of the papers of Ernest Hemingway was designed to expand the scope of the Kennedy Library's work. "Nothing would have pleased my husband more," Mrs. Onassis said when the gift was announced in 1968, "because this collection of papers will do much to fulfill our hope that the library will become a center for the study of American civilization in all its aspects in these years."

Mrs. Onassis quietly shared the joy of all those associated with the library when the facility was dedicated on October 20, 1979 at a ceremony attended by President Jimmy Carter and members of President Kennedy's family. She had done so much to make it possible, yet she recognized that the work was not complete. In 1984 she joined in the creation of the Kennedy Library Foundation, and became, with Senator Edward Kennedy, an honorary chairperson of the board of directors.

In 1987, Caroline Kennedy was elected president of the John F. Kennedy Library Foundation. Mrs. Onassis continued to participate actively in library events, while constantly encouraging members of her family and her friends to expand their efforts in helping her initial dreams for the Kennedy Library become reality.

In October, 1993 Mrs. Onassis participated in the opening of the new museum at the Kennedy Library. She very proudly acknowledged the work that Caroline Kennedy and her husband, Edwin Schlossberg, had done in designing a set of exhibits that would provide people of all ages—but especially young people—with a better understanding of the dramatic events and decisions of the 1960s and a realization of all that can be accomplished through courageous political leadership. 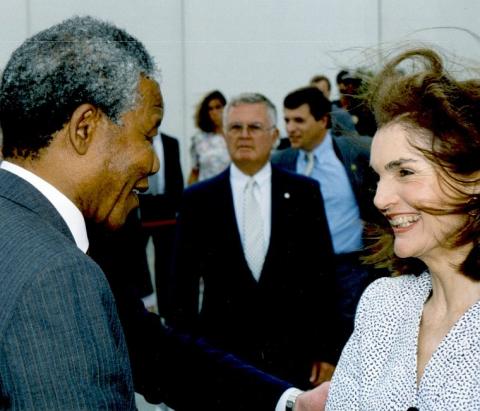 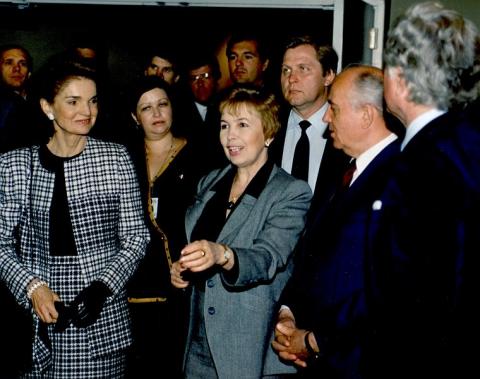