Senators, we hear, must be politicians – and politicians must be concerned only with winning votes, not with statesmanship or courage. Mothers may still want their favorite sons to grow up to be President, but according to a famous Gallup poll of some years ago, they do not want them to become politicians in the process.

Perhaps if the American people more fully comprehended the terrible pressures which discourage acts of political courage, which drive a Senator to abandon or subdue his conscience, then they might be less critical of those who take the easier road - and more appreciative of those still able to follow the path of courage.

The first pressure to be mentioned is a form of pressure rarely recognized by the general public. Americans want to be liked – and Senators are no exception... We [Senators] prefer praise to abuse, popularity to contempt... we [Senators] are anxious to get along with our fellow legislators, our fellow members of the club, to abide by clubhouse rules and patterns... “The way to get along,” I [John Kennedy] was told when I entered Congress, “is to go along.”

Going along means more than just good fellowship – it includes the use of compromise, the sense of things possible. We should not be too hasty in condemning all compromise as bad morals. For politics and legislation are not matters for inflexible principles or unattainable ideals.

Some of my colleagues who are criticized today for lack of forthright principles – or who are looked upon with scornful eyes as compromising “politicians” – are simply engaged in the fine art of conciliating, balancing and interpreting the forces and factions of public opinion, an art essential to keeping our nation united and enabling our Government to function.

But the question is how we will compromise and with whom. For it is easy to seize upon unnecessary concessions, not as means of legitimately resolving conflicts but as methods of “going along.”

It is thinking of the next campaign – the desire to be re-elected – that provides the second pressure on the conscientious Senator...

Defeat, moreover, is not only a setback for the Senator himself – he is also obligated to consider the effect upon the party he supports, upon the friends and supporters who have “gone out on a limb” for him or invested their savings in his career, and even upon the wife and children whose happiness and security – often depending at least in part upon his success in office – may mean more to him than anything else.

Where else, in a non-totalitarian country, but in the political profession is the individual expected to sacrifice all – including his own career – for the national good? ...

Lawyers, businessmen, teachers, doctors, all face difficult personal decisions involving their integrity – but few, if any, face them in the glare of the spotlight as do those in public office. Few, if any, face the same dread finality of decision that confronts a Senator facing an important call of the roll. He [Senator] may want more time for his decision – he may believe there is something to be said for both sides – he may feel that a slight amendment could remove all difficulties – but when that roll is called he cannot hide, he cannot equivocate, he cannot delay, like the Raven in Poe’s poem, is perched there on his Senate desk, croaking “Nevermore” as he casts the vote that stakes his political future.

Not all Senators would agree – but few would deny that the desire to be re-elected exercises a strong brake on independent courage.

The third and most significant source of pressures which discourage political courage in the conscientious Senator or Congressman – and practically all of the problems described in this chapter apply equally to members of both Houses - is the pressure of his constituency, the interest groups, the organized letter writers, the economic blocs and even the average voter.

If we tell our constituents frankly that we can do nothing, they feel we are unsympathetic or inadequate. If we try and fail – usually meeting a counteraction from other Senators representing other interests – they say we are like all the rest of the politicians...

We may tell ourselves that these pressure groups and letter writers represent only a small percentage of the voters – and this is true. But they are the articulate few whose views cannot be ignored and who constitute the greater part of our contacts with the public at large, whose opinions we cannot know, whose vote we must obtain and yet who in all probability have a limited idea of what we are trying to do.

But there is no real problem, some will say. Always do what is right, regardless of whether it is popular. . . .

That is an easy answer – but it is easy only for those who do not bear the responsibilities of elected office. . . . Are we rightfully entitled to ignore the demands of our constituents even if we are able and willing to do so?

[In addition to those pressures cited above that make political courage a difficult course, there are obligations to one's state and section, to one's party and above all to one's constituents.]

The primary responsibility of a Senator, most people assume, is to represent the views of his state... Who will speak for Massachusetts if her own Senators do not? ... Her equal representation in Congress is lost...

And if such interests are ever to be abandoned in favor of the national good, let the constituents – not the Senator – decide when and to what extent. For he is their agent in Washington, the protector of their rights, recognized by the Vice President in the Senate Chamber as “the Senator from Massachusetts” or “the Senator from Texas.”

But when all of this is said and admitted, we have not yet told the full story. For in Washington we are “United States Senators” and members of the Senate of the United States as well as Senators form Massachusetts and Texas. Our oath of office is administered by the Vice President, not by the Governors of our respective states; we come to Washington, to paraphrase Edmund Burke, not as hostile ambassadors or special pleaders for our state or section, in opposition to advocates and agents of other areas, but as members of the deliberative assembly of one nation with one interest.

There are other obligations in addition to those of state and region – the obligations of the party whose pressures have already been described. Even if I [John Kennedy] can disregard those pressures, do I not have an obligation to go along with the party that placed me in office? We believe in this country in the principle of party responsibility, and we recognize the necessity of adhering to party platforms – if the party label is to mean anything to the voters.

But when party and officeholder differ as to how the national interest is to be served, we must place first the responsibility we owe not to our party or even to our constituents, but to our individual consciences.

But it is a little easier to dismiss one’s obligations to local interests and party ties than to face squarely the problem of one’s responsibility to the will of his constituents. A Senator who avoids this responsibility would appear to be accountable to no one, and the basic safeguards of our democratic system would thus have vanished. He is no longer representative in the true sense, he has violated public trust, he has betrayed the confidence demonstrated by those who voted for him to carry out their views.

It is difficult to accept such a narrow view of the role of United States Senator – a view that assumes the people of Massachusetts sent me to Washington to serve merely as a seismograph to record shifts in popular opinion...

The voters selected us, in short, because they had confidence in our judgment and our ability to exercise that judgment from a position where we could determine what were their own best interests, as a part of the nation's interest. This may mean that we must on occasion lead, inform, correct and sometimes even ignore constituent opinion, if we are to exercise fully that judgment for which we were elected.

Today the challenge of political courage looms larger than ever before. For our everyday life is becoming so saturated with the tremendous power of mass communications that any unpopular or unorthodox course arouses a storm of protests such as John Quincy Adams – under attack in 1807 – could never have envisioned. Our political life is becoming so expensive, so mechanized and so dominated by professional politicians and public relations men that the idealist who dreams of independent statesmanship is rudely awakened by the necessities of election and accomplishment...

And thus, in the days ahead, only the very courageous will be able to take the hard and unpopular decisions necessary for our survival in the struggle with a powerful enemy – an enemy with leaders who need give little thought to the popularity of their course, who need pay little tribute to the public opinion they themselves manipulate, and who may force, without fear of retaliation at the polls, their citizens to sacrifice present laughter for future glory.

We shall need compromises in the days ahead, to be sure. But these will be, or should be, compromises of issues, not of principles. We can compromise our political positions, but not ourselves... Compromise does not mean cowardice. Indeed it is frequently the compromisers and conciliators who are faced with the severest tests of political courage as they oppose the extremist views of their constituents. 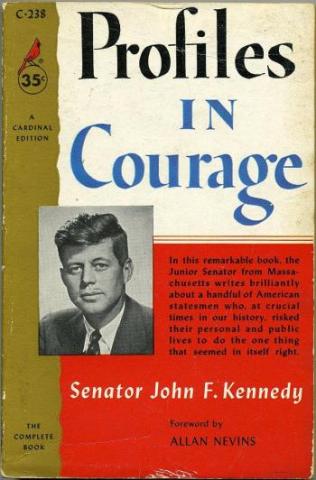 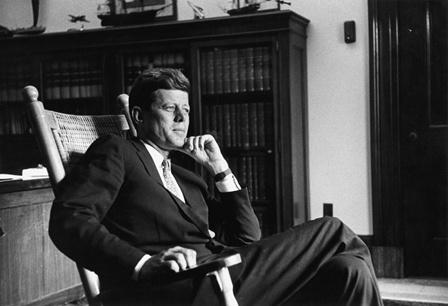