Gabrielle Giffords was elected to Arizona's 8th Congressional District seat in 2006, after more than five years of service in the Arizona House of Representatives and State Senate. In Congress, she quickly became a leading policymaker on border security, energy independence, and support for military families and veterans. In 2010, she was the target of death threats and her office was vandalized following her vote in favor of health care reform.

On January 8, 2011, Giffords and eighteen others were shot during a constituent meeting she was holding in a supermarket parking lot in Casas Adobes, Arizona, in the Tucson metropolitan area. Six people died, including Arizona District Court Chief Judge John Roll; Gabe Zimmerman, one of Rep. Giffords' staffers; and a nine-year-old girl, Christina-Taylor Green. Giffords was holding the meeting, called "Congress on Your Corner" in the parking lot of a Safeway store when Jared Lee Loughner drew a pistol and shot her in the head at point-blank range before proceeding to fire on other people. After a year of rehabilitation, she resigned from Congress in order to focus on her recovery. On the second anniversary of the shooting, Giffords and her husband, retired Navy Captain and astronaut Mark Kelly, launched Americans for Responsible Solutions to encourage elected officials to support measures to prevent gun violence and promote responsible gun ownership. 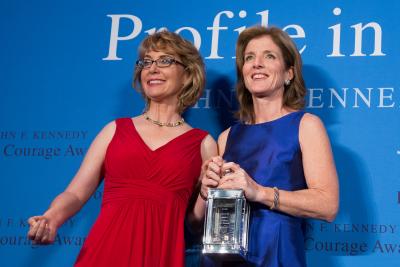 Thank you so much for recognizing my wife’s extraordinary courage. To be honored along with people she admires deeply – like Congressman John Lewis, or your own Senator Edward Kennedy – is amazing to Gabby, I know.

But I have to say: not to me. The determination and valor my wife Gabby Giffords displays every day has redefined the word “courage” for me.

Gabby and I have spent a lot of time at another place that honors President John F. Kennedy, the Kennedy Space Center in Florida, the only place on the globe from which humans have departed our planet to go to the Moon, and from where I commanded both space shuttle Discovery and Endeavour.

And while it is not our first time here at the Kennedy Library in Boston we are so glad to be back. We are so sorry for the violence and terror you have endured. We know what that is like. I saw combat in Iraq and Kuwait, and Gabby lived through a mass shooting. We know how violence changes lives.

We know that for those touched by violence, it matters less what you call it –crime, terrorism, war, madness – because violence defies categories. It simply and brutally draws a line in the sands of time – before, and after. Before, when Gabby could ride her motorcycle around the foothills of the southern Arizona desert, and speak easily and often to her neighbors. And after.

Before, when for Christina Taylor Green’s parents in Tucson, or Martin Richard's parents here in Dorchester, they could go to sleep wondering what wonderful thing their child would say when they woke up the next morning. And after.

We extend our deepest sympathies to all of you who have endured violence and loss here.

But courage, for us, is about the “after." Courage is about doing everything we can – everything we possibly can – to make sure fewer parents face that loss. For me, it’s meant learning more about politics – previously, I handled the space travel responsibilities in the marriage and Gabby handled the politics. Now we do the politics together.

For Gabby, her Courage is the equivalent of a lunar shot. She has set her sights on a distant horizon – a country dramatically safer from gun violence – and she works hard every day, with physical therapy, speech therapy, yoga – to make sure she’s in shape to get there.

And there are many doubters. Many who think the NRA and the rest of the gun lobby is simply too powerful. Many who think our deep and patriotic support of the 2nd amendment – which Gabby and I share – will prevent us from making progress. Many who saw the failure of the Senate to pass background checks last week and have thrown up their hands in anger and disgust.

Gabby Giffords is a person who makes things happen. She has chosen to help inspire, organize, and motivate a nation that is fed up with violence, and congressional inaction, and to focus us on coming together and taking concrete steps that will keep families and communities safer.

Her courage inspires us daily, but I know she is inspired by the courage of those who came before her – and those hundreds of thousands of Americans, all across the country, who are joining her every day.

Who are sending checks for $5 or $10, money they need in these tough times, to help. Who are taking to facebook, to twitter, to stand shoulder to shoulder with her. Who are talking to friends at the grocery store and at the water cooler and on the playground and saying: we can do better and

I’m standing with Gabby to get it done.

I know she is inspired by the courage of her friend and staffer, Gabe Zimmerman, who ran toward her and toward danger during the terrible shooting in Tucson, and lost his life trying to help.

President Kennedy said “The stories of past courage…can teach, they can offer hope, they can provide inspiration. But they cannot supply courage itself. For this each man must look into his own soul.”

Gabby’s courage is limitless, and it is powerful. We thank you so much for recognizing, and honoring that. And we ask for your courage in joining us to make sure we achieve our goal of a safer America for all of us.