"To our sister republics south of our border, we offer a special pledge – to convert our good words into good deeds – in a new alliance for progress – to assist free men and free governments in casting off the chains of poverty." -- John F. Kennedy, Inaugural Address, January 20, 1961

US relations with Latin America had been deteriorating steadily in the decade before JFK entered the White House. The Eisenhower administration had openly supported military dictators in Peru, Paraguay, and Venezuela, and Vice President Nixon had praised Cuban autocrat Fulgencio Batista as "Cuba's Abraham Lincoln."

Not surprisingly, Latin Americans resented these policies. President Kennedy was determined to improve relations with Latin America through peaceful economic cooperation and development—which would also inhibit the rise of communist-leaning insurgents such as Cuba's Fidel Castro. Kennedy proposed, through the Agency for International Development and the Alliance for Progress, both launched in 1961, to loan more than $20 billion to Latin American nations that would promote democracy and undertake meaningful social reforms, especially in making land ownership possible for greater numbers of their people. At the time, it was the largest US aid program created for the developing world.

Kennedy called the Alliance for Progress "a vast cooperative effort, unparalleled in magnitude and nobility of purpose to satisfy the basic needs of the [Latin] American people for homes, work and land, health and schools – techo, trabajo y tierra, salud y escuela." Speaking in the White House on March 13, 1961, to more than two hundred Latin American diplomats, he acknowledged a discomforting fact: "Let me be the first to admit that we North Americans have not always grasped the significance of this common mission." But, at the same time, he declared that "many in your own countries have not fully understood the urgency of the need to lift people from poverty and ignorance and despair." 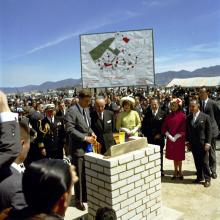 In August, 1961, at Punta del Este, Uruguay, in remarks delivered on his behalf to the assembled delegates at the Inter-American Economic and Social Council, JFK stressed that the Alliance aimed to achieve "full recognition of the right of all the people to share fully in our progress. For there is no place in democratic life for institutions which benefit the few while denying the needs of the many" – which meant the inclusion "of workers and farmers, businessmen and intellectuals, and above all, of the young people of the Americas." At this meeting, the United States and all Latin American states except Cuba endorsed the Charter of Punta del Este, promoting land and tax reform, democratic government and economic modernization.

The president compared the Alianza to the Marshall Plan but, at the same time, he knew that Congress would never appropriate anything remotely comparable to the funds that were required to rebuild Western Europe after World War II. In addition, American business interests continued to be more concerned about the safety of their private investments in Latin America and far less troubled about promoting social and political reform. The Alliance would have to depend primarily on private investments and American business interests did not share the president's contempt for the corrupt elites that controlled the economies and governments of Latin America. And, in fact, Alliance funds were also used to create counterinsurgency programs and to train paramilitary forces to counter the spread of communist influence in Latin America. As a result, many Latin Americans remained deeply skeptical of American motives, although there was also widespread admiration throughout the hemisphere for JFK's energetic championing of the Alliance's goals.

Limits to the Alliance for Progress

The Alliance for Progress did not meet many of its goals. It did, however, produce some measurable achievements that affected individual people across the hemisphere. It supported the construction of housing, schools, airports, hospitals, clinics and water-purification projects as well as the distribution of free textbooks to students.

Even those who supported Kennedy's efforts were doubtful that the privileged and entrenched political and economic minorities in Latin America would peacefully embrace limits on their own power and wealth. In the end, escalating tensions between the US and Cuba, particularly the 1961 Bay of Pigs fiasco and the 1962 Cuban Missile Crisis, undermined much of the credibility of Kennedy's claim that the US was acting without self-interest in Latin America. Despite spending more than a billion dollars in its first year, not a single Latin American nation committed itself to a comprehensive development program. Meaningful economic and political reforms remained largely illusory, and in many cases the privileged elites became even richer and more repressive. From the point of view of Latin American nationalists, the Alliance was never able to overcome its identification with "Yankee imperialism." Presidents after Kennedy were less supportive of the program. By the early 1970s, the program was considered a failure and in 1973, the Organization of American States disbanded the permanent committee established to implement the Alliance.