Please note that intellectual and developmental disabilities were referred to in President Kennedy’s time as "mental retardation.” The Kennedy Library has chosen to use the term “intellectual disabilities” wherever possible here.

"We must promote--to the best of our ability and by all possible and appropriate means--the mental and physical health of all our citizens." - President Kennedy, February 5, 1963

The Kennedy family had a personal connection to the issue; the president's sister Rosemary, sixteen months his junior, was born with intellectual disabilities. 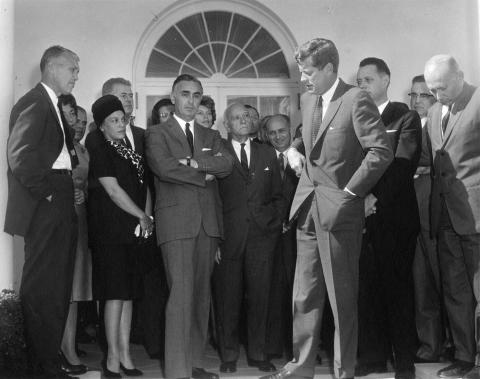 At the urging of Eunice Kennedy Shriver, Kennedy made intellectual disabilities a priority for his new administration. Before his inauguration, he created a transition task force. Once in office, he followed its recommendation to establish the National Institute of Child Health and Human Development. Still in existence today, the institute was charged with conducting and supporting research on intellectual disabilities as well as all aspects of maternal and child health and human development.

Nine months after the inauguration, at a press conference on October 11, 1961, President Kennedy announced his intention to appoint "a panel of outstanding scientists, doctors, and others to prescribe a plan of action in the field" intellectual disabilities. He added, "The central problems of cause and prevention remain unsolved, and I believe that we as a country, in association with scientists all over the world, should make a comprehensive attack." The 27-member panel met with President Kennedy at the White House on October 18, 1961.

The President's Panel on Mental Retardation

The president charged panel members with submitting their report by the close of 1962. The President's Panel on Mental Retardation spent a year busily gathering information, interpreting data, and debating solutions. They reconciled competing agendas and submitted their report ahead of deadline. At a meeting with the president on October 16, 1962, they presented more than 100 recommendations for a comprehensive federal approach to intellectual disabilities and urged him to "think and plan boldly."

President Kennedy used the panel's report as a blueprint to address those living with intellectual disabilities. On February 5, 1963, in a "Special Message to the Congress on Mental Illness and Mental Retardation," he announced "a bold new approach" to Intellectual disabilities. He outlined recommendations from the panel, including new programs for maternity and prenatal care, initiatives for moving away from "custodial institutions" to community-centered agencies, and plans for the construction of research centers that would include diagnostic, clinical, and treatment services. He also emphasized the importance of special education, training, and rehabilitation.

Eight months later, on October 24, 1963, President Kennedy signed the Maternal and Child Health and Mental Retardation Planning Amendment to the Social Security Act, the first major legislation to combat mental illness and intellectual disabilities. The amendment incorporated many of the panel's recommendations and provided planning grants to enable states to update their intellectual disabilities programs. It also increased funding for prevention through maternity and infant care.

In a special ceremony to celebrate the signing of the landmark legislation, President Kennedy remarked, "It was said, in an earlier age, that the mind of a man is a far country which can neither be approached nor explored. But, today, under present conditions of scientific achievement, it will be possible for a nation as rich in human and material resources as ours to make the remote reaches of the mind accessible. The mentally ill and the mentally retarded need no longer be alien to our affections or beyond the help of our communities."

President Kennedy and his family forever changed public attitudes toward people with intellectual disabilities. Their influence on related policies and programs can still be seen today. In the twenty years following the Kennedy administration, Congress passed 116 acts or amendments providing support for people with intellectual disabilities and their families.

Watch this event with audio description.