In January 1961, the new residents of the White House were young, sophisticated, and attractive. Many Americans considered the Kennedys a breath of fresh air. They abolished several old social conventions to create a more casual, comfortable atmosphere. Smoking was allowed in the State Rooms, cocktails were served, and receiving lines were almost completely eliminated in favor of a more casual approach to greeting guests. The Kennedys also focused on bringing the arts to Washington and the White House. Mrs. Kennedy had a portable stage set up in the East Room, where performers such as the Opera Society of Washington, mezzo-soprano Grace Bumbry and cellist Pablo Casals performed.

Remembering a childhood visit to the White House, Mrs. Kennedy told Life magazine, "From the outside I remember the feeling of the place. But inside, all I remember is shuffling through. There wasn't even a booklet you could buy. Mount Vernon and the National Gallery and the FBI made a far greater impression." Many years later, as she prepared to move in, Mrs. Kennedy was again struck by the bland quality of the rooms. She began cultivating her plans for the restoration of the White House.

A Question of Scholarship

Just weeks after her husband's inauguration, Mrs. Kennedy enlisted the famed decorator Dorothy Parish, or "Sister" as she was widely known, to help with the restoration of the White House. Within two weeks, the $50,000 budget had been spent on refurbishing the private living quarters. Undaunted, Mrs. Kennedy turned to Winterthur, Henry du Pont's estate-turned-museum, located outside Wilmington, Delaware. She hoped to acquire some antique furniture by loan. Winterthur Director Charles Montgomery suggested the formation of a committee of informed and connected people whose goal would be to acquire antique furnishings for the White House. The Fine Arts Committee was born, and Henry du Pont, was made chairman. He was widely considered to be the greatest collector of Americana and the most qualified authority on the subject of American historical decoration at the time.

Mrs. Kennedy enlisted Life magazine to help promote the renovation of the White House. She helped prepare a fully illustrated article outlining her plans that ran in the September 1961 issue, and participated in an interview with Hugh Sidey, in which she stated, "Everything in the White House must have a reason for being there. It would be sacrilege merely to redecorate it—a word I hate. It must be restored, and that has nothing to do with decoration. That is a question of scholarship."

As the project progressed, Mrs. Kennedy and Mr. du Pont saw the need for a permanent curator in the White House to deal with the growing collection. Lorraine Waxman Pearce became the first curator of the White House in late March 1961. By September, Congress sanctioned the restoration of the White House with Public Law 87-286, which officially declared the White House a museum. This act allowed the Fine Arts Committee and the curator's office to assure potential donors that their gifts would not be auctioned off or kept in the private collection of any president. It further protected the rooms of the White House from being radically altered in the future and clearly defined the project as historic preservation, rather than mere redecoration.

A Televised Tour of the White House

Mrs. Kennedy's White House restoration received lavish attention from the media, prompting offers from across the United States from people who wished to donate family heirlooms. Although many were unsuitable, an occasional treasure surfaced among the donations. Mrs. Kennedy and other committee members also solicited antiques that they spotted during the restoration. Media coverage of the event culminated in Mrs. Kennedy's guided tour of the White House on CBS, which aired on February 14, 1962. The show drew more than 80 million viewers and embellished the Kennedys' reputation as cultural gurus. Mrs. Kennedy was also awarded an honorary Emmy for her contribution to television. 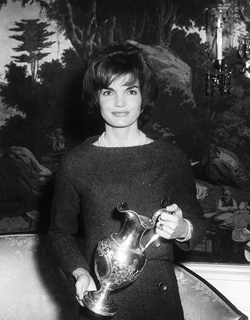 Another of Mrs. Kennedy's important contributions to preserving the White House was her plan for a guidebook. She envisioned a series of publications to explain every facet of the White House: its history, its architectural significance, and its contents. The White House Historical Association was established in 1961 for the publication of the guidebook and to oversee public programs involving the White House. Although the Kennedy restoration abruptly ended with the president's death in November 1963, most of the state rooms on the ground and first floors were complete. During the Johnson presidency, most of the rooms remained unchanged in deference to the Kennedys. The Kennedy restoration interiors were eventually altered as public taste and the philosophy of historic decoration evolved. Other first ladies, including Nancy Reagan, expressed an admiration for the Kennedy style and made an effort to recreate some of the designs. Despite the changes that took place over the years, many credit Mrs. Kennedy for setting the high standard in White House restoration and design. The public's continuing interest in the Kennedy White House is a testament to the enduring significance of their contributions.