Arts and Culture in the Kennedy White House

The Kennedys, however, made the arts part of their life in the White House. JFK enjoyed literature and poetry, especially the work of the Romantic era English poet Lord Byron and the American Robert Frost. Jacqueline Kennedy loved poetry as well and was also deeply committed to both music and the visual arts. There is little evidence that JFK was particularly sophisticated about the arts. He read widely, but never considered himself an intellectual or an original thinker. His musical tastes ran to Broadway show tunes and Irish ballads rather than Mozart or Beethoven. Once, when asked about the president’s taste in music, the first lady replied that his favorite piece was “Hail to the Chief.” 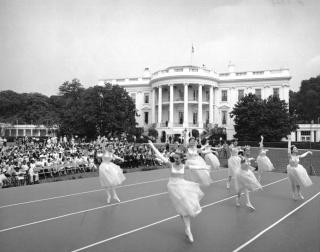 However, JFK did understand the importance of what Theodore Roosevelt had called the ‘bully pulpit,’ and was convinced that it was essential for the president to demonstrate a regard for and recognition of cultural and intellectual excellence. As a result, Kennedy eagerly accepted the idea of inviting Robert Frost to read a poem at the Inauguration and also agreed to invite more than fifty other writers, painters, poets and musicians to the ceremonies.

At an April 1962 White House dinner for Nobel Prize winners, Kennedy delighted his distinguished guests by calling them “the most extraordinary collection of talent, of human knowledge, that has ever been gathered together at the White House, with the possible exception of when Thomas Jefferson dined alone.”

The Kennedys’ support for the arts extended beyond contemporary artists to the next generation of Americans and included, for example, a series of “Concerts for Young People” at the White House sponsored by the first lady to encourage the study and performance of music by America’s youth.

The Role of the Arts in America

The following month, in honor of French Minister of Culture André Malraux’s visit to the White House, the Kennedys hosted a dinner attended by many of the nation’s leading artists, writers and musicians. In doing so, they hoped to focus national attention on the role of the arts in America and encourage the development of Washington as a cultural center. In his toast, President Kennedy affirmed that, “creativity is the hardest work there is” and playfully added that the White House “was becoming a sort of eating place for artists. But, they never ask us out.”

Malraux famously honored the president and first lady by promising Mrs. Kennedy at the end of the dinner that he would send to her France’s most famous cultural treasure, La Giaconda, the Mona Lisa. In December 1962, a special loan was made directly to the President of the United States and the American people by the government of the French Republic. Malraux accompanied the painting to the United States where more than 700,000 people saw it at the National Gallery of Art and more than a million others viewed it at the Metropolitan Museum of Art. President Kennedy expressed his appreciation for the loan and stated that, “We will continue to press ahead to develop an independent artistic force and power of our own.”

In the spring of 1962, JFK created the position of Special Consultant on the Arts. He recognized that the role of the federal government in the arts was historically and constitutionally limited, but nonetheless wanted to have access to advice in those areas where public policy had an artistic dimension—such as in the design of public buildings.

In May of that year, he strongly endorsed a report on Federal architecture emphasizing that the design of new buildings should provide "visual testimony to the dignity, enterprise, vigor, and stability of the American government." The report, which introduced The Guiding Principles for Federal Architecture, also stated that "...where appropriate, fine art should be incorporated in the designs [of Federal buildings], with emphasis on the work of living American artists." The General Services Administration Art in Architecture Program was then established to commission American artists to integrate their creative contributions in meaningful ways with an equally vibrant federal architecture.